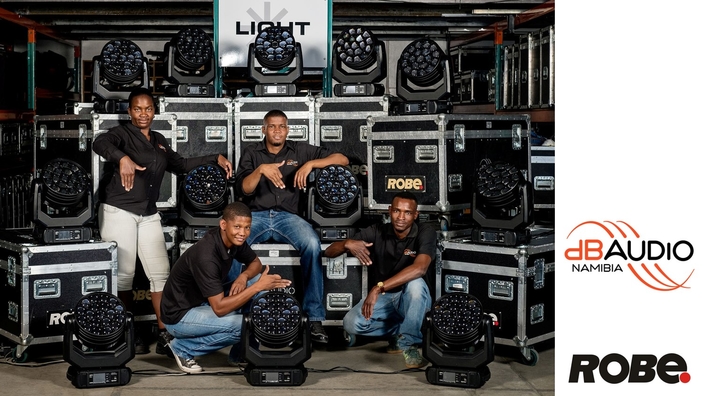 dB Audio in Namibia has continued its investment in Robe moving lights with the recent purchase of 12 Spiider LED wash beams … added to their inventory of over 150 Robe moving lights, the largest Robe stock in Namibia. The lights were supplied by DWR’s distributor for southern and central Africa, DWR and are the latest addition in a steady commitment to the brand which dates back 13 years by dB Audio, one of the busiest rental and production specialists in Namibia.

Owner and founder David Benade started the company in 2004, initially as an audio supplier, however it soon made sense to offer other production disciplines like lighting and rigging. At that point, audio was his specialist area, a competitor moving brand was dominant in the region, and, being a start-up, budget was tight!

All these things considered … he started researching and scouting around what might be a rising star lighting brand with a good future, a ‘one-to-watch’, and Robe popped up again and again! He started asking around and all his sources – both personal and via the internet - came back saying that Robe was definitely a new kid on the block – keen, enthusiastic, tails up  … but, also with a solid OEM manufacturing history and the capability of developing quality, well-built products!

So he decided to take the plunge and buy Robe! The first pieces of kit were two AT series 575 Spots. “I’ve not looked back since that day,” declares David.

In terms of market positioning, Robe’s meteoric trajectory has elevated it to being among the most respected manufacturers worldwide. It is also – by some considerable way – the brand that is strongest and most prevalent in the south of Africa, due to a combination of launching some excellent products over the years and the enthusiasm of DWR, its South African based distributor since 2007. 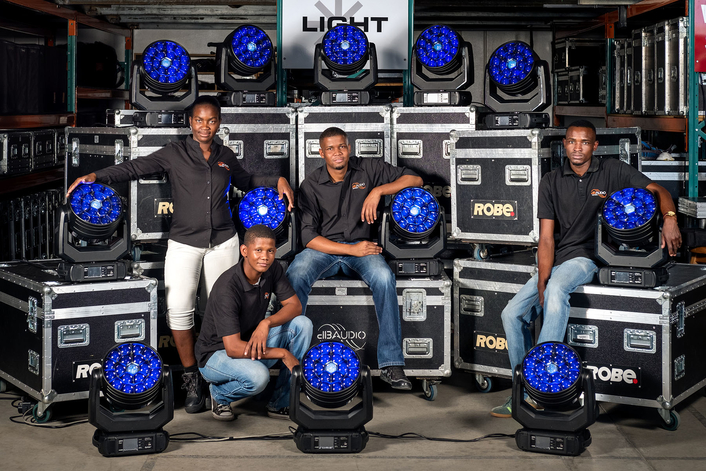 David recalls how it was a big decision at the time, “But one that’s totally paid off for our company and our market. Robe has given us fantastic support over the years and it’s been really gratifying to see their hard work pay off and make them a market leader.”

dB Audio was in fact so busy for the last two months of 2017 that they pulled out all their older Robe purchases including the original 575 Spot ATs … and a bunch of XT Series scanners … which were all still working!

Since 2010 – the launch of the LEDWash 600 and a turning point for Robe’s own product strategies, dB has invested in all the major product releases, including the LED Wash series, LEDBeam 100s and 1000s and more recently Pointes and BMFLs.

Being cutting edge has been part of the company’s philosophy since the start.

There’s also the fact that the cross rental market in Namibia is limited, and to hire extra kit from South Africa can be phenomenally expensive due to the transport costs, so the idea has also been to try and be as self-sufficient as possible with good equipment.

So when it came to purchasing some new LED washes, Spiiders were an obvious choice as specified by the dB lighting team led by Gillroy Barmann who commented, “Our Robe LEDWash series fixtures have worked extremely hard, so it was time to invest in the latest versions and take some pressure off the older stock”.

“It’s an incredible fixture with excellent output and plenty of flexibility at a good price  ... and it’s also going to be relevant for some time!” stated David.

The first job for the new dB Audio Spiiders was the Windhoek Jazz Festival in Independence Stadium, Windhoek (LD Ramon le Roux). dB’s Gillroy Barmann and Geraldo Papo then used them for the Hunter’s Roadshow, a high profile party in Ongwediva in the north of Namibia for the top SA cider brand … which needed to look fantastic. Ramon Le Roux included them again in his design for international singer Joss Stone’s one off performance at the Warehouse Theatre in Windhoek.