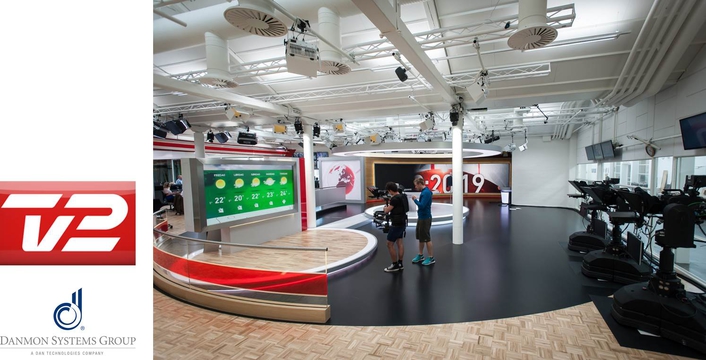 Upgrading the TV 2 news service from standard definition to high definition presented a logical opportunity to install a more visually attractive and versatile on-screen environment," explains Kjeld Skovlund, Head of Development at TV 2. "The new studio is located inside a large gallery  with the main presentation sets at one end and the weather presentation area at the other. Camera facilities include three robotic pedestals and a Steadicam system.”

“Production of daily news programmes is co-ordinated within the newsroom via an LSB Virtual Studio Manager and Mosart news automation system. This gives our operators access to control panels, interfaces and external devices via an IP infrastructure linked to a VSM-Studio server. Mosart uses a template-based structure which provides the security and predictability essential for our news service.”

"The live news set includes an 11 metre ultra-wide screen which presenters can use interactively rather than simply as a backdrop. This is illuminated by Barco projectors and provides a lot of creative options for studio interview programmes as well as presenter-to-camera shots.”

TV 2|DANMARK is a publicly owned television station in Denmark based in Odense. The station began broadcasting on 1 October 1988. It today has six subsidiary channels known as TV 2 Zulu, targeted at youth; TV 2 Charlie, oriented towards mature audiences; TV 2 News, a 24-hour news channel launched on 1 December 2006; TV 2 Film, a non-stop movie channel launched on 1 November 2005; and TV 2 Fri, a leisure and hobby channel launched on 5 May 2013, as well as the internet-based pay-per-view channel TV 2 Play which commenced in December 2004.