Danish Rockers D-A-D Get Down and Dirty With DPA

A selection of DPA Microphones is being used to ensure D-A-D’s fans enjoy the full benefit of the band’s loud, punchy sound
Rune Slot, live sound engineer for Danish rock band D-A-D, has turned to DPA Microphones to deliver the loud, punchy sound for which the band is famous. “I experimented with a number of different condenser microphones before settling for DPA,” Rune Slot says. “They are fantastic – awesome – and it’s really great to have high end microphones supplying the inputs to the desk.”

Slot has been on tour with D-A-D for most of this year, taking in countries such as China and the US as well as plenty of places in Europe. He says: “D-A-D is incredibly loud so for this tour I wanted to use high end microphones that could really capture the band’s noise and energy. The DPA microphones we have chosen are great and do the job perfectly.”

Originally known as Disneyland After Dark, D-A-D formed in the early 1980s and, apart from one change when Laust Sonne replaced former drummer Peter Lundholm Jensen, it has retained its original line-up. Its international breakthrough came in 1989 when it signed to Warner Bros in the USA. At that point the band was forced to change its name to D-A-D to avoid an impending lawsuit from the Walt Disney Company.

To mic Laust Sonne’s snare drum, Slot is using a combination of a DPA d:dicate™ 2011C Twin Diaphragm Cardioid microphones and DPA d:vote™ 4099 Instrument Microphones, with the former positioned above the snare and the latter below it. d:vote 4099 Instrument Microphones are also used to mike the toms, high hat and cymbals, with reinforcement provided by a DPA d:dicate 4011 Compact Cardioid Microphone positioned underneath the cymbals. 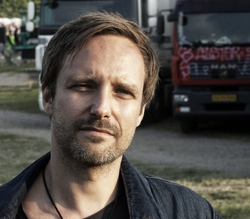 “It’s not jazz – it’s very Rock and Roll,” Slot says. “I’ve also used DPA 2011C microphones to pick up Jacob Binzer’s lead guitar. He has two cabinets that give a great combination of clean and dirty sound so I’ve positioned 2011C mics about 12cm from each of the speakers where they work brilliantly.”
Vocals are another area where DPA has come up trumps. Lead singer Jesper Binzer is using a Wisycom wireless system and Slot has equipped this with a DPA d:facto™ Vocal Microphone capsule.

“The mic helps me to stay in control without having to go primal,” Jesper Binzer says, while Slot adds: “It is a really great sounding capsule that truly grasps all the spit and energy of Jesper’s performance. Even when he sings from the side, it grabs the sound and pulls it into the mix.”

Slot adds that with a loud band like D-A-D, lead vocals need to be clearly heard in the mix and initially he thought this might not be feasible with a condenser microphone capsule.

“I didn’t need to worry because the DPA d:facto Vocal Microphone capsule is of such good quality that it is more than capable of giving me the sound I want,” he says. “I was really surprised when I tried it for the first time because, usually with condenser microphones, you get feedback issues, especially in the high frequency range. However with the d:facto this just wasn’t a problem. It does what it is supposed to do and there is very little of bleed from the rest of the band, even though the band plays insanely loud.”

Slot is also using d:facto Vocal Microphones for backing vocals, with Jacob Binzer, Stig Pedersen and Laust Sonne all singing into wired versions of the d:facto.

“These microphones are really good at isolating the vocals and they are also happy to take plenty of punishment,” he adds. “The guys do like to ‘eat’ their mics, but the d:facto Vocal Microphones cope with that brilliantly and still deliver a very punchy sound.”

See the interview with Rune Slot and clips from a D-A-D concert at www.dpamicrophones.com/livedad