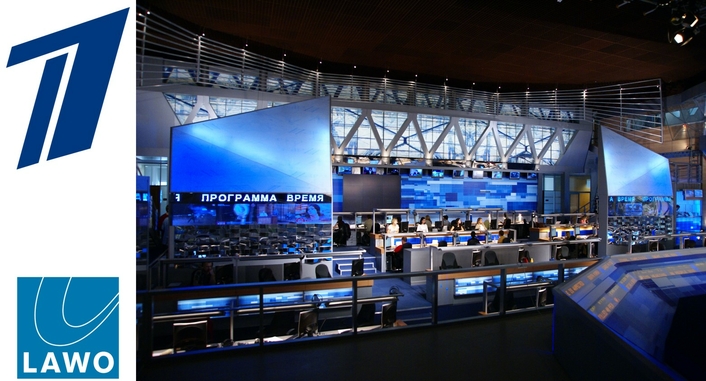 Channel One is Russia’s most popular TV channel—so popular, in fact, that it is usually assigned to channel button “1” on end-users’ remote controls. For two control rooms dedicated to its 24/7 live news service at the gigantic Television Technical Center in Moscow’s Ostankino district, Channel One installed two full-DSP-option Lawo mc²96 Grand Production Consoles with 72 channel strips and over 800 DSP channels each as well as two 12-fader, fully-featured Lawo sapphire mixing consoles for backup-purposes, along with fit-to-spec Nova 73 DSP cores and DALLIS stageboxes in an ST2022-7 redundant configuration for both the mc²96 and the sapphire consoles.

The new Lawo system handles the audio part of Channel One’s news show, “Time”, Russia’s most-watched news programs, which is manned day and night and airs live content during the whole day. Additional applications for the massively spec’d mc²96 consoles include live coverage of high-profile events like the “9 May/Victory Day”, “Immortal Regiment”, etc., parades, which last up to five hours. 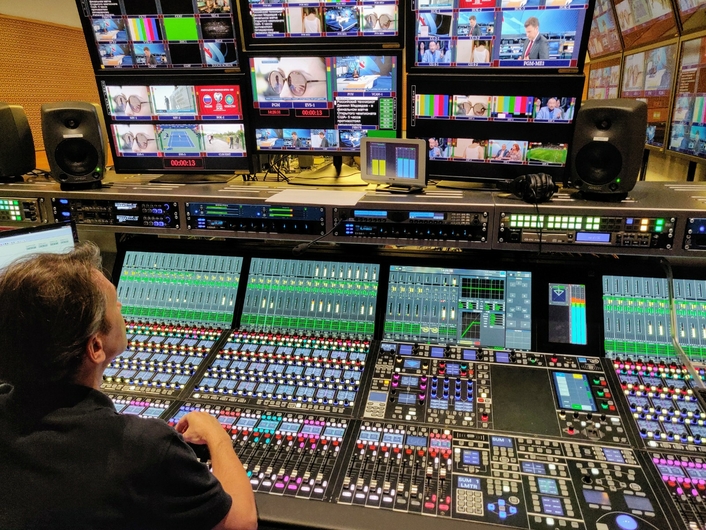 In addition, the mc²96 stands out with other user-centric features that allow it to shine in control rooms like Channel One’s, where 24/7 live operation demands maximum availability, zero failure and, of course, highly customizable, user-friendly operation. One feature deemed especially important at Channel One were the six assignable free controls per channel strip that allow operators to use the console in a near-analog fashion.

The importance of the ability to protect (lock) all required signals cannot be overstated in the fast-paced and competitive environment of 24-hour news delivery and high-profile special events. This again spoke in the mc²96’s favor.

Given the scope of the station’s operations, command triggers and several GPI/O cards were specified for convenient control of all lamps, Group Mutes and other functions.

Snapshots, Channel Isolation, the console’s intuitive layout and the ability to store backups rank among the mc²96’s additional fortes. The presence of seven Lawo V__pro8 video processing units with audio embedding/de-embedding means that Channel One is able to fully leverage the convenience of the mc²96’s LiveView™ functionality of video thumbnails for intuitive channel identification by operators even in hectic situations. Likewise, the console’s Fader Notch function was programmed to click at 0dB, allowing audio engineers to take advantage of the Fader Start function and intuitively find the 0dB setting without looking at the faders. 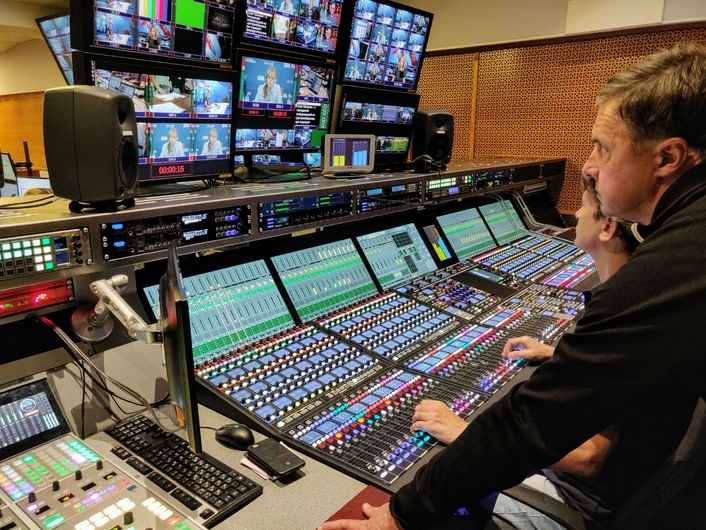 Lawo mc²96 in Studio at Channel One

Color coding of encoders and high-res color TFTs further contribute to the mc²96’s intuitive operation. Users can create, save and recall multiple personalized free control layouts directly in their own bay.

On the whole, the mc²96 is considered a Perfect Symphony of hardware & software controls, with a unique design that combines large screens with a low overbridge to provide a more ergonomic profile. Its 21.5” full HD touch-screens work hand-in-hand with the touch-sensitive color-illuminated rotary encoders. An equalizer window will automatically pop-up when touching the equalizer encoders, and after the parameters have been adjusted, the window closes without additional user action. Close positioning of the TFTs and encoders provides a constant and clear overview of parameters and graphs.

Although installed as a backup solution for the unlikely event that an mc²96 becomes unavailable, two fully-featured, 12-fader sapphire consoles have also been installed at Channel One to ensure 24/7 availability of its news program. This move again demonstrates the versatility of Lawo’s radio line-up, which is equally at home in TV operations and high-profile installations (parliaments, arenas, etc.). Other TV stations and broadcast facilities use Lawo’s sapphire and ruby surfaces as flexible remote controls for audio nodes, which is possible thanks to their open-standard IP implementation.

The sapphire mixing console offers the best of both worlds, combining cutting-edge technology with eye-catching design.

Maximum flexibility and sophisticated functionality are available on a modern, clearly laid-out control surface. The system’s raw processing power is provided by Lawo’s VisTool software which can be customized to customer specifications and offers fully-featured audio processing. VisTool is Lawo’s virtual radio studio environment that provides operators single-point access to all the tools they use daily. VisTool’s rich graphical GUI is instantly understandable, because it works the same way tablets and touchscreens do—intuitively, with control right at your fingertips. 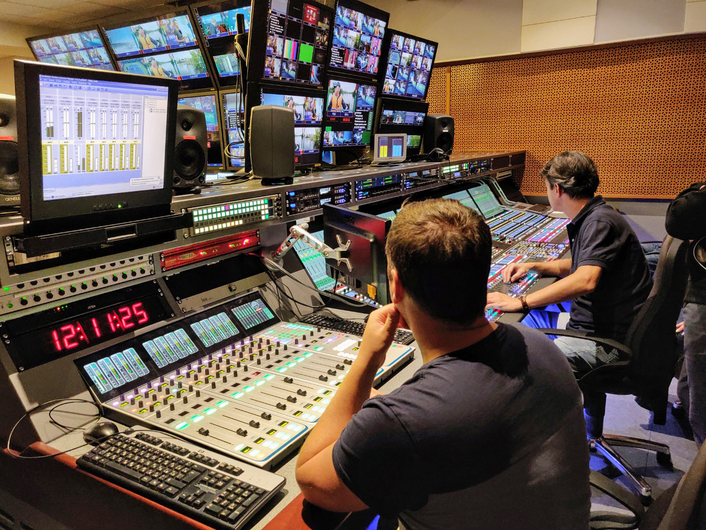 Lawo Sapphire at Channel One

Thanks to the DALLIS interfaces employed for ingesting and playing out audio signals, the audio quality of this system is on the same exceptional level as Channel One’s mc²96-based audio systems.

After the commissioning stage, Lawo provided training for the audio engineers and sound directors, with a special session given by Felix Krückels, one of the A1s at the soccer world cup 2018 (which was partly produced in immersive audio), sharing tips and tricks on how to the mc²96 in an expeditious and highly effective way. The first MCR went on air in September 2019 and second is operational since October 2019.