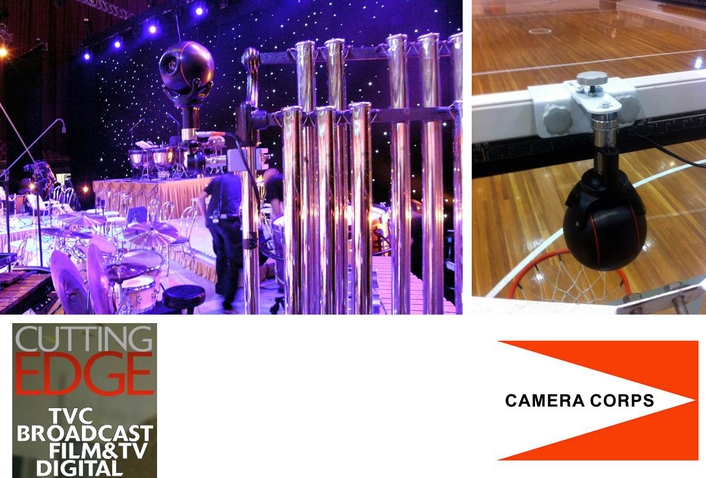 "Our relationship with Camera Corps goes back to the 2000 Sydney Olympics where it provided all of the speciality cameras," comments Cutting Edge Director of Broadcast Operation Steve Mitchell. "Camera Corps is always open to new ideas and developed systems for us that allowed new angles of coverage never seen before. That relationship continued to grow over the years and we now have the largest holding of speciality cameras in Australia.

"Q-Balls were initially chosen to replace ageing dressing room and coach cameras used for our football coverage. These proved more reliable as well as much easier to rig. The Camera Corps control system is highly robust and adaptable to any OB situation. Being simple to use and giving outstanding results, it is ideal for outside broadcasts and big-event coverage.

"We recently won a contract to provide facilities to the reality show 'The Family' for Shine Australia, currently in production. We have provided 24 Q-Balls as well as eight Camera Corps Minizooms. All 32 robotic cameras are installed in a house and controlled by one cameraman plus one video engineer. The cameras are very reliable and give very sharp pictures. Our production staff have been greatly impressed both by the image quality and by the viewing angles they can get.

"Also for Shine Australia, we used eight Q-Balls in infra-red mode for a show called 'Dating in the Dark'. We put infra-red lighting fixtures into the dark room and could see everything clearly in IR mode though the contestants had no visible light at all. 'Dating in the Dark' has completed production and is currently being aired in Australia.

"Q-Balls now are used every day as 'slam-cams' for our basketball coverage, where the tough housing and enclosed optics are real advantages, and as commentator-cams for cricket. They are also finding their way into our coverage of variety shows such as 'Australia's Got Talent' and 'Xfactor', as well as the stadium spectaculars like 'Andre Rieu'.

"We also pioneered Vest Cam, shoulder-mounting a Camera Corps' HD Minizoom on football umpires together with an HD microwave link. This enabled us to capture images and audio from within the game. These cameras are now used in many similar applications for our sports and entertainment schedule.

The smallest HD/SD pan and tilt camera system of its kind currently available, the Camera Corps Q-Ball incorporates 10:1 zoom optics and infra-red night-vision capability. It is entirely housed in a 115 mm diameter sphere machined from solid aluminium. Pan and tilt can be operated at any speed from 4 seconds to 20 minutes per revolution through an unlimited number of turns. Integral high-precision low-noise motors allow the camera to be repositioned smoothly during live shooting rather than merely between shots. The Q-Ball is fully compatible with Camera Corps' range of pan/tilt and CCU controllers. It operates from 9 to 18 V DC power. The camera heads are available pre-painted to match any required colour scheme.

Founded in 1992, Cutting Edge has established an international reputation as a high-quality broadcast origination facility and creative post-production house. Working with some of Australia's best production companies and directors, Cutting Edge pioneered the introduction of file-based digital workflow to speed the post-production process, eliminating the need to digitise multiple video and audio streams. Based in Brisbane with subsidiaries in Darwin, Melbourne, Sydney and the UK, Cutting Edge offers production and post-production solutions to suit every budget and time-frame.