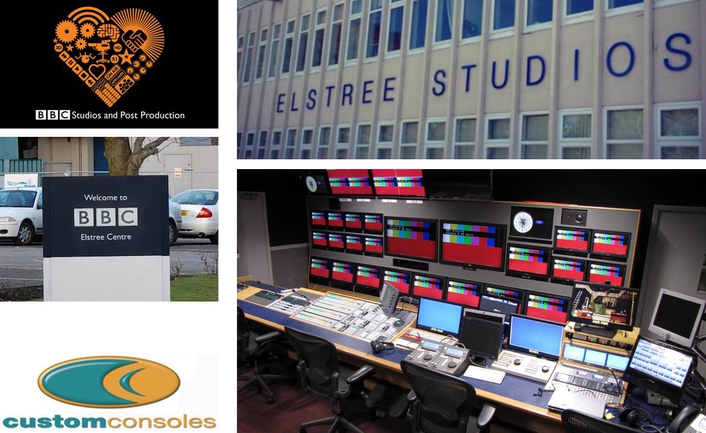 Custom Consoles desk and monitor wall in BBC Elstree Studio D production control
Custom Consoles announces the completion of a relocation and renewal project for BBC Studios and Post Production, the BBC's commercial facilities arm. Whilst the Television Centre site is being redeveloped, BBC Studios and Post Production has relocated its London studios business to Elstree and is providing HD TV studios at BBC Elstree and Elstree Film Studios in Borehamwood. The commission included moving the existing main production desk, production monitor wall and the lighting and vision monitor wall from Television Centre Studio 6 in London to the Elstree studio complex. Three additional desks have been provided, two from Custom Consoles' Module-R series plus a specifically designed lighting control desk.

The new facility is structured as two separate rooms and becomes the main technical control resource for the 11,800 square foot Elstree Studio D. A Custom Consoles monitor wall at the front of the production control room accommodates 26 video display panels of various sizes plus a studio clock and monitor loudspeaker. Facing this is the main vision control desk which is designed for use by a five-person production team. Technical facilities embedded in the desk include a production mixer, slow-motion effects controller and director-to-camera communication.

Immediately rear of the relocated front desk is a new Custom Consoles Module R desk with three computer-based workstations used in supporting production roles. Each workstation is equipped with a monitor display screen mounted on an Ergotron adjustable support arm.

Lighting and vision control are performed in a separate room. Here too the monitor wall is of Custom Consoles design and has been relocated from Television Centre Studio 6. The control desk here is designed for use by a team of three people with support from an additional colleague seated at a rear Module-R desk.

"All of the pre-installed equipment was carefully removed prior to the production desk and the two monitor walls being relocated from Television Centre to Elstree," comments Custom Consoles Sales Manager Gary Fuller. "Once at the new site, the furniture was repopulated and integrated with the rest of the production system. The relocation and new installs were all completed efficiently and on schedule."

The first show to benefit from the upgrade was ITV's The British Animal Honours, made by Whizz Kid Productions.

Elstree Studios, situated north of London in Borehamwood, Hertfordshire were opened in 1914, originally as Neptune Studios. They quickly became a cornerstone of the British film industry. Over the years many films were made at Elstree before ATV bought the facility in 1961, producing long-running television series such as The Saint, The Persuaders and The Muppets. The BBC bought the site when it became available in 1983 and the studios became the base for many of the corporation's most popular shows, including Grange Hill, Top of The Pops and Kilroy. Elstree is best known today as the home of BBC's drama programmes such as EastEnders and Holby City.

BBC Studios and Post Production is a commercial subsidiary of the BBC, providing world-class studios, post production and digital media services. It works with broadcasters and media companies, making content for BBC, ITV, Channel 4, Five and Sky, from A League of Their Own and Deal or No Deal, to EastEnders and Strictly Come Dancing. It also preserves, re-masters and manages content through its digital archiving, restoration and distribution services with credits including Life on Earth and The Sweeney.