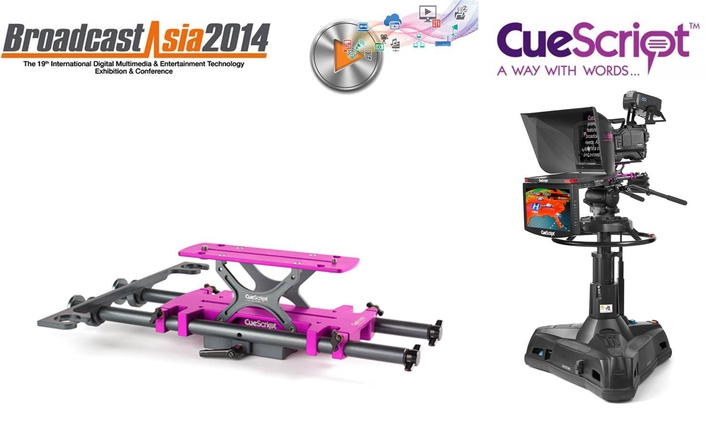 New 19-Inch LED High Brightness HD-SDI Prompter Monitor to be Displayed at the Techtel Booth
CueScript, a provider of creative prompting solutions with feature-rich designs for all broadcast production needs, is proud to showcase at this year’s BroadcastAsia show, its new CSM19 19-inch LED High Brightness HD-SDI Prompter Monitor. The CSM19, along with its designer hood and color-matched mount, will be on display at the Techtel booth (Booth 5J3-03). Techtel recently signed on to be CueScript’s distributor in the S.E. Asian region.

The CSM19 is the largest of the CueScript monitor range, but maintains a sleek design which brings together a wealth of innovative features for demanding production applications—from location to studio and is designed to meet and exceed all necessary requirements for today’s various broadcast environments.

The CSM19 was built from a blank canvas, based on the company’s depth of experience in and knowledge of the industry, as well as feedback from users in the field. By utilizing this information, CueScript has infused its CSM19 Prompter Monitor with all of the features that are necessary for modern broadcast productions, resulting in a major leap forward in prompting technology and displays.

"I have attended BroadcastAsia for many years and have always found it to be a great show on many levels,” says Brian Larter, Managing Director, CueScript. “Since the launch of CueScript at NAB this year, we have been humbled and overwhelmed by the level of interest in the products offered so far. I look forward to meeting with users, distributors and integrators, as well as the networking opportunities this show brings. BroadcastAsia offers to be a great success for CueScript, and we are delighted to be featured at the Techtel booth, as our products complement one another."

Moreover, built-in LED cue lights come standard with the CSM19, something that is often an add-on option in this product category. In addition, CueScript takes this feature to the next level and offers LED adjustable brightness and 180-degree viewing, providing the tools and applications necessary for a variety of productions from an evening newscast to a light entertainment program. Finally, the CSM19 meets the following requirements: CE, TUV, FCC, C-Tick, PSE, RoHs.

About CueScript
Launched in 2014 by industry veterans Michael Accardi, Peter Carey and Brian Larter, CueScript provides creative teleprompting hardware and software solutions, with innovative feature-rich designs for all broadcast production needs. The company’s top priority is to provide exceptional experiences to customers and users with its products and services, all of which are based on the vast industry experience of its founders and its close relationships with distributors, vendors and OEM partners. Backed by the company’s unique approach to prompting, CueScript’s top priority is to meet and exceed the expectations of its customers and users from the beginning, as they work together to build successful longstanding relationships.