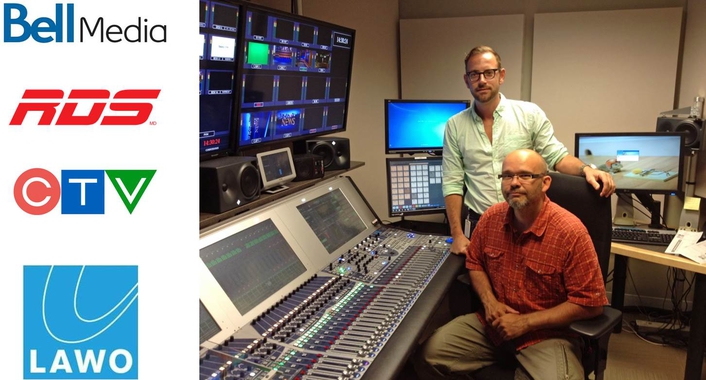 Martin Côté, Manager of Engineering Projects for Bell Media at CTV Montreal and RDS was tasked with the planning, purchasing, and deployment of equipment at the two stations. He discussed the project and the benefits it brings to the facility’s operations. “In the last 2 years,” Côté explained, “RDS upgraded all of its facilities. We introduced five new control rooms, all equipped with Lawo mc²56 consoles.  All of the surfaces were linked together using the Nova 73HD router core.”

“The idea was to be able to use any of the studios, feeds, cameras, etc. with any control room and Lawo surface,” Côté continued. “To accomplish this, we needed to bring all of our sources into a central router. We used VSM to manage all of this. The system provides users with an intuitive GUI (graphical user interface) exposing only the tools they require for any given project. We recently added this sixth mc²56 console at CTV-Montreal with the same mindset—having the ability to share resources with the rest of the infrastructure.”

As a CTV affiliate, CTV-Montreal produces daily local news while RDS is a French language sports oriented specialty TV operation. With the complete resource management integration of the six Lawo equipped control rooms, the system provides a great deal of structural redundancy and offers flexibility for special projects such as big sports events, elections, and the like. There is one redundant VSM system that services all of RDS and CTV-Montreal for XY control, Ross interfacing, studio delegation, camera tally delegation, and handling. “The combination of the Lawo consoles and Nova 73HD routers provides great flexibility and a high level of redundancy,” Côté reports.

Being that Bell Media has been deploying Lawo technology for quite some time now, Côté offered the following thoughts on those Lawo attributes he finds most appealing, “We like the great quality of the Lawo product, its expandability, its robustness, and being able to automate it thru VSM and Ross Overdrive.  RDS already had a control room with Ross Overdrive, and this most recent control room at CTV-Montreal is also operated by Ross Overdrive. Working from a central routing and control design penned by Francois Marier, the engineering team leader, our setup provides a full interface with Ross Overdrive for automated operation in the studio and the small bay allows some direct manual intervention within the production control room. We needed a system that could be easily interfaced with Ross and Lawo fit the bill nicely.”

Given the complexities of integrating a myriad of high-end audio and video technology into today’s broadcast facilities, quality customer and technical support services are a key element when it comes to conducting business in this market segment. Here, too, Côté is very enthusiastic about his dealings with Lawo. “It’s been a charm to work with Herbert Lemcke (President of Lawo North America) and field engineer Doug Smith,” he says. “The Lawo team was able to understand, design, and customize our setup to address the level of sophistication we required. Their exceptional knowledge was a key element toward achieving such a high level of integration.”

The new Lawo mc²56 console for CTV-Montreal started production of HD news on June 8th. As it joins the five RDS consoles, the combined system offers the two stations everything Côté had hoped for. “The equipment has been running stable for the last two years now,” he said. “It’s rare when you see such a big system operating with so little intervention. For all intents and purposes, this has been a ‘set it and forget it’ setup. And with everything being hot swappable, we really like how fast you can get yourself out of a jam. With Lawo’s products and know how, it’s been a very positive experience.”