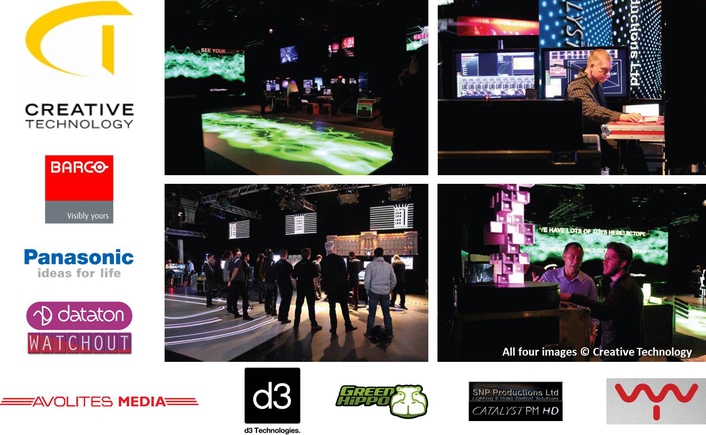 .
To get the top six media server companies in one room, showing their expertise and demonstrating their kit to its full potential in front of their counterparts could have been a logistical impossibility. However CT managed to create reality from improbability and in May opened the doors to their 2013 Open Days where visitors could find the crème de la crème of media server companies.

With each of the partner companies able to do full studio wide demonstrations utilising not only their own equipment but taking advantage of CT’s inventory of kit, the event, held at the Riverside Studios in London, was managed by CT and delivered utilising CT’s Dataton Watchout. The partners; comprising Avolites Media, SNP Productions showcasing Catalyst, d3 Technologies, Green Hippo and VYV showcasing Photon, each brought their own media servers and, in some cases, models on which to demonstrate the full capability of their kit and software.

Providing a frisson of excitement to the days proceedings, visitors to the workshop were treated to presentations by each of the partner companies. Being able to utilise any and all of the six 5 x3 Barco C5 screens positioned around the studio as well as the large 30m2 C5 display on the back wall of the studio, in addition to the 11m x 5m floor projection that utilised CT’s newest Panasonic DZ21K projectors, the studio came alive with a visual assault of images complemented by a stunning surround sound system provided and managed by Dimension Audio.

With a wide variety of clients and production companies, lighting and stage set designers visiting the Open Days over the two day period, CT were delighted with the turnout. An educational event in its basic form, visitors were leaving feeling informed, educated and most of all blown away at the power of these products and how they can transform both indoor and outdoor events.

Dave Crump, CEO Creative Technology in Europe and the Middle East commented: “Our successful formula for providing a themed showcase for new products and services has once again provided us with another great turnout of high quality customers. These open days are a fantastic opportunity to discuss both new products and up-coming projects in an informal London environment.”

Dataton WATCHOUT is a multi-display production and playback system which allows one to orchestrate stills, animations, graphics, video, sound and live feeds in a single impressive show across multiple display areas, soft-edge or scattered. WATCHOUT is fully scalable, software-based and requires no proprietary hardware.

Creative Technology
CT combines innovative thinking with a passion for technology bringing together advice, support and equipment of the highest quality. Providing everything from large screen displays to content delivery systems, CT can supply all the elements required to translate creative ideas into technical reality. 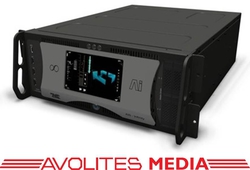 Avolites Media – Steve Warren
Ai Media Servers were born from the union between Avolites Media and Immersive, distilling 25 years of engineering design expertise and world-class show production skills. Winner of both the PLASA's "Innovation Award" and Live Design's "Projection Product of the Year Award", the Avolites Ai Media Server uses this combined experience to produce a unique "Production based Workflow" offering the exact tools and features at the time they are needed for faster delivery of even the most complex shows. Full 3D project visualisation, "Salvation", an easily reconfigurable Node Based Engine and the industry leading 24 bit "Aim" Codec make the Ai server a clear choice for any video, projection or LED mapping project. Ai servers also incorporate elegant multi-Timelines, extended industry standard DMX/Artnet control as well as live video playback "Busking". Avolites Media were proudly demonstrating dynamic and rotational mapping, New V7 features such as AutoMap and showcasing their past projects, including the record breaking control of 70,500 mini screens at the London Olympics, the live projection mapping onto 48 moving columns for Bon Jovi and the LED mapping for Sky 1's Got to Dance.

d3 Technologies – Chris Bird
d3 is more than just a media server. Based around a real-time 3D stage simulator, d3 is the single solution needed to design, present, communicate, sequence and playback your show. It lets you work with props, venues, LED screens, projection, lighting and moving stage elements, while being completely integrated into a single piece of intuitive software that runs on your own laptop or dedicated d3 hardware. Having been in development for over 10 years, d3 is the world’s first integrated video production suite. d3 has been a crucial part of some of the world’s most high-profile and complex shows, including Madonna’s MDNA tour, the Queen’s Diamond Jubilee, and the U2 Vertigo and 360 tours. d3’s applications range from theatres to broadcast, from architectural installations to concerts and from sporting to projection events worldwide. At the Media Server Workshop d3 Technologies showcased their new software release d3 R11 that can help simplify and drastically reduce projector set-up times with the new QuickCal and MultiUser features.

Green Hippo – Sean Westgate
Green Hippo has been at the forefront of media server development for over a decade, dealing with the challenges of live events and installations. With 12 years of experience in developing and supporting this new genre in video, Green Hippo are focussed on ensuring shows run day in day out, on tour, on Broadway, on your TV or on your event. Available in several variants to fit any size event or budget, the key features of the award winning software are retained across the entire product range allowing limitless interconnectivity and scaling. Green Hippo will be showing the latest software version 3.2 and key features will include; the new RegionMapper component, providing the ability to map video onto 3D architecture and models without the need for a 3D model; VideoMapper, which allows remapping of any content onto LED walls, while being able to put them into any creative configuration; the Mackie Programming Console, for those who don’t use a lighting console and still want to be able to achieve the same programming speed on time critical shows; Pre-visualisation, showing Hippotizer’s ability to integrate into most industry standard show visualisers; and UberPan, enabling the user to create super-high-res canvases across many servers with automatic media upload, content splitting and distribution.

Catalyst – Simon Pugsley
SNP Productions Ltd is the UK dealer for Catalyst Media Server providing Hire, Sales, Training and Support for lighting and video control solutions around the world. SNP Productions Ltd was set up by Simon Pugsley in July 1999. Since incorporation the company has supported and provided Lighting and Video control solutions for numerous productions in all fields of the entertainment industry. SNP Productions Ltd specialise in custom control solutions for video projects, providing trained operators, top quality modern equipment and years of knowledge and experience in all aspects of production work. Catalyst was the first DMX controlled media server on the market. Originally launched at LDI in 2000, Catalyst revolutionised the way in which Lighting Designers were able to control media playback and make live adjustments to the imagery. Catalyst has a hugely flexible media playback and show control system, making it an ideal product for Concert Touring, Television, Installation, Theatre, Opera, and almost any live event. Catalyst is a Mac-based media server. Not only does this offer great performance, but it benefits from operating on standard Apple Mac hardware available worldwide. The software creator Richard Bleasdale continuously develops, improves and adds new innovative features to Catalyst software. Catalyst provides clients with a reliable and flexible video show control solution.

VYV – Eric Plante
VYV was created in 2004 by Emric Epstein, M.Sc. Computer Graphics, Martin Granger-Piché, M.Sc. Computer Graphics, and Pierre Poulin, Ph.D. Computer Graphics and University Professor, and its products have since been used in a large number of projects, such as Cirque du Soleil’s “Michael Jackson One” (2013), “IRIS” (2011) and “Zarkana” (2011), Franco Dragone’s “Story of a Fort, Legacy of a Nation” (2013) and “The House of the Dancing Water” (2010), as well as Justin Timberlake’s Future Sex Love 2007 World Tour, Alicia Keys’ As I Am 2008 World Tour, Britney Spears’ Circus 2009 World Tour and Robert Lepage’s Dragon Bleu Theater Tour 2008-2013. Over the years, VYV's team has delivered reliable, adapted and innovative solutions to the challenging requirements of multi-video projections for live shows. Photon has evolved into VYV's star product, and its integrated hardware/software solution has continually redefined what is possible in large-scale situations, while maintaining its careful design.

CT Brings Jubilee Celebra... to the Streets of London
ESC 2012 - with a Spectac...stallation Supplied by CT
CT Provides Vision to The Voice