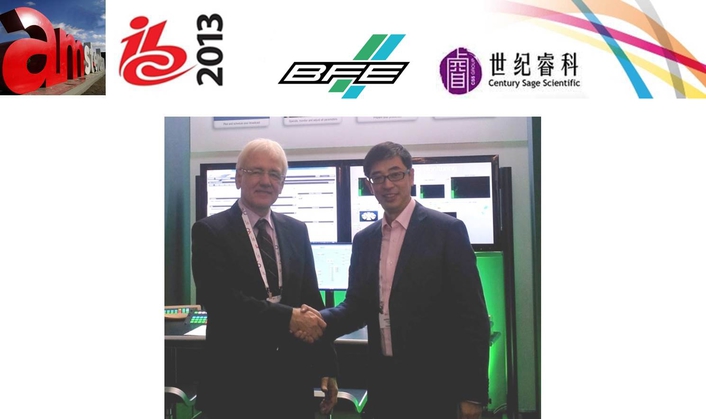 Founded in 1971 and based in Germany, BFE has developed the industry standard for Broadcast Control Systems, the KSC System. Following the agreement with CSS, BFE will increase their presence in the region benefitting from an excellent reputation through various projects.
At BIRTV 2013 a sophisticated demo system was shown to a highly interested audience from broadcast stations all over China. Sebastian Schaffrath, Head of KSC Service, worked successfully with CSS’s motivated and highly skilled engineers to demonstrate KSC’s full control of the equipment at the CSS booth.

‘CSS Group has a renowned reputation in all over Asia and can point to an envious catalogue of references. The technical capabilities of the CSS engineers are highly acclaimed in Asia and also recognized throughout Europe. We are looking forward to a fruitful cooperation.’ stated Horst Ernerth, CEO of BFE.

With several requests for KSC systems from CSS customers all over China, first systems will soon be deployed in studios, OB vans, master control rooms and playout centers.
Andrew Lo, President of CSS Group was extremely satisfied with the response to the KSC system acceptance.

‘It is an honor to cooperate with BFE in the region. BFE is a great company of international fame in the industry and has the exciting technology. KSC product line can definitely benefit our customers and we can see that it has great opportunities here in the region.’

BFE Studio und Medien Systeme GmbH is a manufacturer-independent broadcast systems integrator with more than 40 years of experience in the planning and implementation of complex projects in broadcast and media technology. As a competent and reliable partner, it supports customers in Europe, Asia, North Africa and the Middle East, implementing system solutions tailored to their specific requirements. As manufacturer of its own KSC product line, BFE also markets control and management solutions for the professional television and radio industry. BFE’s branch office in Dubai Studio City supports activities in the GCC region.