Cape Town South Africa based CS Audio, a busy full technical – sound, lighting, video and structures - solutions and rental operation started in 1995 by Donald Clark, became the third company in South Africa to invest in Robe BMFLs, with the purchase of 12 x BMFL Blades together with 24 of the new DL4S LED Profiles.

These are added to around 150 other Robe moving lights in current rental stock, confirming that Donald is a big of a fan of the brand!

Donald is certain the BMFL is a game-changer in terms of brightness and features, a versatile all-in-one luminaire with a long shelf-life he states, adding that the “awesome” framing shutter module was also important, as theatrical detail and finesse is very characteristic of the style and oeuvre of CS’s own lighting design projects.

Another reason was quite simply demand. LDs with whom they regularly work were requesting them, so “it was time to make the decision”.

As far as the DL4Ss were concerned, he’s been waiting for some time for a really bright high quality LED lightsource that could out-shine the 700 series units … and he’s also extremely happy with these.

The BMFL Blades and DL4Ss were delivered after the 2015 Mediatech expo in Johannesburg by Robe’s South African distributor, DWR.

Both types of new fixtures went straight out on a tour with Australian originated Christian rock band Newsboys, for which CS supplied lighting, sound and video for three shows via production manager Wayne Krull of Phoenix 5, also based in Cape Town who co-ordinated the technical production elements of this short SA tour.

The band played Cape Town, Johannesburg and Pretoria over a four day period, with each show effectively run as three different but similarly set-up rigs, each utilizing around 40 lights.

After watching as much live performance content of the band as they could on the internet and agreeing to a lighting package from CS that fitted into the budget, Wayne asked Alan Muller to design a lighting scheme and join the tour specifically to adapt that design to each venue, all the time maintaining the requirements of the band’s LD Matthew Brewer.

It was Wayne’s idea to use the BMFL Blades for this.

Two were used as follow spots, an approach that “worked a treat” in terms of matching the colour temperature and light quality with the other lighting elements which was nearly all Robe, including LEDWash 300s and 600s and LEDBeam 100s.

Since then the BMFL Blades have been out on a wide selection of corporates, and there are many more shows coming up as the SA summer event season starts ramping up. 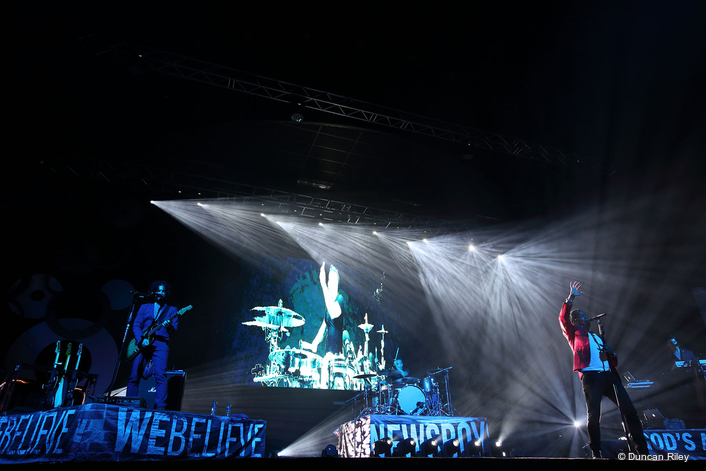 Donald feels that the Robe brand is extremely strong right now, as well as synonymous with innovation and “keeping ahead of the competition”.

He thinks the BMFL is definitely a market leader and continues to be impressed with the “incredible” service from DWR, another deciding factor in making his choice of brand investment.