Creating a Voice for Underrepresented Communities 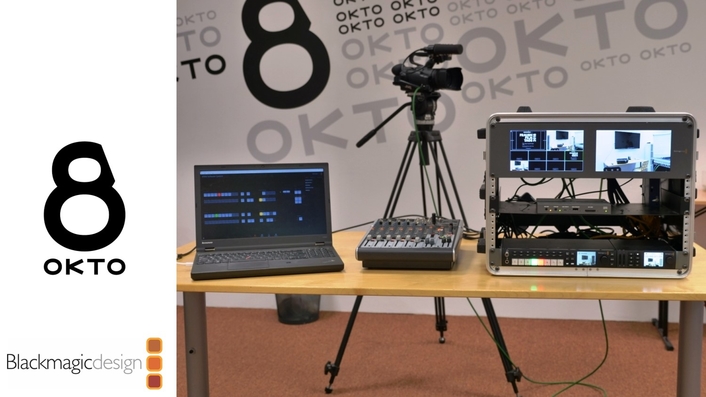 Since 2005, Austrian community television channel, Okto TV, has helped a wide, varied range of groups to create exciting and engaging programming to bring their ideas, interests and insights to new audiences across the country

Funded by the city of Vienna and Austria’s regulatory broadcast authority, RTR GmbH, Okto TV is a not for profit television channel that not only offers studio and production facilities for community projects, but its 20 strong team also trains and delivers hands-on advice for these passionate amateurs, with the goal of making them self sufficient production teams in the long run. “All of these groups are made up of volunteers and so we rent them all of the equipment they need, from microphones to lights and give them full access to facilities such as editing and voiceover suites; essentially everything they might need to make a broadcast quality production,” explains Richard Treiblmaier, Okto.tv.

In particular, Okto aims to offer a platform to communities, issues and opinions that are often neglected and underrepresented in the mainstream media. The studio’s output includes Latino TV, presented by Austria’ Latin-American community, 12 Minutes Live: studio performances from indie musicians, Mulatschlag, a rock music magazine show, and Oktoshop, which showcases independent filmmakers and their projects. All of the studio’s live and recorded content is broadcast across the Vienna, Lower Austria and Styria regions via cable TV, as well as streamed via Okto’s website. 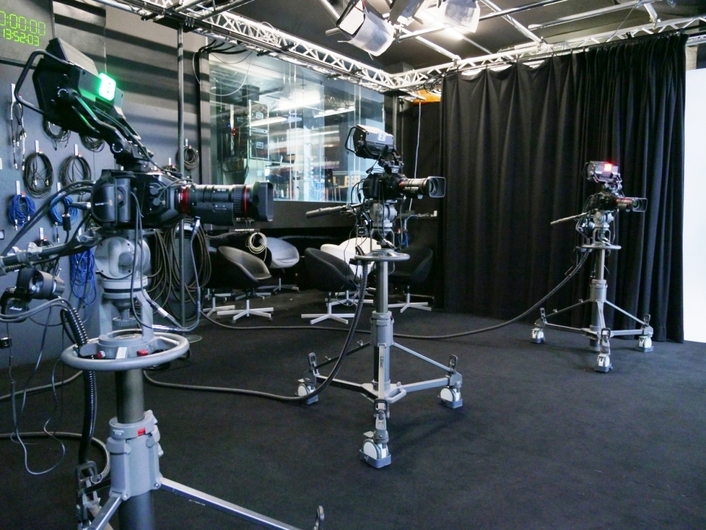 When the time came to upgrade its standard definition infrastructure, the Okto team had to design a studio facility that was adaptable to the creative needs of its customers, ensuring their requirements were firmly front and centre. “We had reached our limit with the existing infrastructure; it was dated, analog with no digital signal routing and was becoming increasingly inflexible,” Richard continues. “Fulfilling all of our groups’ creative needs was just taking too much time, and more often than not, it simply wasn’t possible.”

Increasingly, as its clients grow in confidence, the team is also seeing requests for live streaming, live graphics manipulation and external media playback. “We knew that flexibility and high production values had to be top of our wish list,” he continues. 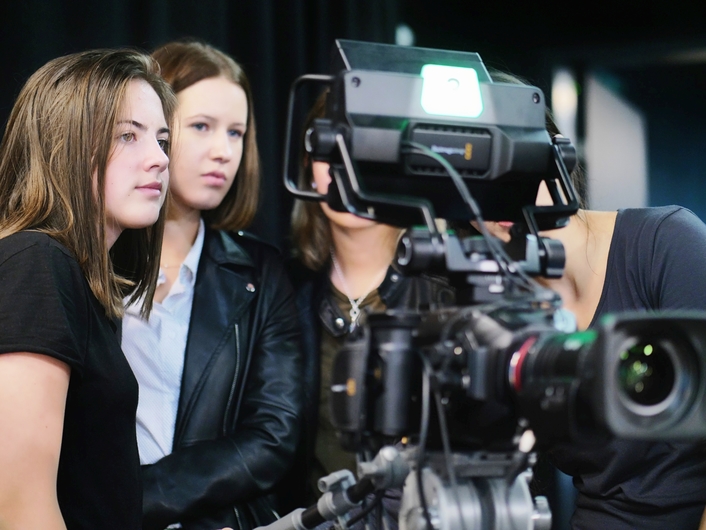 The majority of the studio is wired based on short 6G-SDI runs, with fiber running out to the team’s playout servers, which are located on a different floor. The complete studio infrastructure is underpinned with a Smart Videohub 40x40, which handles signal distribution. “The digital routing that the Smart Videohub provides is a major step up from our previous system, and its controls are the main reason that I chose to go with a Blackmagic infrastructure,” continues Richard.

Content is recorded on a HyperDeck Studio 12G broadcast deck, and Okto has also invested in monitoring infrastructure, including the Blackmagic Audio Monitor, SmartView 4K and SmartScope Duo to ensure customers can review and monitor their program output. 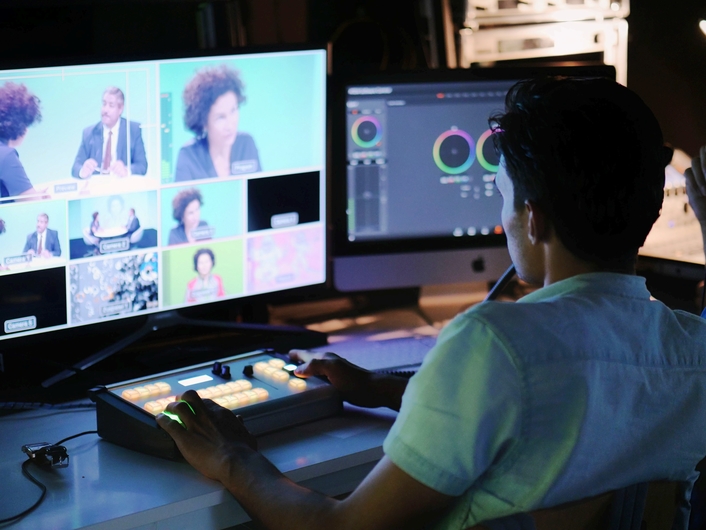 Richard explains that Okto opted to implement camera chains based on the URSA Mini 4.6K, paired with the URSA Studio Viewfinder, Canon lenses and pedestal mounts, for studio acquisition. “Not only are the images from the camera superb, thanks to its dynamic range, but the menu system is clear and simple to navigate. Our groups have quickly got to grips with how the camera handles and the output they’re producing looks fantastic.” As well as the Blackmagic cameras, the studio also has the capacity to add in a range of DSLR, DSLM, prosumer and consumer cameras, which the groups are starting to purchase for themselves to produce additional content. 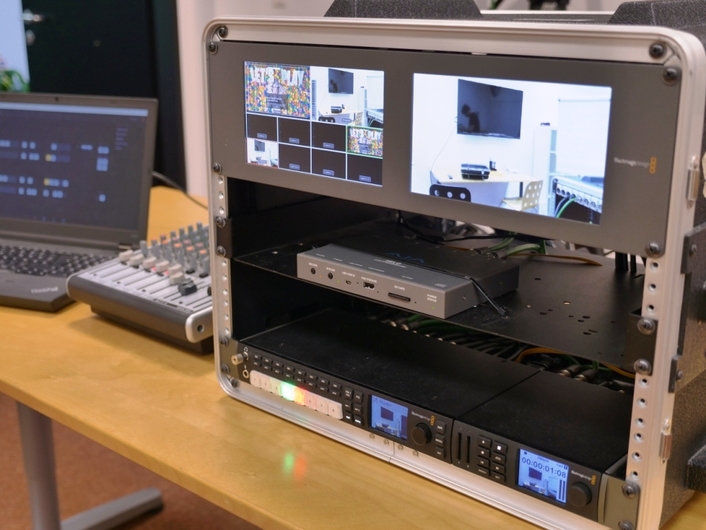 Feeds from all of the cameras are taken into an ATEM 1 M/E Production Studio 4K, where the program mix is produced. “We decided on working in an HD format as it matches many of our broadcasters’ requirements, so that we never have to up convert our signals for delivery,” Richard explains. “We add graphics in post for our pre-recorded programming, but for all of our live productions we handle graphics coming from Photoshop for static images or Motion for animation directly in the switcher. Again, our volunteers have found the ATEM to be intuitive and makes the program mix a very immersive and interactive experience.” Playout is controlled by two redundant Macs with DeckLink capture cards and OnTheAirVideo Software, which controls live playback for Okto’s regular television broadcasts. 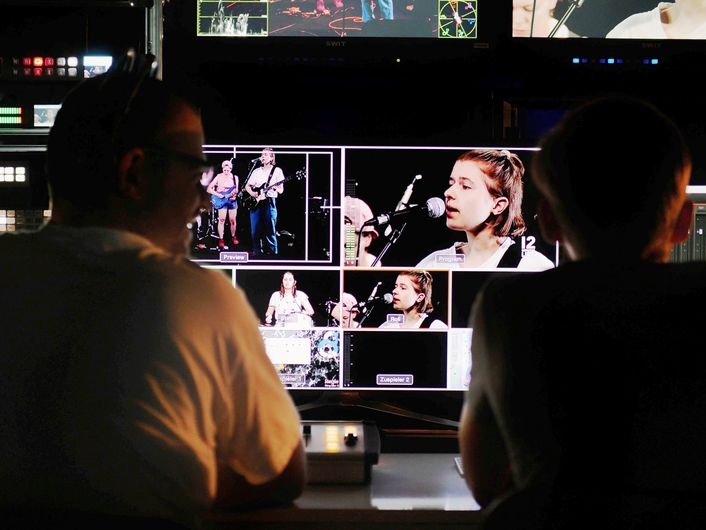 As well as continuing to provide facilities and training from its main studio base, Okto TV is also going mobile, with a portable version of Okto’s studio system, which allows the team to deliver live multicam productions and editing services for customers’ events around the country. “We’ve put together a compact flight case, built around the ATEM Television Studio HD, which gives us the latitude we need for an effective outside broadcast within a small form factor. Eventually, we’ll look to incorporate the URSA Mini cameras from our studio location, as they can easily slot into an OB environment when shoulder mounted, and this versatility means that we can expand our ranges of services and help our customers develop.”