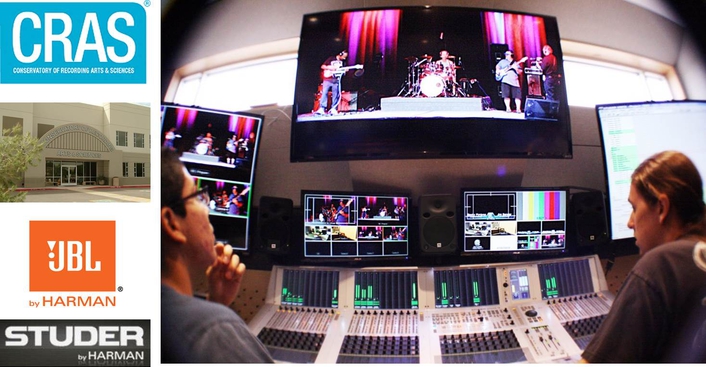 The Broadcast Audio segment focuses on the opportunities and workflows and technologies that are specific to live television broadcast. Students will work out of the CRAS Broadcast audio production room as well as the CRAS mobile production trailer and work hands-on with the Studer broadcast audio mixing consoles. “Our program has always required students to study onsite for 30 weeks and then go on a mandatory internship, but we expanded that to six more weeks in our program and that includes the new Broadcast Audio phase,” said Robert Brock, Digital Department Director at CRAS. “We want our students to understand the requirements of working in broadcast production—being able to focus while working under a director and handling the pressure that comes with live broadcast.”

Brock noted a need at the educational level to raise awareness of opportunities in the broadcast industry. “The problem is a lot of people haven’t had the exposure to audio for broadcast, so there’s kind of a feeling within the broadcast industry that there isn’t a passion for audio,” Brock said. “We want to make our students aware of the numerous opportunities that exist for audio engineers in broadcast.”

While in the development stages of the Broadcast Audio segment, CRAS found an ideal partner in Studer. “We never want to do anything halfway when it comes to technology, because we want to serve the students but also want to show the industry how committed we are. A lot of manufacturers offer educational discounts and that’s fine, but we really wanted an educational partner and something that was mutually beneficial to the manufacturer and to our students. And this is where Studer really stepped up, they really understood that we wanted a partner that had some vision of their own.”

This vision led to the creation of StuderBroadcastAcademy.com, developed in partnership between Studer and CRAS. The training program is available to professional engineers but also provides the basis of the curriculum at CRAS. Students can operate a Vista 9 console in the audio production room, a Vista 5 in the mobile broadcast unit, or get training online at StuderBroadcastAcademy.com using the Studer Virtual Vista software.

“When you sit behind the Vista 9 or the 5, the user interface with Vistonics™ displays makes it really intuitive once you have it set up and configured,” Brock added. “It’s very easy to take a student who knows very little about consoles and explain just a few things and they can navigate the system, which isn’t true of all consoles out there.”

In addition, CRAS outfitted its studios with two 5.1 surround sound systems consisting of JBL LSR6325 studio monitors with LSR6312S studio monitor subwoofers. “I was at JBL’s headquarters in Northridge, California and [JBL Professional’s Senior Manager, Recording & Broadcast] Peter Chaikin showed us the LSR6325 monitors and we really liked them,” Brock noted. “They were the right form factor and sound really great. What I really like is as a system when coupled with the sub, they sound better than anything else out there. As a singular system, it jibes together really well.”

CRAS worked closely with veteran audio engineer Fred Aldous and other professionals to help CRAS devise the approach of the Broadcast Audio segment. “Fred has been working with our instructors once a week to get them up to speed on everything, and in the meantime we’ve reached out to NASCAR, the NFL and other organizations to get connected with some A1 engineers in the field. We’re really trying to connect closely with the industry,” Brock said.