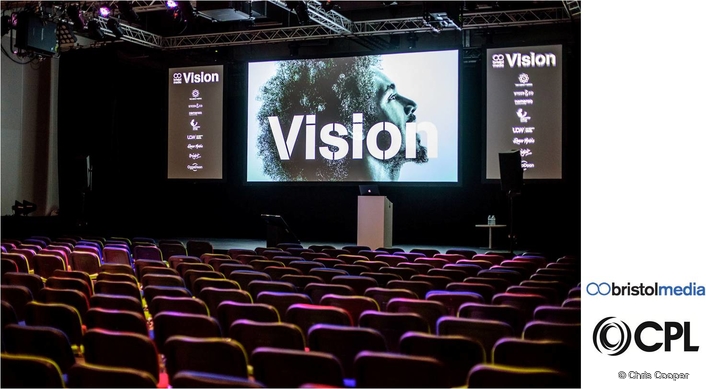 CPL, working for event producers Bright, supplied lighting, sound and video equipment and a number of creative and practical technical solutions for Bristol Vision 2017, an inspirational and networking event staged at the Anson Rooms, Bristol University, organised by Bristol Media for individuals and companies engaged in media and communications sectors.

Mike Radford project managed for CPL, working with a crew of four and closely with Bright’s production manager Fleur Saynor. They covered several different areas including a main plenary space, associated breakout rooms in the Pegg Theatre and AR Bar, reception / check-in and a café / open / meeting space complete with a number of exhibition display booths.

It was a busy day for the 200 delegates who could catch 18 keynote speakers and engage a diversity of other digital and media related commercial and business activities.

Communication was of the essence, the mood was stylish and slick, the expectations for quality and streamlined presentation were high, and everyone on the production side put a lot of energy into ensuring a busy, fast-paced event with much to be absorbed … it was a lively, animated and enjoyable environment. 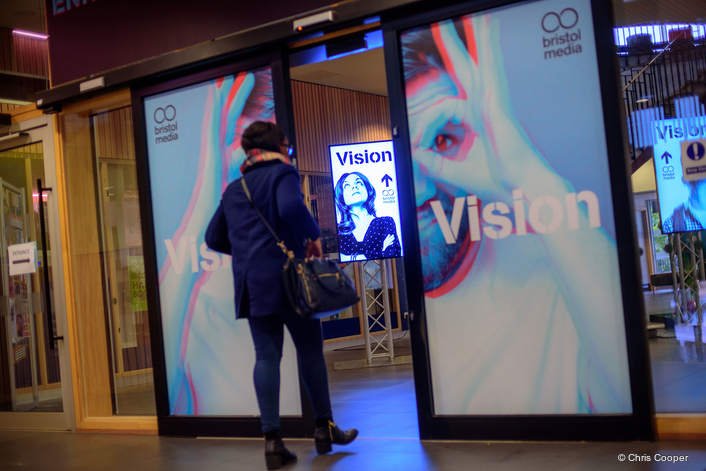 In the main plenary room CPL rigged a central 16 ft. by 9 ft. screen at the back of the stage which was flown on the house trussing, and either side of that was a pair of 8 ft. 9 inch by 4 ft. 11 inch portrait format projection screens. These two portrait screens made use of Rigtec’s handy portrait flying frames and single point truss adaptors.

Screen content was delivered from a range of Dell and MacBook laptops provided as part of the production brief, with many speakers also providing their own machines which had to be hooked into the system.

All of the sources were fed through one of CPL’s Barco S3 processors running Event Manager software which was the central hub for all inputs which were then routed to multiple destinations. To ensure that all the stage presentations could be seamlessly integrated into the system, a Barco ImagePRO-II scaler / switcher was also utilized enabling different sources to be quickly switched at the lectern. A 46 inch Samsung was provided as a preview monitor for the speakers. 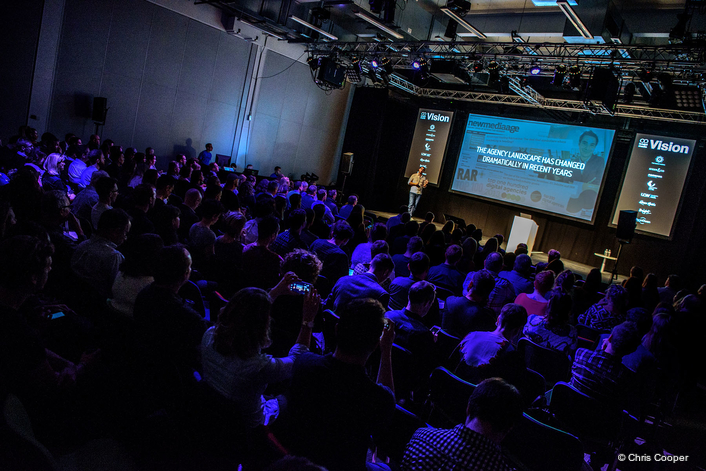 A d&b Y7P point source audio system was installed comprising four speakers and two V-SUBS, the latter positioned at the back of the stage behind the draped wall, all driven by d&b D20 amps with a Yamaha QL1 for control. A mix of Shure UR1 lapel and UR2 hand-held radio mics were supplied for speaker reinforcement.
For lighting, the house fixtures were used.

The two breakout rooms in the Pegg Theatre and the AR Bar were each kitted out with a projection system including a Panasonic EZ 770 projector mounted on a Rigtec single point truss adaptor, clamped to a house truss, feeding an 8ft 9 inch by 4 ft 11 inch screen.
There was an HDMI / VGA feed from the lecterns and a basic d&b E8 audio system powered by D20 amps with Allen & Heath Qu-16 mixer plus a selection of Sennheiser G3 tie-clip and hand-held mics.

The brief was to ensure that each area looked simple and uncomplicated but high quality when it came to technology, so clear, crisp projections were a key and each of the breakout areas was diligently draped and dressed in black.
At the end of the daytime sessions, the AR 2 Bar was transformed into the afterparty area, so CPL had an hour to turn it into a funky dinner environment with a DJ set up. 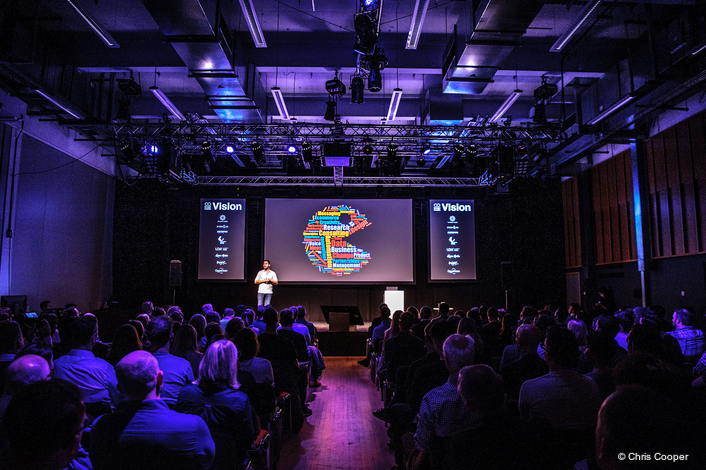 They stripped out the E8s and installed the more powerful Y7P speakers complete with v-subs and kitted out the DJ booth with a Pioneer DJM 800 mixer and CDJ2000 decks.
CORE ColourPoint2 wireless battery powered LED uplighters were deployed around the room grazing up the walls of the room, adding colour and vibrancy. These extremely handy fixtures are a new investment for CPL, and four Claypaky Mythos moving lights were installed on draped flightcases around the room to add more colour, movement and aerial effects.

In the foyer, the organisers wanted some lively and fun ways of engaging delegates on arrival, so CPL specified a 2.5 by 1.5 LED screen built from their 3.47 mm Roe Black Onyx product which was mounted on a 1mtr plinth.
The name of every delegate / company was on a backdrop image, delivered to CPL’s control centre via a web feed from Bristol Media directly into their Brompton Tessera processors. As each delegate registered, the web page auto-refreshed and that delegate’s name would be illuminated on the screen indicating they had arrived.

Also in that area, Bristol Media created video idents and digital signage with information feeds relating to each of the discussion areas, so CPL created a series of 2 metre high truss plinths with LED screen attached via Rigtec portrait screen adaptors and back plates. 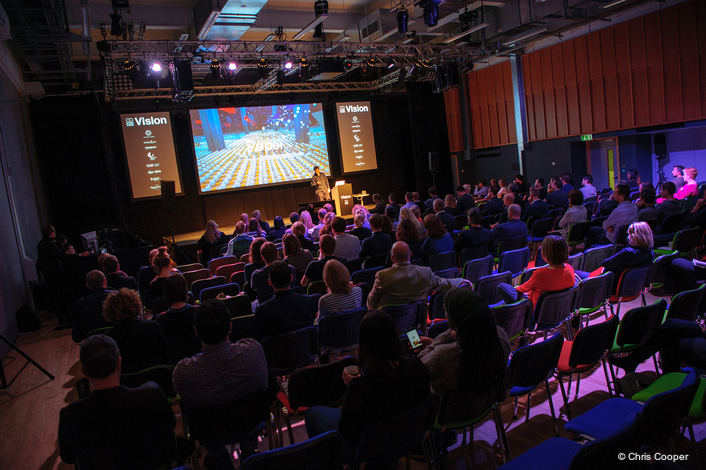 These were distributed around the foyer, stairwell and outside each of the meeting rooms, showing the sessions in progress and upcoming.
“They looked streamlined and high tech as well as being informative and easy to read” commented Mike, “so they ticked all the boxes in the brief”.

In the cafe area, CPL’s task was to facilitate an interactive display surface for live Twitter, Instagram and other social media feeds related to the event … so Mike designed and installed a 4 sided video cube, each screen face comprised a 2.5m x 1.5m LED video wall also built from the Roe Black Onyx 3.4 mm LED flown from a trussing grid.

Once again Bristol Media provided content via a web page with four separate outputs on which they highlighted tweets, Instagram posts and now / next slides, fed to CPL’s control hub for outputting to the LED cube. 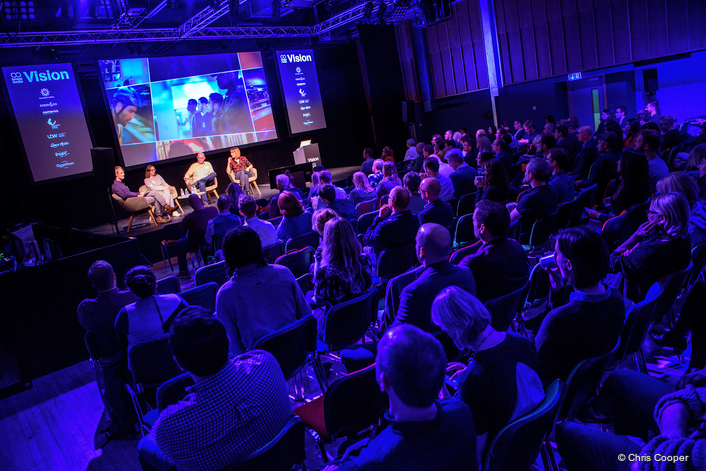 “The whole presentation was extremely polished and well thought out” says Mike, “We all spent a lot of time on screen resolutions and how the content would work across all screens and spaces. Bristol Vision created bespoke web pages, moving background images and cool branding videos to the exact screen pixel specifications all of which took a lot of co-ordination, but it really paid off in terms of the end results. It was a great event with which to be involved”.