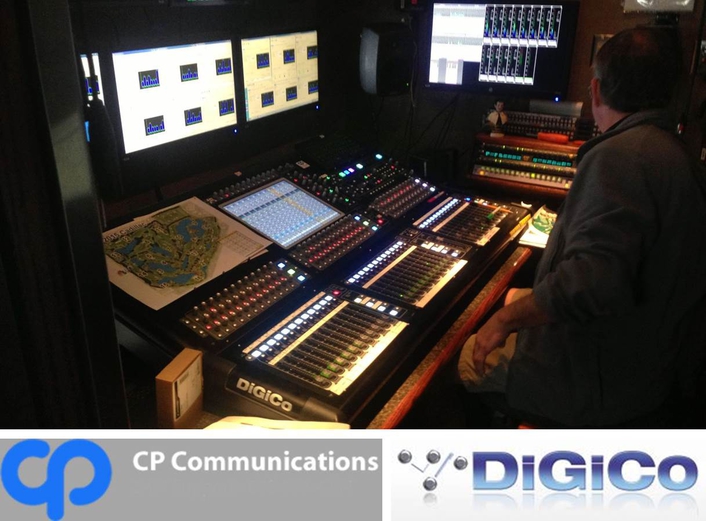 One of six new DiGiCo SD10B digital mixing consoles found in CP Communications’ new HD mobile production vehicles
Over the past three decades, Elmsford, NY-based CP Communications has supplied audio and video communications solutions for many of the world’s largest broadcasters, including CBS, ESPN, FOX Sports, NBC Sports Group, Turner Sports and Univision. Boasting a full fleet of HD RF mobile production vehicles capable of handling even the most demanding sports and entertainment events, CP continues to raise the technology bar for its clients with the recent addition of no less than six DiGiCo SD10B digital mixing consoles.

Flypacks are a key element in CP’s offerings, and the sixth SD10B-24 will be used primarily for that purpose, although Heitmann points out that all of the new SD10Bs can convert to flypack mode if needed. “The DiGiCos in flypack mode will typically be used as routing desks into a MADI network and for submixing effects,” he says. “They will also be used as submixers for studio sets, feeding to the main production mixer.”

CP’s trucks handle a wide range of duties for everything from the NYC Marathon to PGA Golf Tours and MLB All-Star Games. On major sports events, one typical use is as an ESU, ingesting audio feeds from wireless mics and various other sources and routing them to other units via MADI, while simultaneously providing audio quality control. CP’s SD10Bs with their integrated routing and MADI capabilities are perfectly suited for this. Providing a submix feed from sets at sporting events is another common application. Recent projects have included MLB and golf broadcasts for Fox, NBC and the Golf Channel.

When asked why CP standardized to DiGiCo, Heitmann says, “Cost-effectiveness was key, as well as reliability. Thanks to DiGiCo’s legacy as a robust touring console, we fully expect them to survive the bounces of life in a truck.”

Other primary considerations for Heitmann included the SD10B’s DSP processing power and fader count, as well as the console’s relatively compact footprint. Equally important was DiGiCo’s ability to work within CP’s tight delivery requirements. Furthermore, Heitmann pointed to DiGiCo’s new family connection to Calrec and the enhanced connectivity options that will soon be available between the two brands.

CP’s SVP added that first-time users have “picked the consoles up really quickly” and that “engineers love them because they’re very intuitive and easy to use; plus the MADI distribution is key,” he adds, again noting that the SD10Bs talk to the Calrec consoles in the broadcast trucks.

Lastly, Heitmann lauded the support that he has received from DiGiCo’s US distributor, Group One Limited. “The training and customer service have been second to none,” he enthuses. “We couldn’t ask for anything more—it’s been fantastic—and these consoles are already proving to be a great benefit to our clients.”

Headquartered in Elmsford with a mobile fleet field shop up in Fishkill, CP Communications also has satellite offices in Orlando, FL and Portland, OR. The company additionally has partnerships in countries around the world, including Australia, Brazil, Canada, Germany and the UK.

About DiGiCo
DiGiCo is a UK-based manufacturer of some of the world’s most popular, successful and groundbreaking digital mixing consoles for the live, theatre, broadcast and post production industries and is exclusively distributed in the US by Group One Ltd. of Farmingdale, New York.