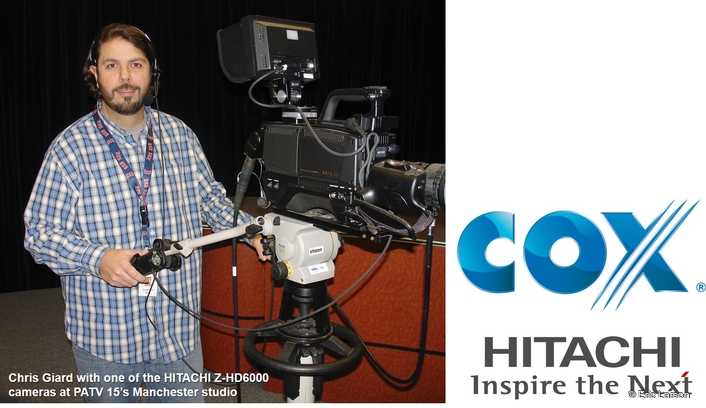 PATV 15 operates distinct public access channels in each of its three designated franchise areas, with studios in Manchester, Enfield and Cheshire. PATV 15 production technicians train public users ranging from recent graduates to senior citizens on the techniques and equipment they need to create their own shows, which then air on the channel. The Enfield franchise also provides a dedicated government access channel for many of its area’s towns.

Since purchasing their first three HITACHI Z-HD5000 cameras for the Manchester facility in 2012, PATV 15 had added three Z-HD5000s in Cheshire and four more in Enfield. With an HD-capable mobile vehicle on its way to replace its existing truck, they took the opportunity to update their Manchester studio while shifting those cameras to the field.

“We knew that we would be getting the new production truck, and while the SD cameras from our old vehicle had served us well, we wanted to roll it out in HD,” said Chris Giard, video engineer for Connecticut Public Affairs, Cox Northeast Region. “We like to get ten years of service out of our equipment investments, and with the truck getting less use than the studios, it made sense to move our first Z-HD5000s over. We wanted HITACHI Z-HD6000s for our studio ever since we saw their phenomenal image quality at the NAB Show, so everything fell perfectly into place.”

Supplied in September by systems integrator HB Communications, the Z-HD6000s have delivered the exceptional picture quality that PATV 15 expected even under challenging lighting. “The signal-to-noise ratio is impeccable,” explained Giard. “We like to have our studio lit fairly low compared to many other studios, and the outstanding sensitivity of the cameras allows us to do so without bumping the gain up.”

Cost-effectiveness is a key consideration in any public access environment, and the HITACHI cameras have helped PATV 15 achieve its high quality standards while staying within its budget. “When you compare studio-configured cameras, the HITACHI units aren’t the cheapest, but you get the most bang for your buck,” praised Giard. “Because we have made so many upgrades in other areas of our business, we have been able to focus more capital investment onto our studio cameras, as we see the vital role they play in the overall customer experience and their impact on the on-air result.”

PATV 15’s overarching goal is to provide the best public access experience possible for its community, and the HITACHI cameras have been a key part of that success. “Our users have come to expect a high quality of image output from our studio productions,” summarized Giard. “Producers have told us that what comes out of our studios looks amazing compared to other facilities. That right there tells me the investment was worth it, because our customers are seeing the value in the money we spent.”