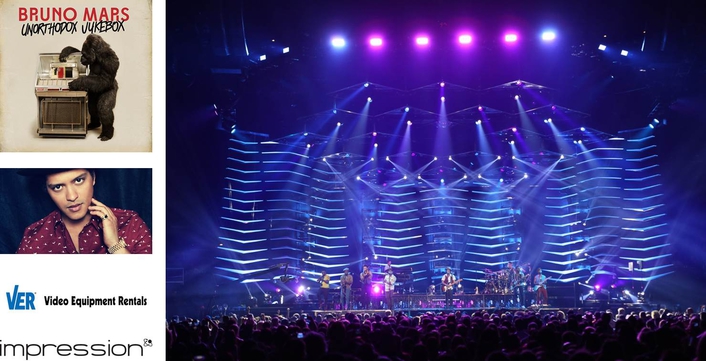 27 GLP moving heads on Unorthodox Jukebox tour
Described by Rolling Stone magazine as among the greatest live acts presently touring, Bruno Mars has been out on the road supporting his platinum Unorthodox Jukebox album — which officially became the fastest selling album by a recording artist in 2012.

His production design team once again on this arena tour is Cory FitzGerald and LeRoy Bennett, who have worked with the artist since the 2011 Hooligans in Wondaland tour.

Stepping up to larger arenas this time around, production has upscaled accordingly, and Cory has again turned to GLP’s impression LED moving heads. Having had wide experience over a number of years, this time he has built 27 of the popular impression X4’s, supplied by VER of Glendale, into a retro-style set redolent of the '70s & ‘80s, including a 6ft mirror ball.

The designer has worked through several generations of GLP’s premier LED fixtures down the years — starting with the original impression 90 and RZ 120 zoom. The profile of these was raised when they featured on Lady Gaga’s Monster Ball tour 2010 — along with the white light versions.

“I think the X4 is a natural progression — and a great fixture for tight places or smaller shows,” believes the lighting designer, adding that the compact size has enabled them to be built into the mirror ball for the latest tour, as well as being used inside the band risers. “They are great lights — very fast and bright — and work well alongside the video elements and discharge lamps. It has a great zoom and I particularly like the fact that there is a separate white LED.”

Working closely with the artist himself to deliver a dazzling stage scenography (supporting eight backing musicians) Cory has incorporated a large video wall, some pyro effects and many other lighting based elements — knowing that the X4’s had the muscularity to hold their own.

Behind the lens, the X4 offers 19 RGBW LED’s, each rated at 15W, providing a homogenized beam with high output that can cut cleanly through modern stages, while a 7:1 zoom ratio offers a fully variable beam — from a tight 7° to a wide 50°. Additionally, the X4 delivers high output with even color mixing, offering a wide color palette and the ability to individually control the intensity of the 19 LED’s, allowing unique looks and animations to be programmed on the fly.

Summing up, Cory states that “the X4 is a great asset to the arsenal of lighting fixtures; they pack a lot of punch for their size and weight and are very versatile.”

He highlights the many attributes of the new generation of LED’s, ranging from efficiencies to sheer touring economics. “Most importantly the LED based fixtures continue to get better and better,” he says. As if to prove the point, he is already working with the next-generation, smaller sibling, the X4S — programming a tour with Swedish duo, Icona Pop.

As for the Bruno Mars tour, this now moves to Europe where fans can expect a similar electrifying stage production.