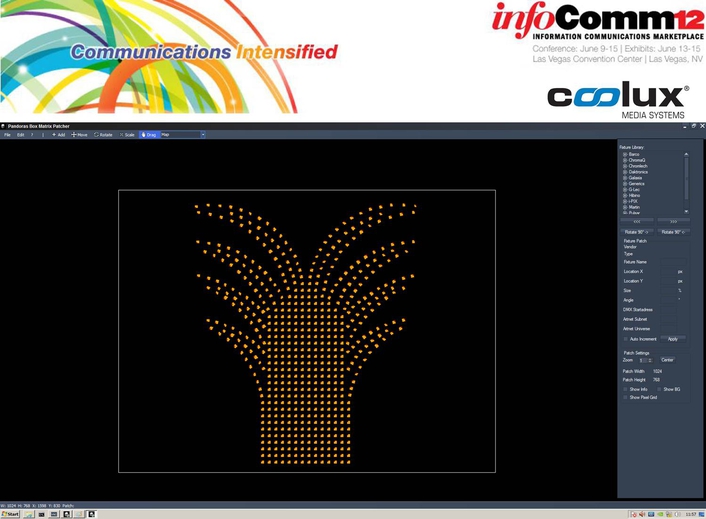 The new version 5.1 features are:

- NEW MATRIX PATCHER
The Pandoras Box Matrix Patcher introduces a new Map-View making it possible to re-locate individual pixels for creative setups when working with conventional LED processors like e.g. Barco, Daktronics, Galaxia/Winvision etc. When working with uncommon LED-fixture shapes, this new feature will be a great time saver when it comes to repositioning pixels to fit the actual LED design.

- TIMELINE KEY PRESETS
Another major new workflow feature is the update-preset function. Pandoras Box users can now store and recall any amount of timeline keys as presets and update their data to all instances. This feature will significantly reduce the time needed to program the timelines for complex shows and is a direct result of the close interaction between coolux’s research and development team and the live production feedback gathered from Pandoras Box users.

- LIGHTS & SHADOWS
The Aeon FX Engine now supports multiple lights as well as real-time shadow projection onto 3D object layers. This is yet another step towards making it easier for users to realise larger parts of the content creation and compositing process in the Pandoras Box itself. This new feature makes it easy to add a beautiful sense of spatial depth to 3D objects.

- MEDIA ENCRYPTIO
Ncoolux’s new media encryption technology will allow customers to protect exclusive content from being copied or misused, using state of the art AES 256bit encryption algorithms. Users will have the choice between code based encryption generated within the Pandoras Box interface, or dongle based encryption that would allow content to be played only during certain pre-defined times or on certain machines.

- DYNAMIC and 3D WARPING
The Pandoras Box's popular Warper has become more and more flexible in the last years. The Version 5.1 continues coolux's quest for warping excellence through allowing users to animate and control the Warper via keys in the timeline. This new development is perfect for realising projects that involve the tracking of moving head projectors and moving sets, where the warping has to change in a seamless way according to the different positions.

-StreamiX
With this flexible desktop streaming and capturing tool, Pandoras Box users are able to easily stream content from one computer to another. For example: During a presentation, the presenter’s computer could be connected to a Pandoras Box system, which would get the presenter’s slide show presentation on to a big screen/projection etc. without the need for an additional capture card.

- CURVE EDITOR
The new and improved Curve Editor includes improved value references, different mouse modes and an improved zoom function. The value references create a more comfortable overview for the users, who can now choose between a select, a move and a zoom tool when working with the curve editor.

coolux GmbH will launch their official co-operation with the 4K content specialists atmosphere media at this year’s infocomm as well. The management and production team of atmosphere media consists of highly experienced individuals from a variety of fields including music and film production. atmosphere media’s aim is to deliver premium quality content for creating ambient moods and innovative audiovisual experiences.

infocomm visitors will also have the opportunity to take a closer look at the groundbreaking Pandoras Box Version 5 features that include a Video Export and Recording function, the FireFly™ 3D Particle System and the Aeon™ FX Engine.