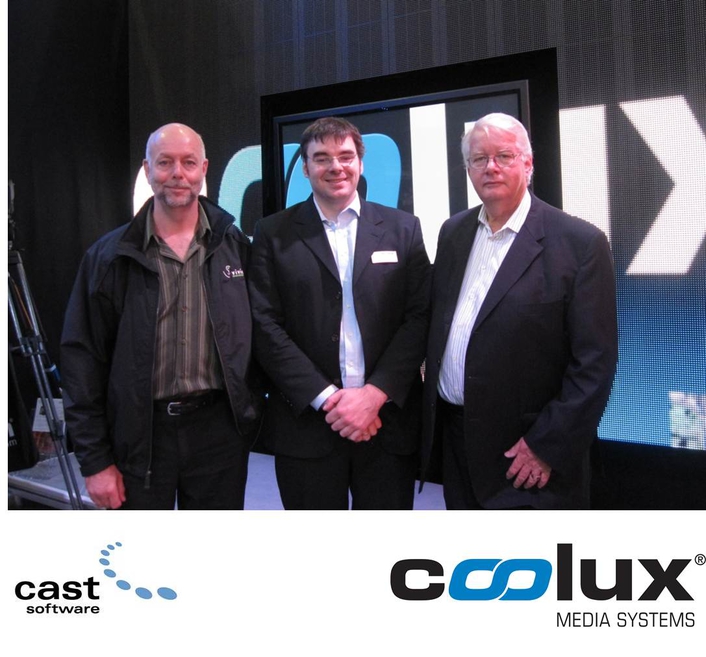 The power of becoming an RWD means manufacturers can expand connectivity of their products to more technology/hardware (perhaps piggy backing on wysiwyg to save development costs) as well as increasing their access to the market by leveraging wysiwyg’s dominance in the market and CAST’s proactive marketing to gain access to a much bigger market for their products. For example, CAST’s bi-monthly e-newsletter, the wysiwyg PLAN is distributed to nearly 20,000 email addresses.

Coolux Media Systems, with locations in the USA, Germany and China is the producer of the award-winning Pandoras Box media and show control system, the solution for realtime video editing and image processing. Pandoras Box Media Servers and Players are a scalable network system with access to all common control protocols from within their Media Net platform.

The Pandoras Box Media Playback System renders in realtime, so any changes concerning the content, the design or data from external files, applications or controlling systems will be executed immediately and thereby are directly visible. Watch changes to every effect’s parameter or switch between several sources, clips or effects and do not waste precious time waiting for images to be re-rendered. Pandoras Box finds its application in widely spread areas from television, trade shows, architectural installations, museums, theme parks, digital signage, corporate shows and events, to theatre, rock ’n roll touring productions and Broadway shows. Wherever videos, pictures and input feeds need to be mixed and distributed to all kinds of displays, Pandoras Box is the perfect tool to use.

wysiwyg is indubitably the industry standard in previsualization and it is CAST’s policy that wysiwyg should connect with the equipment of any manufacturer. CAST has 50 RWDs and over 25,000 objects in its growing Library, which includes automated and robotic lights, mechanical devices, consoles and controllers. Now, as of wysiwyg R25, video can be displayed on LED walls and split into sub sources, as well as facilitating modification of images or video sources and intensity. This innovation opens the door to media server manufacturers to step up and join the RWD network. Coolux did.

Gilray Densham, President of CAST explains, “The mantra of both Coolux and CAST Software is to listen to our customers and then to develop / innovate solutions that work for them. Such was the case with wysiwyg R24’s new CITP Protocol for Video which made it possible for consoles supporting this protocol to stream video content across a network into wysiwyg to be displayed on video screens or projected out of all video type light fixtures. It follows that CAST and Coolux working together makes particular sense given the current creative direction in the industry.

“We make it simple for accepted RWDs. A new RWD develops DLL in concert with CAST’s RWD Kit, which CAST then tests (note, CAST does not develop code or have access to a manufacturer’s code). Once acceptance tested, CAST adds the RWD to its website and provides guidance about how to use certain trade names and trademarks owned by CAST to promote the RWD’s hardware / technology. CAST even helps RWDs at tradeshows by providing Demo Version CDs and loaner dongles and sometimes onsite tech support.

“What’s more, RWDs can use the new wysiwyg DV for free, without a dongle to demonstrate their hardware using one of the 5 different custom-built demo files included. Built to be plug-and-play with a patch onboard, these sample files are extremely easy and reliable to use. DV is a tremendously useful tool; use it in showrooms, classrooms, testing labs, trade shows -- literally anywhere you want around the world.

“Recently, however, we added yet another advantage – since they already connect via wysiwyg, which is the only file format accepted by BlackBox and our new award-winning BlackTrax (both new innovations from CAST BlackBox Corporation), the demand for these leading-edge technologies means RWDs’ technologies will also benefit.”

Jan Hüwel, General Manager of Coolux says, “It has always been our goal to interface with any technology out there and providing solutions that improve traditional workflows. By interfacing with wysiwyg Video Pre Programming and its visualization, it’s brought to a new level, and accessible to everyone. Complex video projection or screen tracking scenarios can be visualized and approved before even getting built. And with BlackTrax available dynamic and interactive video applications it becomes even more appealing. I can't wait to get my hands on this new technology!”

For more information about Coolux and their product line, visit

For information about wysiwyg and its RWD program, or to learn about BlackBox or BlackTrax, visit