“This is the show! If you don't like it, go to the one in Staten Island!” – Rocky Horror Announcer, Fame, MGM (1980)
Today, we’re overwhelmed with news, information and entertainment options. Whether you’re at home or away, broadcasters are all vying for your attention, your time, your money. That’s the evolutionary shift the NAB show participants and attendees struggle with these days.

It isn’t easy to move into new, uncharted areas. It used to be it was big studios, big iron, and big cigars. Now, it’s less about being vertically integrated than knowing how to loosely, flexibly integrate and leverage resources.

Companies like Dalet, Harmonics and Accenture showed off some great production solutions; but we were more intrigued with their emphasis on how they could help content owners/deliverers protect, repurpose, recycle and monetize the assets. 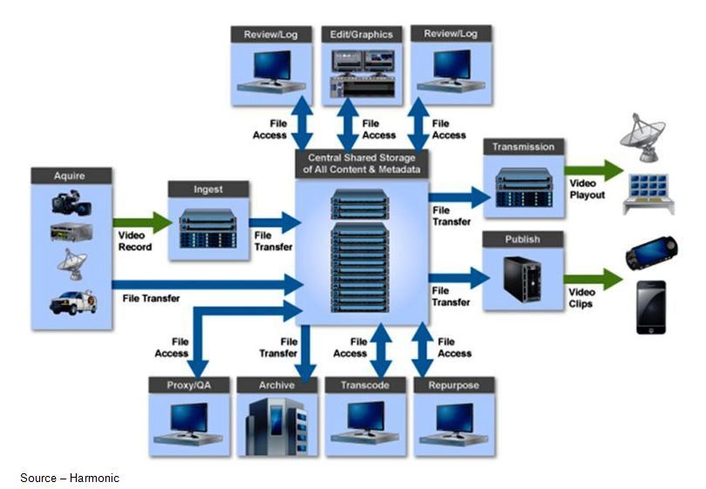 Produce, Monetize – The most active booths at NAB were those that offered complete solutions built around their core technologies.  Solutions that could economically slash production time/costs and enable content providers to provide you with what you want, on the device you prefer … first.  Source – Harmonic

Growing Cast
That’s the focus for the majors – CNN, ABC, NBC, BBC, TBS, Warner, Disney and bollywood – all of which continually produce Petabytes of rich content assets they want to leverage to the Nth degree.

We were surprised at first to see a big presence of non-traditional broadcasters – Lowe’s, Safeway, Target, Home Depot, McDonald’s, Starbucks and Pizza Hut – just as intent on finding ways to improve their connection with consumers. Think about it (which we didn’t before NAB), they have the same problems, networks, stations the indies have. They have to not only produce attention-holding content, they have to also slice, dice and deliver professional-looking content to the store, on the Web, direct to your device.

The new Media Asset Management (MAM) software and systems – along with the big data details on your web/personal device history – enable content producers and deliverers to elegantly provide just the right news/entertainment. It’s spellbinding to see. 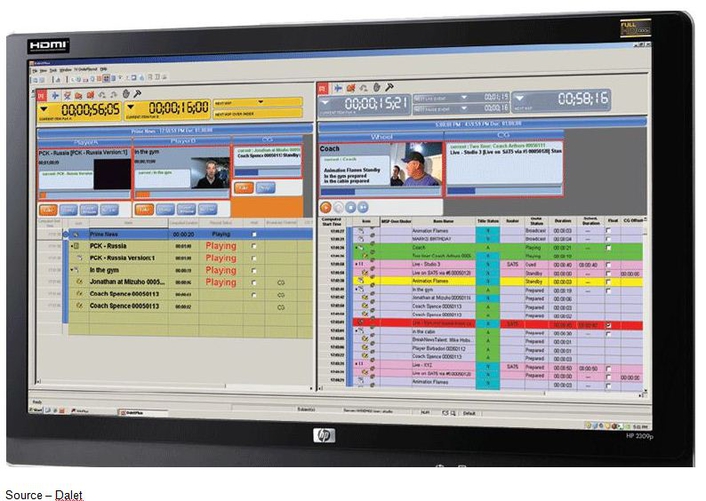 Automate, Deliver – MAM (Media Asset Management) software, such as that from Dalet, enables content producers to repurpose content to meet the wants/needs of consumers, regardless of the device they use for viewing entertainment. In addition, content management and distributors can increasingly show the viewer ads that are tailored to their interests by mining big data. Source – Dalet

The automation gives users the content they want on the TV, iPhone/smartphone, iPad, PC, the fridge/toaster and whatever comes next. It also delivers the appropriate ads for that time, that device. Of course, there are hurdles to overcome, as Montgomery McNeil noted, “A pie in the face comes with the job. That's what my mom says; she should know.”

While a recent Pew Research study reported that consumers don’t like targeted, personalized ads, we feel they’re better than the ads you see on TV that are based on some generalized demographics. And, that arbitrary content does give us time to do a few things while the ads play.

And they can deliver that content profitably by surrounding that content with ads that will increasingly be less intrusive because you’ve told them (with your actions, usage) the types of ads that are of most interest to you. O.K., it isn’t foolproof … yet.

There are hurdles that have to be overcome such as what ads you really want to see, how often you are willing to view them, how many and the length of the ads you’re willing to view. They want to approach that fine line where you’re “a little” irritated at the ads but not enough to move away. 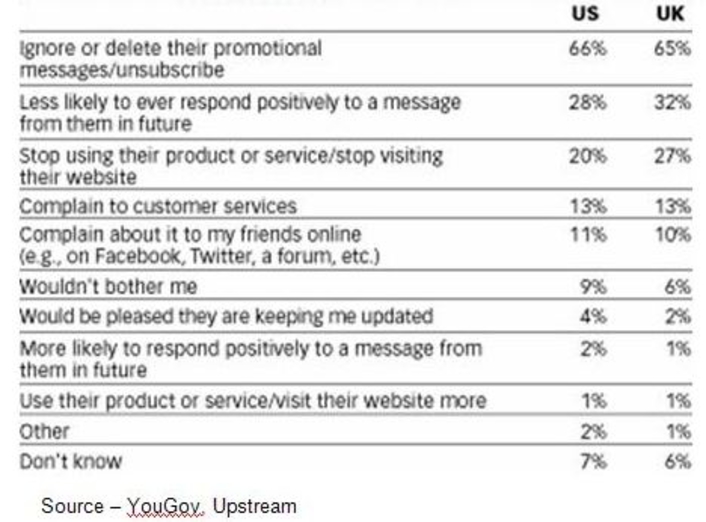 Tightrope Act – The news/entertainment industry is focusing a lot of attention today on delivering just the right content/ad mix because you don’t just get up to go to the bathroom when the material is on your mobile device; you switch channels and sometimes never return.  Source – YouGov, Upstream

Give ‘em some slack … it’s a work in progress.
Leveraging Content
After all, one of their biggest challenges is how to make a buck for getting you the news, information, entertainment you so urgently want. 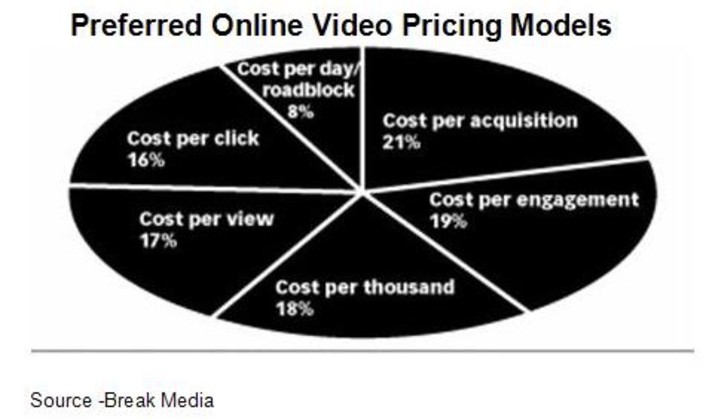 New Pricing Models – Behind the scenes, the industry is struggling to find a pricing model everyone can live with because mobile devices don’t produce the numbers, the results the industry was comfortable with in the old CPM, TV set days.  Source -Break Media

It’s a whole new tough, touchy/feely world or as Doris said, “I must remember this feeling and use it in my acting!” The heart and soul of NAB isn’t about you; it’s about leveraging content for the maximum ROI (return on investment).

The integration leaders like Harmonic and Dalet deliver focal point solutions to large producers, content distribution/delivery people.  Instead, studios form mini-corporations for each film or series they produce and these entities hire all the freelancers on a contract basis and rent everything they will need. Because the freelance teams who produce shows, series, and pictures are usually widely dispersed, the cloud has proven to be a fast, flexible and reliable means of economically delivering projects for you to enjoy. 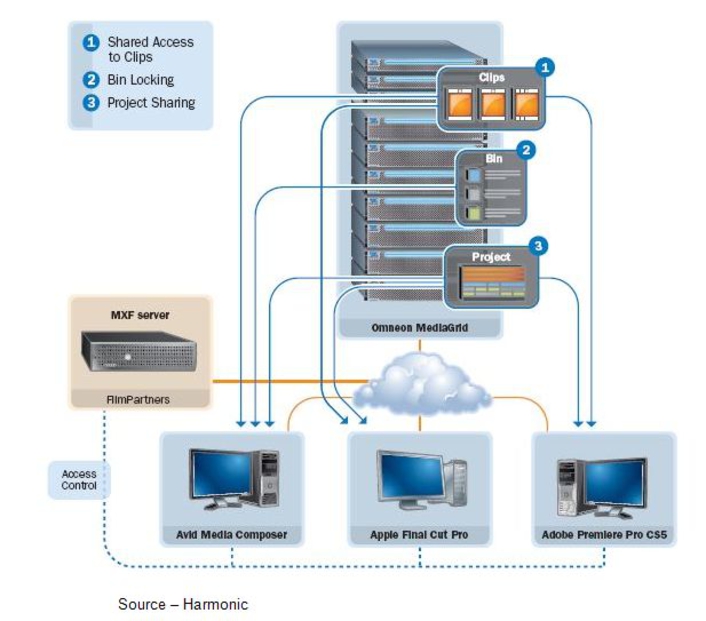 Cloud Production – With production and post-production teams spread across the country, around the globe, content consignment folks can see the value of working in the cloud.  People can come together from the four corners of the globe, work on a project and, move on to new activities, saving everyone time and money.  Source – Harmonic

While everyone touted their cloud solution, the DCIA (Distributed Computing Industry Association) only had a small pavilion on the floor but offered a good series of conference sessions to help NAB attendees get their head around how to make the most of the cloud.

It made sense for production, repurposing content and delivery to your device.And the broadcasters keep saying what Lisa said, “I'm working on it.”The scalable solution is great for a lot of the industry’s storage needs when rapid deployment, storage near the access points and instant delivery are vital.But … there are a lot of reasons the cloud is still not the solution to all of the industry’s needs. 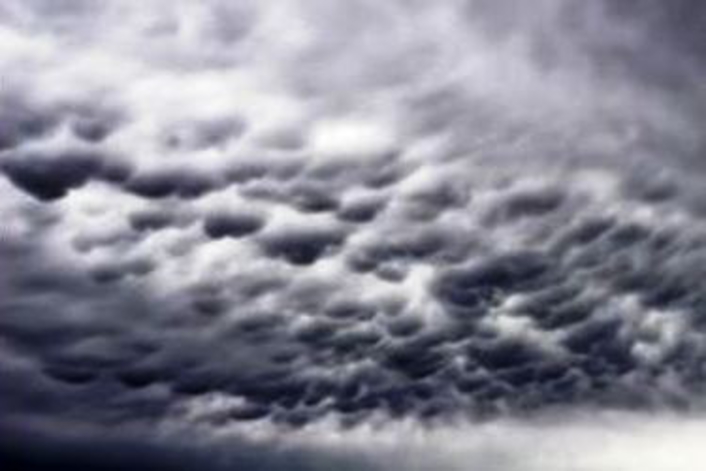 Cloudy Answers – Perhaps the major issue the cloud industry has to overcome is internal communications, education.  Cloud or virtual computing/production has been around for years; but cloud storage without firm responsibility of repositories still leaves people with a sour taste in their mouths.  Source – Wikipedia.org

Clouds Everywhere But…
On our flights to Atlanta, Chicago, Dallas and home, we looked for all of the content folks said they were storing, protecting.  We didn’t see a single cartoon, show or movie along the way.The cloud provides storage services/facilities in one or more locations; and if it’s like TaTa’s 15-plus storage facilities around the globe, they’re connected by really big, redundant data pipes.

Archiving – at least to broadcast/content folks - means different things to different people:
-        capture content and immediately archive to preserve it
-        edit, post produce a project, get it to distribution and archive the finished product in stages – online, nearline, deep archive, true archive, off-site.

None of the archiving of valuable content sat in the cloud or as Miss Berg said, “Less lip, Monroe, more sweat!”

One organization archived over 5TB of content every day, saving everything…including the pig’s squeal. Another firm told us that a typical movie produces more than 250TB of digital files and they keep every bit, byte … just in case.

Instead of entrusting the family jewels to somewhere in the cloud, the organizations use two approaches:
-        In-house HD, tape migration archiving – saving to a ton of HDs for 3-5 years or until it loses its value or tape storage for 5-7 years and refreshing to new/improved tape for another 5-7 years
-         Off-site (usually a duplicate) storage in the side of a mountain

The first approach sorta’, kinda’ works a lot like government programs – solving the problem today and kicking the can down the road.  It’s for meeting short-term needs and developing a long-term, forever archiving answer … later. Tape will be around for a long, long time because it’s cheap, migratable.

For true, store it/retrieve it someday, a better solution can be produced using more creative approaches to Blu-ray based systems that ensure the content cannot be erased or altered and can be moved to higher-capacity disc packs in 30-50 years.The key to its adoption will be much faster read performance, backward compatibility, a capacity increase roadmap, minimum of over-hype such as that we see for the Alpha/Omega cloud storage answer.

Archiving isn’t about sudden fame…it’s about being able to preserve content, entertainment for generations to come. Face it, archiving is about as glamorous as Doris Finsecker described herself, “I'm about as flamboyant as a bagel.”

Practice, Practice – Tellywood is working hard to produce the content you want today when you want it, where you want it, how you want it.  Of course, they also want a way to store their stuff so your great grandkids can pay to see what was so great about the good ‘ol days.

For content owners it’s not the flamboyance or the fame…it’s the money!!!