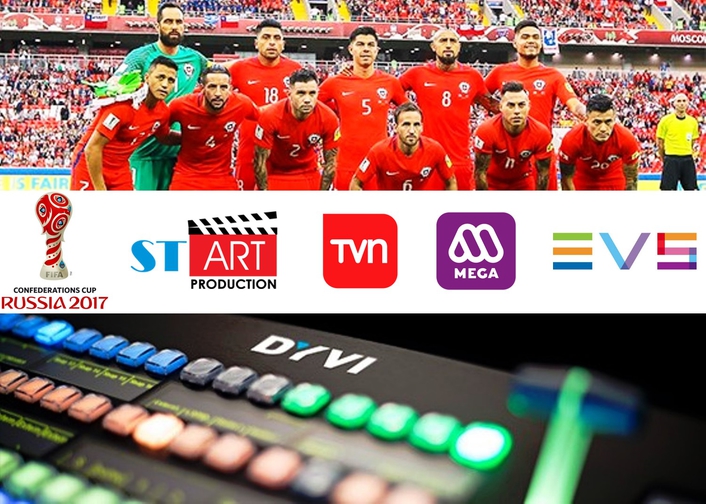 During the 2017 FIFA Confederations Cup, the DYVI switcher from EVS, the leader in live video technology for broadcast and new media productions, was deployed by Russian TV and radio company Start. The switcher was used to cut together live programming of the tournament, which was broadcast by cable and satellite company CTT to Chilean TV channels MEGA and TVN.

Live coverage of the Chilean national team matches, studio-produced footage, interviews in the mix zone and press conferences were created using the DYVI switcher alongside an XT4K live production server. Thanks to DYVI, the production crew could incorporate pop-ups, special effects, replay wipe transitions and other mixer features that it hadn’t previously used in its sports broadcasts. This GPU-based infrastructure also allowed them to create more macros within the switcher for design configurations for an entire match and specific actions within the match, such as individual player-specific transition effects.

“The Chilean producers that operated DYVI were impressed with the convenience of its small-but-effective mixer control panel that they used to assign actions to any button,” said chief producer of Start, Vladimir Shirokov. “The simplicity and speed of the system’s configuration and its ability to integrate with the EVS servers onsite helped us to deliver the best possible live coverage of the tournament to Latin America.”

DYVI offers a powerful combination of enterprise-level IT hardware, creative software and a highly intuitive user interface. Its software-defined nature means it’s both long-lasting and will adapt to any workflow, and its scalable architecture means users choose only the resources they need. By optimizing the capital investment and keeping the operation simple, production teams like those at the 2017 FIFA Confederations Cup can focus on producing great content.