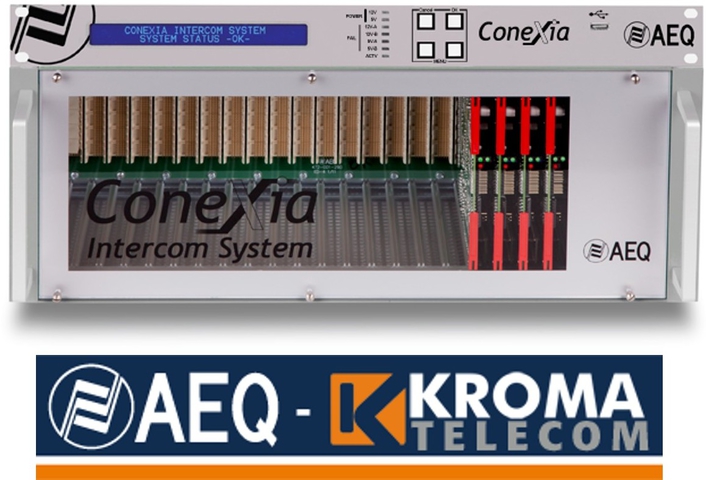 As a result of the integration of AEQ's broadcast audio technology and the experience of KROMA developing intercom systems, the CONEXIA platform was conceived as an integrated solution for the centralized management of audio signals in TV and Radio Studios and as a fully featured intercom system.

Based on a KROMA Intercom Master Controller and an AEQ Audio Matrix, the CONEXIA system has a capacity of up to 1024x1024 cross-points and with a completely modular card structure. What makes the CONEXIA system special is the ability to integrate intercom and broadcast audio sources into the same matrix, with internal sampling at 48KHz @ 24 bits and a 100% redundant system at all levels: power supply, DSPs, controller, links, Etc ... CONEXIA is also compatible with all KROMA intercom terminals, and expands the possibilities to interface with the full range of KROMA accessories (telephone, GSM) and AEQ cards (MADI, fiber optic, IP, VoIP, etc.).

One of the main advantages of the new CONEXIA system is the possibility of integrating broadcast and intercom audio in the same matrix. The merging of both worlds allows the grouping of all available audio sources and avoids the management of two disconnected, unrelated, parallel audio systems in an installation, as well as integrating the stations entire communications using the complete AEQ Phoenix family of AudioCodecs for IP, ISDN, PSTN(POTS), 4G, 3G, etc ...

Since merging KROMA's intercom systems expertise with AEQ's broadcast audio technology, the CONEXIA platform has been rapidly deployed at a large number of customers around the world, highlighting private stations as important as the Mediaset Group and AtresMedia in Spain, or internationally the RAI Corporation for their Milan studios, the National Radio of Russia for its headquarters in Moscow, or the state broadcaster TCS in Salvador. 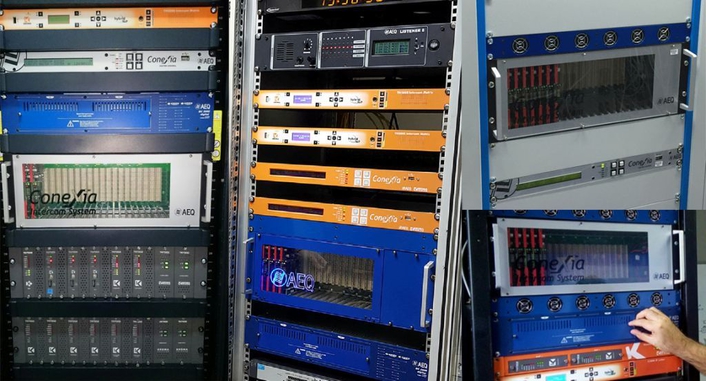 The unique features of CONEXIA as a link between two independent worlds has captivated customers from very different places and applications; from CMTV in Portugal, through TV3 in Spain, the Music Palace in Vilnius-Lithuania, or the Multimedia group In Monterrey-Mexico.

Most systems have been implemented in television production centers, but on some occasions deployed at Radio Stations as well and there are also mobile installations such as the portable production set used by the Mexican company UnoTV/Claro Sports during the Rio 2016 Olympic Games, the Spanish company VAV's last mobile units to be taken into service or the regional Broadcast Network of the Balearic Islands - IB3, attesting to the versatility of a completely modular system. 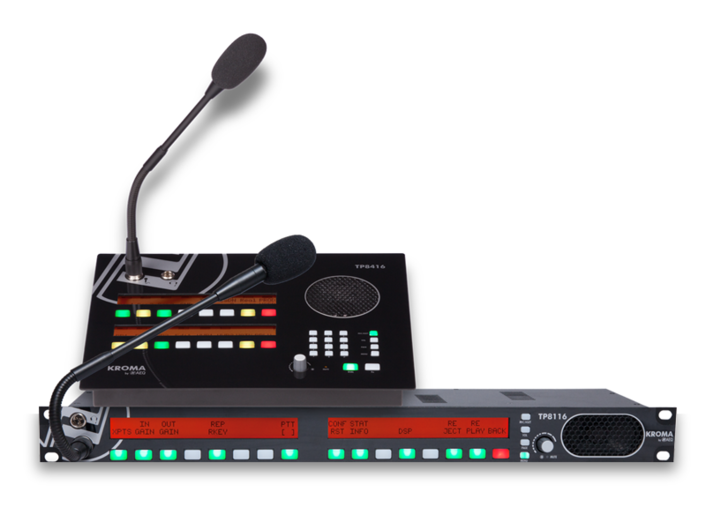 Another unique feature, and that is also becoming a frequently requested complement, is the AEQ Phoenix Family of Audiocodecs. These codecs are suitable for a wide variety of telecommunications infrastructures and integrate 100% operationally through the ConeXia Intercom's management software CrossMapper.

From AEQ we would like to thank all our customers, partners, distributors and integrators for the trust placed in this new solution CONEXIA, and we obviously hope to be able to meet your expectations with new features and models within the AEQ-KROMA family of intercom systems that are under constant development.

For more information on AEQ and KROMA by AEQ or concerning the equipment and systems manufactured and other projects, please visit www.aeq.es, send an e-mail to aeqsales@aeq.es or call +34 91 686 1300.