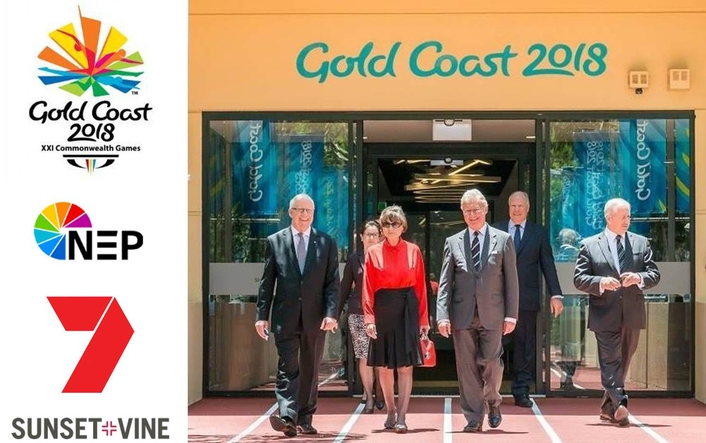 The global headquarters of the Host Broadcaster delivering the Gold Coast 2018 Commonwealth Games (GC2018) television broadcast have been officially opened  today by the Minister for the  Commonwealth Games, the Hon Stirling Hinchliffe MP.

Led by NEP Australia, with the support of production partners the Seven Network (Seven) and Sunset+Vine (S+V), the Host Broadcaster will produce High Definition multi-camera television coverage across 11 days of sporting competition plus the Opening and Closing ceremonies (with the Opening Ceremony also to be produced in 4K Ultra HD) for delivery to rights-holding broadcasters around the world.

The Host Broadcast team currently numbers 20, comprising the key management group and broadcast training manager, two venue-planning teams and administrative staff. It will expand to 30 members in early 2017, 60 over the course of next year, and reach a Games-time workforce of more than 1,200. 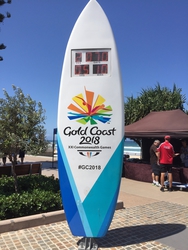 Commonwealth Games Minister Stirling Hinchliffe said GC2018 would be the biggest televised sporting event in Australia this decade. “With an expected television audience of 1.5 billion people worldwide, it is vital the broadcast is provided by an organisation with exceptional expertise and experience,” Mr Hinchliffe said.

“I congratulate NEP Australia on the opening of its Host Broadcast operations on the Gold Coast and welcome the opportunities they will provide, including valuable work-experience and training for university students, and jobs for local industry professionals.

“This is a great example of a unique industry coming to Queensland because of the Games and I am delighted their team will call the Gold Coast home for the next two years.” GOLDOC Chairman Peter Beattie AC added his congratulations to NEP Australia. “This office opening represents a very tangible legacy for the Gold Coast and Queensland that is a direct outcome of the Games. “There is the very obvious economic benefit of the many NEP staff relocating to the city in the lead up to and duration of the Games, but importantly the expertise they impart to students will enable them to kick start their careers with skills gained working amongst the world’s greatest multi-sport global broadcasters.

“We look forward to sharing the exciting journey towards 2018 with the NEP Australia team,” Mr Beattie said. To ensure Gold Coast 2018 achieves the best-ever coverage across all platforms, the Host Broadcast team are drawing on their collective experience from previous Commonwealth Games, Olympic and Paralympic competitions.

NEP Australia President Soames Treffry said: “As our previous Commonwealth Games experience has shown, detailed forward planning is key to getting a project of this complexity off to a flying start. We hit the ground running, with our core team in place more than two years from the Gold Coast 2018 Opening Ceremony.”

Event Director – Rio Olympics, Commonwealth Games and Chief Revenue Officer, Seven West Media, Kurt Burnette said: “With sports production and great storytelling in our DNA, Seven is delighted to share our experience and expertise and is proud to be a key partner in delivery of an event of this significance for our country. We are excited to be a part of the team that will deliver world-class coverage, not just to every Australian, but to the world.”

Beyond its partnership with NEP and Sunset+Vine, Seven will also create the most extensive coverage of a Commonwealth Games across its broadcast television platform and on connected devices in the network’s single biggest local sports production commitment in Australia since the Olympic Games in 2000.

Seven’s Head of Sport Saul Shtein said: “Seven is delighted to be joining with NEP and Sunset+Vine in what will be the biggest event to hit our shores since the Olympic Games in Sydney. We are looking forward to being a partner in the production of the global television coverage and bringing these Commonwealth Games to all Australians.”

Jeff Foulser, Chairman of Sunset+Vine, added: “After the success of the Glasgow Games it’s great to see the team making great strides towards Gold Coast 2018. Together we’re covering all the bases to provide an innovative, high quality and reliable Host Broadcast service.”

The 121-week project schedule is well underway. Current priorities include:
• Surveys to determine camera positions across 20 venues in and around the Gold Coast (including basketball from Cairns and Townsville, and shooting and track cycling from Brisbane).
• Confirming Host Broadcaster space requirements at each of the venues.
• Determining broadcast compound layouts.
• Sourcing suppliers.
• Connecting to Queensland universities and colleges for the Host Broadcast training program.

The project’s training program includes work experience opportunities for 200 Queensland students during the Games, who will work alongside some of Australia’s leading broadcast professionals. This will provide students with invaluable broadcast industry experience for their future careers in television.

As part of the training program, eight students have been selected from six Queensland universities to be part of the Seven Network’s Rio 2016 Olympic Games coverage at NEP’s studio complex in Sydney. This integrated learning approach is a unique opportunity for these students to be part of a live multi-sport international broadcast, experience they can bring back for their work on the Gold Coast Games. Many of these students attended today’s launch.

Seven has been a great supporter of the training program, with Queensland students also attending Seven’s AFL matches to observe and learn from the telecast production teams.

The Host Broadcaster is also responsible for the International Broadcast Centre (IBC), which is the nexus of all Commonwealth Games broadcasting activity, handling incoming video and audio from the venues and distributing it to broadcast rights holders’ home countries. The IBC, located at the Gold Coast Exhibition and Convention Centre (GCECC) at Broadbeach, will also manage outgoing worldwide transmissions from rights holders based on site. During Games time more than 1,200 broadcast technical and operational experts will work from the IBC and venues to deliver event coverage. 1,100 hours of live television will be transmitted via 25 outside broadcast vehicles and control rooms. 350 cameras will be deployed at venues in and around the Gold Coast, with more than 100km of broadcast cable laid.

About NEP Australia
NEP is Australia’s largest and most experienced outside broadcast and studio facilities company, providing broadcast infrastructure for major sport and studio productions across the country and internationally. NEP facilitates more than 2,000 hours of Australian broadcast television each year, including live sport (NRL, AFL, Cricket, Golf), popular series and drama (My Kitchen Rules, The Chaser, Family Feud, Neighbours) and live entertainment and event programs (Dancing with the Stars, The Voice, X Factor, The Footy Show and the annual Logie awards). The company is also internationally recognised for its technical expertise in host broadcasting and major events, managing complex projects including the 2018 Gold Coast Commonwealth Games, 2014 G20 Leaders’ Summit, and 2014 Glasgow Commonwealth Games.

About Seven Network
Seven is Australia’s most-watched broadcast television platform across an expanding platform of channels, including Seven, 7TWO, 7mate, 7flix and racing.com, and a key business of Seven West Media, Australia’s leading multiple platform media company which has a market-leading presence in broadcast television, magazine and newspaper publishing and online. The company is the home of many of Australia’s best performing media businesses and biggest content brands including My Kitchen Rules, Home and Away, Sunrise, the Australian Football League, the Olympic Games, Better Homes and Gardens, marie claire, New Idea, Who, The West Australian, Presto and PLUS7.

Seven is focused on delivering the biggest sports events to all Australians. Seven’s long-term partnerships confirm the company’s leadership in sports television with the network continuing to dramatically expand its coverage of major sports across its broadcast television platform, online, mobile and other emerging forms of content delivery. Seven is the network of the Australian Football League and all major state leagues; the Olympic Games; the Paralympic Games; the Commonwealth Games; the Australian Open Tennis Championships and all major lead up tournaments; Wimbledon; the World Swimming Championships; the National Football League, including the Super Bowl; the Melbourne Cup Carnival including key Spring and Autumn racing carnivals; the Sydney Hobart; and in golf The Masters from Augusta and all major golf events in Australia.

About Sunset+Vine
Sunset+Vine is a leading independent supplier of sports programming to broadcasters in the UK and overseas. It has won over 40 broadcast awards including nine Royal Television Society awards and six BAFTAs most recently for “Best Sport and Live Event” in relation to its production of Channel 4’s ground-breaking coverage of The London 2012 Paralympic Games.

Sunset+Vine was appointed as primary production partner for BT Sport (launched August 2013) and now produces the channel’s live English Premier League Football and Aviva Premiership Rugby matches and all support programming. The company was Host Broadcaster of the Glasgow 2014 Commonwealth Games, in partnership with NEP, as well as for the Volvo Ocean Race 2014-2015.

It has recently been awarded both the ICC’s Live Events Production Services contract 2016-2019 and the ICC’s Non Live Programming contract for the same period.

A leader in Advertiser Funded Programming, the company devised the world’s most watched weekly sports’ show “Gillette World Sport” (shown in 180 countries at its peak) which has recently been re-commissioned. Mobil 1 - The Grid is also amongst its extensive portfolio. The company is part of The Tinopolis Group.