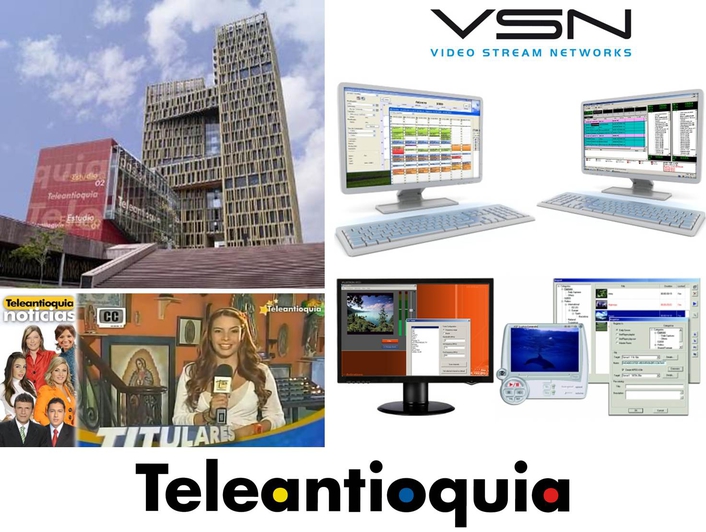 .
VSN has provided the regional channel Teleantioquia with a fully automated and redundant HD broadcast playout system as well as several solutions for media asset management, program scheduling and compliance recording, which have been implemented in their new facilities.

The regional channel with high ratings in Colombia has bet on VSN’s technology for the complete upgrade of their systems. Teleantioquia, which has been using the Spanish manufacturer’s solutions since 2007, relies again on VSN due to ‘their excellent value for money, constant support and their ability to offer a global, seamless SD-HD solution featuring a flexibility and integration capacity unheard of in the market’, as pointed out by Carlos Arango, Production Coordinator of Teleantioquia.

The channel, which opened their new facilities including two totally renovated studios last January, broadcasts in XDCAM HD format. Teleantioquia has implemented a fully redundant two-channel VSNMULTICOM playout automation system in its master control room, operating on redundant and fiber storage VMAX HD servers. The system includes two simultaneous ingest channels. They will be managing their media contents with VSNSHARER and monitoring their on-air activities with the compliance recording solution VSNLEGALREC, which offers the ability to record up to four channels at once. Also included in the project is the traffic and planning solution, VSNCREATV, for the management and sale of advertising contracts and program scheduling. This solution has been installed in full integration with an invoicing system that was fully developed by the channel itself.

Besides the complete and integrated offer of a seamless workflow, VSN also reconditioned the channel’s old servers in order to use them in the studios as I/O servers of live contents.

VSN technologies won the bid thanks to the close collaboration of the Spanish company with its official dealer in Colombia, the Compañía Curacao de Colombia, which won the first phase of Teleantioquia’s installation project back in 2007.

About Teleantioquia
Teleantioquia was founded in 1985 as the first public regional TV channel in Colombia. The channel develops, produces and broadcasts media contents to multiple convergent, technology media that inform and educate, while entertain, all family on the basis of values, social responsibility and an open view to the world. Their broadcasts reach the whole country, even internationally. Currently, Teleantioquia’s general manager is the social communicator Selene Botero Giraldo.