The seventh full-length tour of their incredible 20-year career, Coldplay’s A Head Full Of Dreams boasts one of the year’s most acclaimed productions and marks the third time the band has hit the road with Stageco Staging Group.

Designed by the celebrated Misty Buckley, following her work on Coldplay’s appearance at the NFL Super Bowl 50’s halftime show in February, the latest stadium tour sees a lavish explosion of colour accompanying the crowd-pleasing performances by the Chris Martin-fronted fivesome. 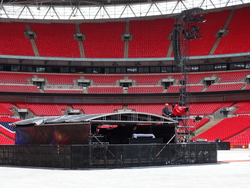 This time around, Stageco is building the sub-structure for the 65m wide x 25m deep main stage, the 30m long B-stage runway and a C-stage on which the band play a short, intimate set amongst the audience at the rear of the stadium. The company is also responsible for the steel structures that support the central video wall and side screens, the rigging points, PA and spot towers, front of house risers and camera platforms.

Although the tour began in Latin America at the end of March, it has had a long gestation according to Stageco President Hedwig De Meyer who heads the project for the company along with Dirk De Decker, International Projects Director. 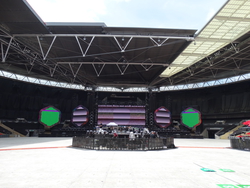 “My first meeting about the production was in June 2015 and because the band are also involved in many creative decisions, a lot of options were left open for a significant amount of time,” says De Meyer. “As a result, some aspects of the design were still being finalised just a few weeks before the tour so this has been a long process. Obviously that kind of thing affects our planning but it’s nothing that we haven’t dealt with before and our experience and flexibility enables us to respond well under pressure.” 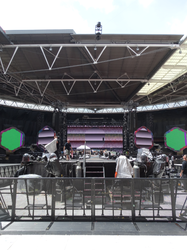 Built in two and a half to three days, the Coldplay stage is a roofless creation – a relatively unusual prospect for Stageco, given the inconsistent European weather. “It’s completely open to the elements,” comments Bill Leabody, the band’s production manager, who first worked with Stageco on an early ’90s Simple Minds tour. “The band like to have a close connection with the audience and if it rains and the crowd get wet, so do they!” 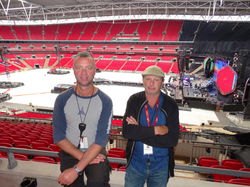 “One of the downsides is that they get through a lot of damp electric pianos!” says Stageco crew chief Koen ‘Kookie’ Daems. He adds: “Being as there are no moving parts and therefore an absence of motors, it’s a much more predictable, straightforward job for us although it has involved a considerable amount of decking. What is new for Stageco, however, is the backstage bunker – a 15m x 7m blacked-out area in which all the production elements are hidden from the audience.”

Throughout the European leg (May 24-July 6), Stageco has been ‘leapfrogging’ two systems, each requiring 12 trucks of steel and a crew of 12. When Coldplay cross the Atlantic for their first full stadium tour of North America in mid-July, a third system will be added with Mary Lou Figley at Stageco US managing the project.