.
Sir Ranulph Fiennes’ groundbreaking expedition to traverse the Antarctic in winter will see man and machine pitched against the most hostile conditions on Earth. Conducted in almost total darkness and with temperatures routinely dipping below -70°C, this is one adventure for which only the best of breed need apply.

Panasonic was chosen as the technology partner for the expedition precisely because it is uniquely able to provide professional broadcast cameras, broadcast quality handheld camcorders, Toughbook rugged PCs and Lumix and Lumix-G digital imaging equipment up to the task. But how do you train explorers and scientists to become unflappable cameramen and what hardships must the world’s best imaging equipment go through before being allowed to document such an important mission? 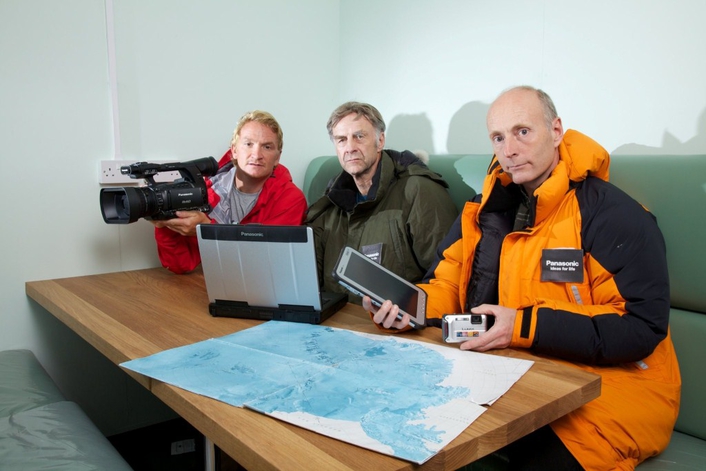 Panasonic & The Coldest Journey with Toughpad, AG-HPX250, Lumix and Toughbook

To learn more, we talked to Hugh Bowring, from The Coldest Journey operations team. He confirmed that the Panasonic hardware had been subjected to the toughest trials and judged ideal for the job. 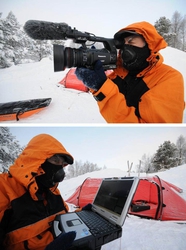 Hugh himself tested the AG-HPX250 in cold chamber conditions and was blown away by its performance. “The footage it produced was faultless,” he enthuses.  Hugh spent a freezing 45 minutes shooting at -58°C, but the pro-camcorder never flinched. “Everything worked really well.” For the expedition Panasonic has devised a dedicated insulated camera jacket which covers except the viewfinder and the lens. “There's a small hole in the bottom where you can put a gloved hand, allowing the main controls to be used,” explains Hugh. “It also has a few pockets which allow us to use heated pouches, the kind you snap and they stay warm for about ten hours.”

To judge how the AG-HPX250 would perform in the wild, the Coldest Journey team conducted field tests in Sweden, shooting material in temperatures of -40°C. “The only thing to suffer were our camera man’s fingers,” moans Hugh. “He ended up with terrible frostbite.”

Naturally, during the traverse no members of the expedition crew are expected to venture beyond the confines of the life-support cabooses with anything less than at least one pair of gloves on. But this in itself creates problems. “When I was shooting in the cold chamber, I basically wore two pairs of gloves on one hand, creating a really thick mitt which was nice and toasty,” recalls Hugh. “On the other hand I wore a thin glove, to allow some dexterity.” For practical reasons, the AG-HPX250’s 3.45-inch LCD monitor won’t be used because of the protective jacket. Instead everything is framed in the viewfinder.

To make life easier for the be-gloved explorers, and to ensure perfect results every time, the team has worked closely with Panasonic to develop a trio of presets optimised for the most common conditions. “It’s our default go-to programme,” explains Hugh. “An Indoors mode has been designed for filming inside the caboose living area under artificial light, an Outdoors preset takes advantage of the light available at the start and end of the expedition, while an Outside Dark mode caters for the period in between.” The entire train of Caterpillars will be pumping out a lot of light during the journey, notes Hugh, so it’s not as if the AG-HPX250 will be required to work in absolute darkness. 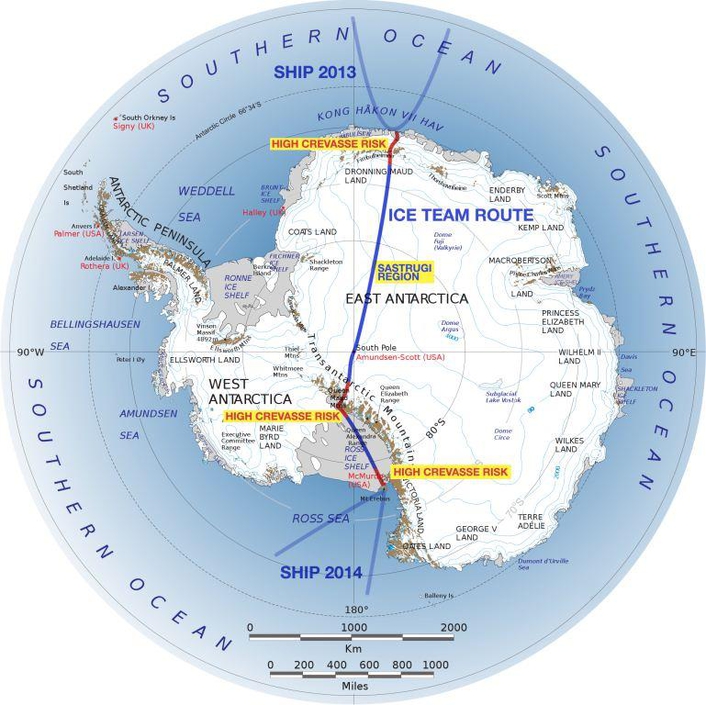 Of course having hardware robust enough to survive the duress of the world’s toughest journey is one thing, making the most of it is another. Enter the BBC, which has trained the team in the art of good photography and film- making. “We'll be providing the BBC with footage from both the ice and the ship en route which will go into its news bulletins,” notes Hugh. Footage will also be used for a documentary being produced for Channel 5, which will be screened after the event.

More in-depth training with the AG-HPX250 and Toughbook rugged computers has been provided by the experts at the Panasonic London Visual Experience Centre (LVEC), based in Pinewood studios. 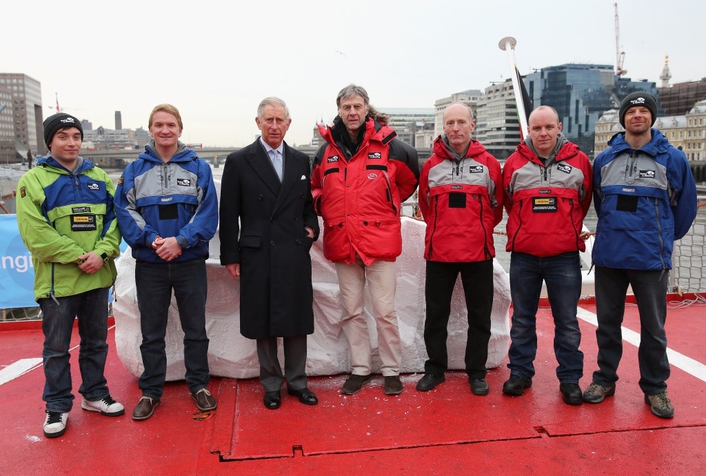 The Coldest Journey Team and HRH

“This was essential for us. Just dealing with white balance correctly is quite a big issue when you're out on the ice,” says Hugh. “We also had tutorials on how to edit, compress and upload recorded images, using our Panasonic CF-53 Toughbook computers.” During the traverse across the Antarctic continent, contact with the outside world is limited and there’s a satellite upload restriction of just 128kbps. “You have to reduce the size of a recorded file while retaining a good enough resolution to be broadcast on the BBC,” explains Hugh. The original Full-HD files will be used for the Channel 5 documentary.

The Coldest Journey team is not just relying on Panasonic professional hardware; they will also be equipped with Panasonic’s award-winning consumer products, namely top-of-the-line HC-X900M camcorders, Lumix DMC-FT4 compacts and DMC-GH2H Micro Four Thirds system cameras. Hugh Bowring says all have a vital roll to play, both in the caboose and on the ship. They are also being used extensively by the Operations Team prior to departure. “We're been building up a fairly hefty archive of images and video footage which will eventually be passed on to the programme makers and posted online,” he reveals. “We're just trying to document as much as is humanly possible.” 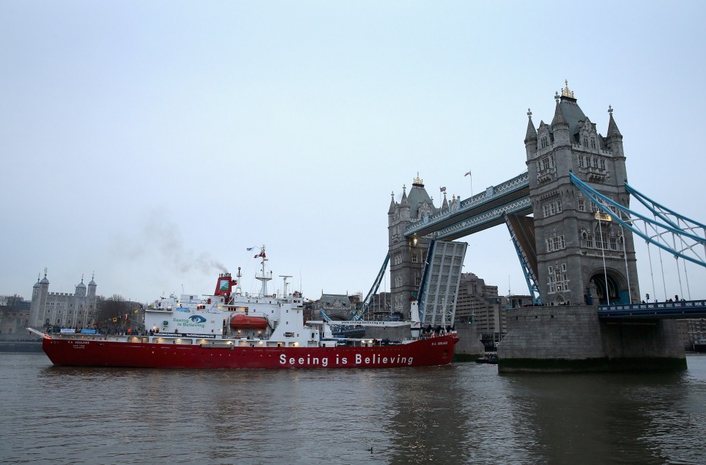 The exceptional quality and versatility of the camcorders and Lumix cameras is proving invaluable. By way of example, Hugh says he used a DMC-GH2H DSLR to shoot hi-def video of the arrival of some of the trip’s heavy machinery, although the approach was far from conventional. “I filmed a lorry bringing one of the cabooses to our warehouse, while riding pillion on the back of a moped” he confesses. “The original footage is about three minutes long, but we're going to speed it up to about 10 seconds.” The DMC-GH2H has a 16.05 megapixel Live MOS Sensor and features Advanced iA (Intelligent Auto) mode with image stabilisation, which makes such a stunt possible. High definition footage is recorded at 1920 x 1080/50i. “The results look really great. You can rely on Panasonic,” he says.