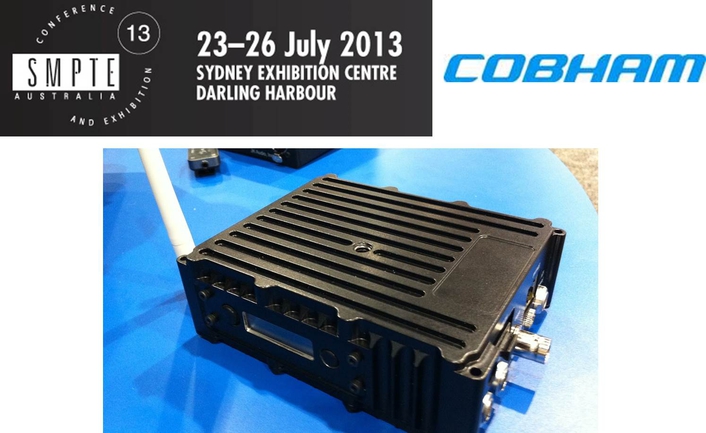 Cobham’s connectivity solutions can be found at The AV Group, Stand H17, during SMPTE 2013
Cobham, the RF specialist company that uses cutting edge communications technologies to empower broadcast users, will be on hand at SMPTE Australia 2013 to feature its latest IP-based HD encoding technology.

Cobham’s Broadcast Systems Director Stuart Brown said, “Australia’s move from the use of traditional 2.5 to 2.7 GHz bands to lower frequencies has not only prompted considerable debate, but a fair amount of uncertainty.

“Fortunately, because we have already undergone a similar transition in the UK and continental Europe, we have developed technology that not only offers camera operators the ability to establish the bi-directional connectivity in the frequencies sought by Australian broadcasters, but the ability to encode and transmit live broadcast quality HD video from anywhere that has broadband access.”

Cobham’s IP encoder is a light, easy-to-add accessory that enables a reporter to go live wherever there is IP connectivity. The encoder provides even more bit rate efficiency with the additional benefit of the ability to operate in standard, low and ultra-low latency modes. And with power consumption rated at a very low 7-9 watts, the encoder is capable of extended periods of deployment.

Brown added, “Every Australian news cameraman should have one in their bag.”
A control panel on the encoder enables a cameraman to select pre-sets directly from the box rather waste time connecting to and configuring via a laptop. It also offers the option of broadcast-standard IFB talkback, which takes advantage of in-built Bluetooth and WiFi for connectivity between presenter, camera and newsroom, including access to IT facilities, email and the Internet that can be shared by the entire location crew.

MediaMesh removes traditional restrictions on live production to enable on-location journalists to establish a broadcast quality path for live two-ways; remote camera control; high quality file transfer; and a high-capacity internet connection with access to base newsroom computers. The entire package fits within a single, easily transported, case that can be in operation in minutes.

MediaMesh is able to take advantage of Ka-band satellite uplinks, which means that its 75cm satellite antenna can transmit genuine HD live video, but with a much smaller dish. Equipment and satellite time are also significantly less expensive than traditional DSNG systems.

Cobham specialises in meeting the demand for data, connectivity and bandwidth in defense, security and commercial environments. Offering a technically diverse and innovative range of technologies and services, the Group protects lives and livelihoods, responding to customer needs with agility that differentiates it. The most important thing we build is trust. Employing more than 10,000 people on five continents, the Group has customers and partners in over 100 countries.