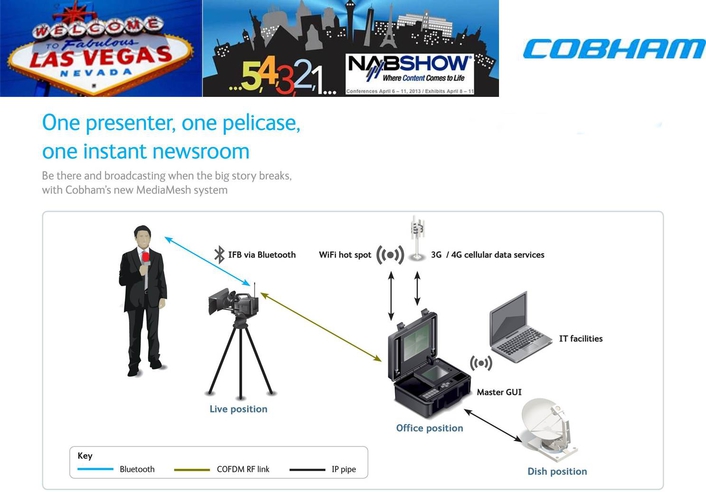 MediaMesh uses groundbreaking wireless technology that removes traditional restrictions on live production to enable journalists in the field to establish, in an instant, everything required for a live broadcast. The transmission system includes a broadcast quality path for live two-ways; remote camera control; high quality file transfer; and a high-capacity internet connection with access to base newsroom computers and cell phones. The fast and foolproof package is designed to fit within a single, easily transported, case that can be unpacked and in operation in minutes.

Importantly, the MediaMesh system takes advantage of Ka-band satellite uplinks. According to Cobham’s Broadcast Systems Director Stuart Brown, “The launch of high capacity Ka-band ‘broadband-over-satellite’ services means that dishes of less than one meter in diameter can be used to transmit genuine HD live video, which has not been possible before. Our MediaMesh satellite antenna, at only 75cm in diameter, is compatible with all major Ka-band services and is one of only two antennas currently approved by Inmarsat for their new Ka-band-based, superfast Global Xpress satellite broadband service, which is being launched this year.”

Small dishes and low power consumption make the logistics of transporting MediaMesh very quick and very easy, which are vital aspects for getting breaking news on air as soon as possible. The fact that MediaMesh is an IP-based platform means that file transfer, internet/email access and access to newsroom IT facilities can be part of a single package. Equipment and satellite time are also significantly less expensive than traditional DSNG systems.

The rest of the MediaMesh system uses Cobham’s COFDM mesh technology to provide wireless connectivity to, for example, journalist’s laptops and can even provide a micro-cell for cell-phone coverage.

Brown added, “MediaMesh enables broadcasters to ensure that whenever and wherever news breaks, a journalist can be reporting from the scene with solid, stable images in less time than it takes to make a coffee. In fact, they can set up, then make a coffee, with time to spare.”

About Cobham
Cobham specializes in meeting the demand for data, connectivity and bandwidth in defense, security and commercial environments. Offering a technically diverse and innovative range of technologies and services, the Group protects lives and livelihoods, responding to customer needs with agility that differentiates it. The most important thing we build is trust. Employing more than 10,000 people on five continents, the Group has customers and partners in over 100 countries.