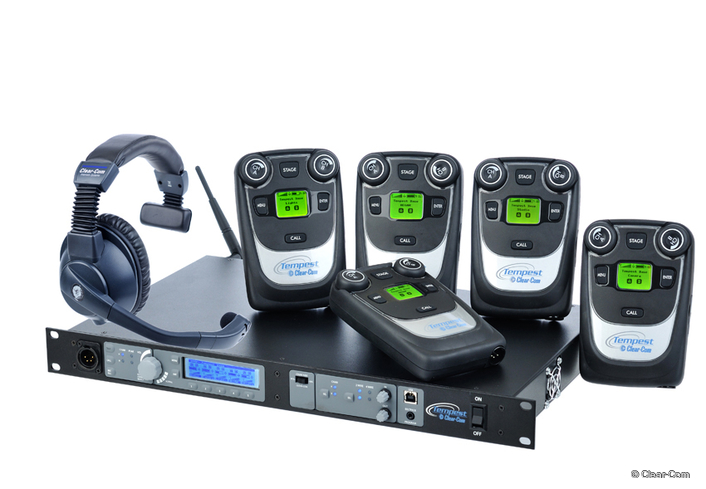 As with all members of the Tempest family, the two-channel Tempest2400 utilizes a patented Frequency Hopping Spread Spectrum RF scheme that not only avoids the need for licensing and frequency coordination, but makes it fundamentally resistant to interference from other wireless devices. This ensures that no matter how crowded the RF environment, communications will go off without a hitch. In addition, once registered to a base station, a beltstation needs no further configuration and roams freely within a single coverage area, making it perfect for theatrical productions, concerts and other highly coordinated events. “Our new two-channel Tempest2400 is ideal for customers who simply don’t require the capacity of the four-channel system, but still want all the benefits of its comprehensive feature set, such as the wireless ISO and Stage Announce features,” says Chris Barry, Product Manager, Clear-Com. “Its simple set-up requirements and portability also make it a tremendous asset for those looking to use it for multiple types of mobile applications, so it’s a win-win for the customer in all aspects.”

50 independent beltstations in a single system

Each Tempest2400 base station supports up to five full-duplex, two audio-channel digital wireless beltstations; by stacking up to 10 base stations together, 50 independent, full-duplex wireless beltstations can operate together in a single system. Other major features include state-of-the-art 2xTX Transmission Voice Data Redundancy and its interoperability with Clear-Com and other intercom systems through two-wire and four-wire connections.

Additionally, the iSelect™ roaming feature allows a beltstation user to move from one coverage area to the next by simply changing the beltstation’s association to another base station; each beltstation can be paired with up to 64 different base stations. Each Tempest2400 wireless system includes T-Desk software, a powerful PC-based control and configuration application. T-Desk offers the ability to monitor and manage the entire wireless system from a remote location via Ethernet connection to a LAN. A PC running T-Desk can also interface with a base station via direct connection over CAT-5 cable.

All members of the Tempest2400 family include an optional remote transceiver that allows remote antenna placement up to 1,500 feet (450 meters) from the base station; data connection and power supplied over standard CAT5e/6 cable with lightweight, fast-charging Lithium Polymer (Li-Poly) battery technology in the beltstation; access to one of six relay closures from the beltstation and vibrating call alert. In addition, a flexible battery solution allows beltstations to operate on standard AA batteries for emergency use; beltstation battery telemetry is displayed in real-time on the beltstation and base station LCDs, indicating how much power is left in each pack.