Designed to be comfortable, rugged and robust, the MasterBelt Station and all Tempest BeltStations can operate in harsh weather conditions and are protected by a durable, weather-resistant ABS co-polymer blend with a high performance polyurethane overmold. The MasterBelt is provided with a rechargeable Li-Polymer battery capable of up to eight hours of operation or can be powered by three Standard AA Alkaline batteries as backup, providing four hours of operations.

“The Tempest2400 system has proven itself as the “go-to” communications solution for remote productions operating interference-free even when other wireless devices are in the same vicinity,” says Craig Frederickson, Clear-Com wireless product manager. “The MasterBelt is the latest development in the Tempest2400 line, giving broadcasters an even more flexible alternative for mobile productions, such as reality TV, sports sideline communications or ENG, where a stationary BaseStation is not desirable, feasible or optimal.”

Tempest2400 operates in 80MHz of spectrum in the 2.4GHz ISM frequency band. Tempest wireless systems will not interfere with traditional wireless microphone, IFB or in-ear monitor systems that operate in the UHF TV band. Because of Frequency Hopping Spread Spectrum (FHSS) technology, the Tempest system does not compete with signals from other 2.4 GHz wireless devices, minimizing frequency coordination and enabling flawless performance. Further, with state-of-the-art Redundant Data Transmit (2xTX), which sends each packet of audio data twice on different frequencies, the system ensures uninterrupted audio communications. 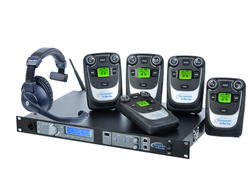 Similar to all Tempest systems the TempestMasterBelt offers three modes of operations: Normal, Shared and Split. Becausethe MasterBelt can also function as a BeltStation, up to six full-duplexwireless users can be in communication in Normal mode. In Shared mode, anunlimited number of wireless users can listen while five have PTT capability.In Split mode, four wireless users are full-duplex talk while an unlimitednumber may listen. The ‘fifth user slot’ is an unlimited single-channel sharedbetween the users with momentary talk buttons only.

About Clear-Com®
Clear-Com, an HME company, is a global providerin professional voice communications systems since 1968. We develop and marketproven intercom technologies such as Analog & Digital Partyline, DigitalMatrix, Wireless and Intercom-over-IP systems for critical communicationapplications in broadcast, performance venues, military, government andenterprise markets. Recognized for our legacy of intercom innovations,production teams around the world have come to depend on Clear-Com for clear,reliable and scalable communications solutions.