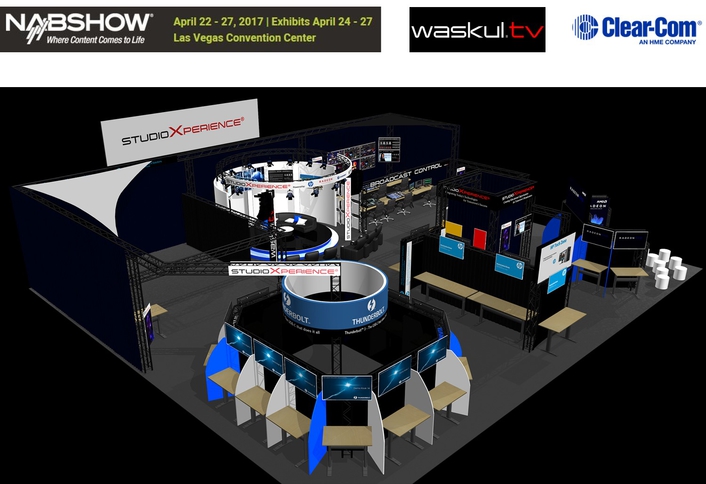 “StudioXperience is Waskul.TV’s ‘travelling broadcast studio’, allowing attendees to see first-hand a full range of cutting-edge video production technologies in action,” said Steve Waskul, CEO of Waskul Entertainment (owner of Waskul.TV). Waskul.TV’s portable studio has been a popular exhibit at major events such as previous NAB conventions, the Game Developers Conference in San Francisco, FMX 2016 in Stuttgart, Germany; the Festival de Cannes in France, and SIGGRAPH 2016 in Anaheim, California. The studio will also be at SIGGRAPH 2017 in Los Angeles this August.

Being included in the prestigious StudioXperience booth equipment line-up is a major honor for any broadcast technology manufacturer/vendor. It is also an opportunity to get substantial product exposure to the broadcast TV and video production community: “The Waskul.TV content from our StudioXperience appearances has been viewed in more than 175 countries by nearly 2 million viewers to date,” added Waskul.

This will be the third consecutive NAB convention that FreeSpeak II’s production communications capabilities will be demonstrated at the StudioXperience broadcast studio booth. The system that Clear-Com is featuring this year includes a FreeSpeak II base station, 10 FreeSpeak II wireless beltpacks, three FreeSpeak II transceiver antennas, and a FreeSpeak II splitter. 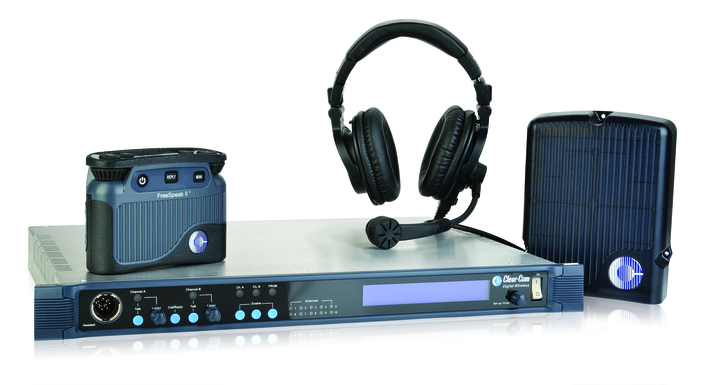 “NAB 2017 delegates will be able to observe a fully-operational FreeSpeak II digital intercom system at a trade show known to have RF challenges – due to all the other wireless devices in use on the show floor,” said Michael Rucker, Clear-Com’s Director of Sales for North and South America. “FreeSpeak II works flawlessly, making it the preferred intercom system in the industry.”

FreeSpeak II wireless digital intercom system offers many advantages to broadcasters, video producers, and live event organizers. One key benefit is its ability to operate in either 1.9 GHz or 2.4 GHz bands. “The 1.9 GHz band is extremely popular with producers who are operating in areas with overloaded 2.4 GHz spectrum due to other wireless intercoms, microphones, and Wi-Fi networks,” Rucker said. “It provides reliable intercom communications in a less congested RF band.”

FreeSpeak II’s coverage is easy to expand, thanks to its use at multiple transceiver antennas. To extend its range – even into hard-to-reach zones – all the user has to do is place and connect more transceiver antennas at the edge of the FreeSpeak II’s existing RF footprint. “Thanks to this feature, our clients have no trouble ensuring wireless intercom connectivity; no matter how big and challenging the space may be,” continued Rucker.

Another major advantage of FreeSpeak II is its use of highly configurable, lightweight wireless beltpacks. Each beltpack can support up to five individually pre-programmed talk groups. This allows FreeSpeak II users to connect to the overall production talk group, and to subdivide into smaller groups dedicated to their specific functions – such as lighting or stage crew. The FreeSpeak II beltpack can deliver up to 18 hours of service on a single charge.

All of these FreeSpeak II capabilities will be available for NAB 2017 attendees to see for themselves at Waskul.TV’s StudioXperience booth; during the NAB 2017 trade show that runs April 24-27, 2017.

“We are proud to have the Clear-Com FreeSpeak II among the leading technologies on display at the StudioXperience booth,” said Michael Rucker. “If last year’s NAB attendance is anything to go by, up to 103,000 registered attendees will be able to test drive FreeSpeak II wireless intercom system in Las Vegas.”

Clear-Com, an HME company, is a trusted global provider of professional real-time communications solutions and services since 1968.  We innovate market proven technologies that link people together through wired and wireless systems.

Clear-Com was first to market portable wired and wireless intercom systems for live performances. Since then, our history of technological advancements and innovations has delivered significant improvements to the way people collaborate in professional settings where real-time communication matters. For the markets we serve -- broadcast, live performance, live events, sports, military, aerospace and government-- our communication products have consistently met the demands for high quality audio, reliability, scalability and low latency, while addressing communication requirements of varying size and complexity. Our reputation in the industry is not only based on our product achievements, but also on our consistent level of customer engagement and dedication to delivering the right solutions for specialized applications, with the expertise to make it work. Around the globe and across markets, Clear-Com’s innovations and solutions have received numerous awards and recognitions for ingenuity and impact to customers.