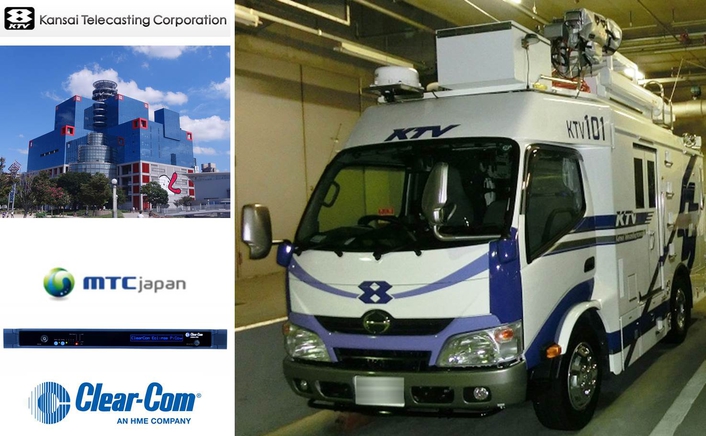 Matrix Intercoms Extend Communications to Entire Mobile Production Fleet
Clear-Com® is providing the Japanese broadcaster, Kansai Telecasting Corporation (KTV), with a unified communications infrastructure for its remote productions. The Clear-Com Eclipse-PiCo Digital Matrix Systems and V-Series Intercom Panels have been installed in KTV’s fleet of mobile production vehicles and integrated with the station’s other communication systems. This has enabled KTV crew members in the field to communicate easily and collaborate effectively with those back in the studio.

The Eclipse-PiCo, supplied by MTC, Clear-Com’s Partner for Japan, is ideal for KTV’s vehicles. The PiCo’s compact 1RU design makes it the perfect size for mobile production vehicles where space is limited. The V-Series 12-key lever control panels are set in the vehicles’ program director, switcher and video engineer positions. The Eclipse-PiCo matrix systems are also integrated with KTV’s other communications equipment, such VHF, UHF and four-way radios, which are required for satellite newsgathering. By connecting the Eclipse-PiCo system in each van along with a variety of other systems, reliable communications coverage has been extended to every KTV production space. KTV is also able to integrate future system purchases with the Eclipse-PiCo systems they have in place.

“We were already using an Eclipse-PiCo in one van in our fleet. When it came time to upgrade our other vans, we decided to continue with Clear-Com since our existing system has performed flawlessly and our staff members are familiar with its capabilities,” says Yasuhiro Asakura, KTV Production Engineering Department Media Engineer. “Since the integration of the Eclipse systems, we have been even more pleased with how they have helped our workflow.”

KTV provides its viewers with a wide selection of drama, sports, news, documentary and variety programming, as well as live entertainment and mobile content. In addition, KTV also produces feature films. The Eclipse Configuration Software (ECS) enables the staff to easily adjust the system setup and customize communication groups for each of those different productions.

“With the Eclipse-PiCo, crew members are able to collaborate smoothly across all their production spaces,” says Koji Kashimoto, Director of MTC’s Osaka office. “They also have significant control over their systems with ECS, can handle the unexpected quickly and are able to work with great efficiency.”

“We’re proud that one of the leading broadcasters in Kansai has chosen to expand their communications setup with Clear-Com,” says Peter Giddings Clear-Com’s Regional Sales Manager, Brazil (Broadcast only), Japan, Korea, Australia and New Zealand. “The small size and rich capability offered by the Eclipse-PiCo system is a huge advantage for small to mid-size production environments such as KTV’s fleet of vehicles.”