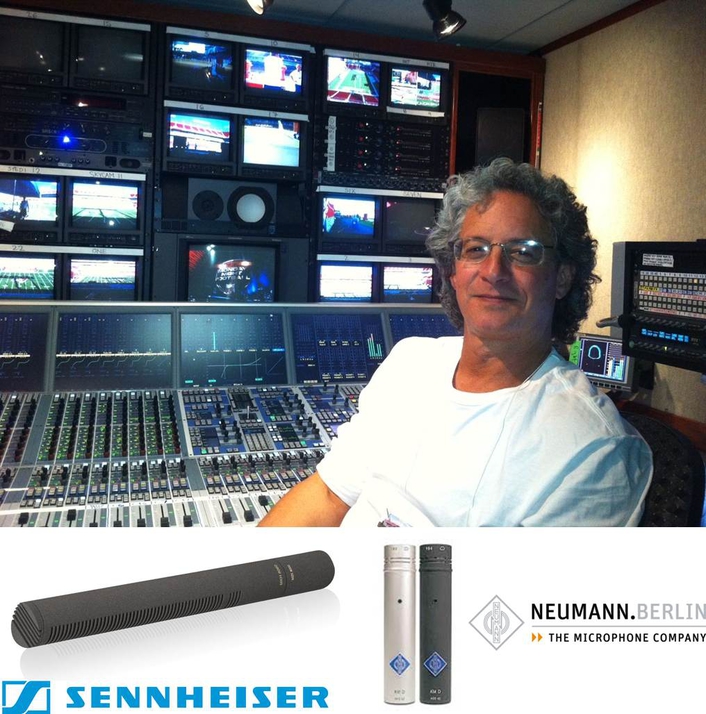 Veteran freelance mixer Jonathan Freed
Jonathan Freed is an Emmy Award winning network mixer who has been in the audio industry for almost 40 years. A trailblazer of digital microphones, Freed is capturing ambient sounds in stadium environments for major US broadcast networks. For a number of years, he has been busy perfecting his approach to make sure the sounds recorded are superbly clear. Among his key building blocks in achieving this are digital broadcast microphones from Sennheiser and Neumann.

Most recently, Freed has been using Sennheiser MKH 8060 and Neumann KM 184 D digital microphones for their clarity and accurate sonic representation. With a different major football stadium as his soundstage each week, Freed’s goal is to provide a broadcast mix that gives the listener a sense that “he or she is sitting somewhere in the stands,” he says. To do this, he has developed an approach that involves using several microphone arrays within a defined area in the stands.

“I think I may be the only guy doing this,” says Freed. “Essentially, I build an ‘X’ out of four Sennheiser MKH 8060s to capture a 4.0 sound field. These mics are for left front, right front, left surround and right surround. I believe that a 4.0 ambient sound field works well in a 5.1 show, as the center channel is occupied solely by the announcers.”

With his use of the Sennheiser and Neumann digital microphones, Freed’s ultimate goal is to achieve the clearest and most transparent sound possible for the ambient sound bed: “What I have discovered while pursuing high-end technology in this area is that the clearer and more transparent an ambient pickup I can get, the larger and more exciting the broadcast sounds.” He also notes that a clear, transparent mix interferes least with the announcers, the music and other elements in the live mix. 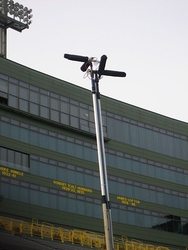 So far, the Sennheiser MKH 8060 shotgun microphone is the best Freed has ever used in his array set-up approach. Typically, he sets his array up in the border area between the stands and the playing field, hoisted up on a 10’ pole. “Two of the MKH 8060s are pointing towards the center front left and front right, and the two rear ones are surround left and surround right,” Freed says. “They are symmetrically aligned with the center of the field – two of the mics are pointed at the stands directly across the field, and the rear two I will point into the crowd towards the back wall of the stadium.”

The MKH 8060 mic array helps Freed articulate the ‘size’ of the environment: “Since these are lobar mics, they help me reach out into the far corners of the stadium. Generally in football, shotgun mics are best used in a low position.” For the high position, Freed relies on a pair of Neumann KM 184 D digital microphones, which have a cardioid pattern and are placed near the announcer’s booth. “The higher array combined with the lower array gives the listener a greater sense of size, yet you can hear individuals within 10’ to 15’ of the mic as though they are seated around you.”

Freed’s approach to placing his mic arrays on one side of the stadium – versus a more common technique which involves placing individual microphones all around the stadium – is somewhat unique and helps him achieve more intimacy and spatial accuracy in his mix. “I am a big fan of one-side miking,” he says. “Many mixers will place mics on both sides, then fold those mixes together onto their surround bed. My opinion is that this causes spatial blur because you are folding one space on top of another – it spoils the phase accuracy of the sonogram you are trying to convey.” For Freed, less is more: “My theory is to use as few microphones as possible to create the sonic impression that when listening to the mix, you are located in a specific place: for example in the stands on the near side.” 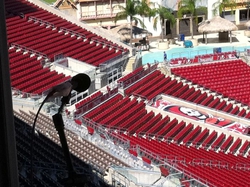 Taking digital all the way
Freed says that using Sennheiser and Neumann digital mics in this way helps him deliver a ‘gigantic ambient atmosphere’ in his mixes. Moreover, he says, they enhance a mixer’s ability to clearly capture ambient sounds with the least possible distortion and the best possible intelligibility. “It really boils down to clear, more transparent sound,” Freed concludes. “Using the Sennheiser MKH 8060 and the Neumann KM 184 Ds, I now have a complete absence of hum and noise and a vastly improved dynamic range.”

“I have been pursuing this for a number of years,” Freed continues. “Several years ago, I could not quite use digital microphones to their full advantage. For example, I could not control them freely from the mix position in a live sports application because I am frequently 1,000 feet from the microphones. But now, using some innovative solutions I have found, they play a critical role in my overall setup.”