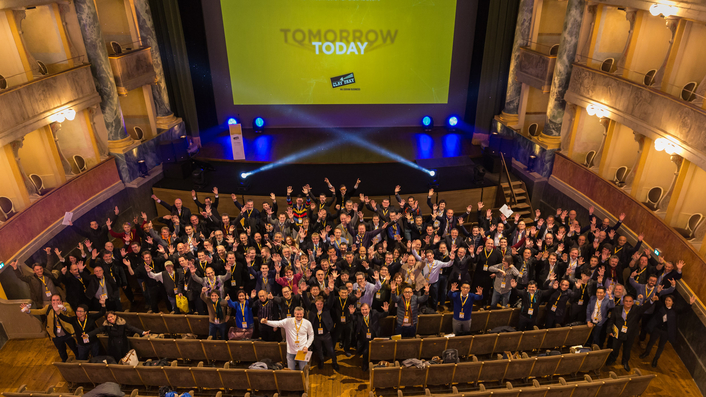 Clay Paky's worldwide ambassadors got together in Bergamo for an International Convention to lay the foundation for the future
There was an enormous turnout at the Convention organized by Clay Paky for their international distributors. No less than 130 representatives from 53 countries around the world met in Bergamo on 3 and 4 February 2015 for an update on the future strategies of the leading company in the field of stage lighting, which has recently become part of the OSRAM group.

The Convention was held in Bergamo, in the splendid setting of the Teatro Sociale, Città Alta. There was a striking contrast between the wooden structures of this ancient theatre and Clay Paky's futuristic computerized equipment.

The Convention's motto was "TODAY TOMORROW", which clearly expresses Clay Paky's strategic aim of always looking to the future, ready to accept new exciting challenges. Clay Paky CEO Pio Nahum however pointed out that future development is founded on past success and that our corporate mission remains permanent innovation and product quality. Thanks to this approach, in recent years, sales have tripled, Clay Paky has managed to win over twenty international awards and relations with lighting designers from around the world have strengthened, as can be seen from the great success of the Knight of Illumination Awards, the annual prize organized by Clay Paky.

Hans-Joachim Schwabe, CEO and Executive Vice President of OSRAM Specialty Lighting division, stressed in his speech that OSRAM has great respect for Clay Paky's work and its team's activity and intends to ensure its operational autonomy, while providing all the technical, financial and logistic support OSRAM is capable of with its 3500-million-euro turnover. He also reminded those present that the relationship between OSRAM and Clay Paky dates back over thirty years and that Pasquale Quadri, who founded Clay Paky in 1976, has always been considered highly by the German group. 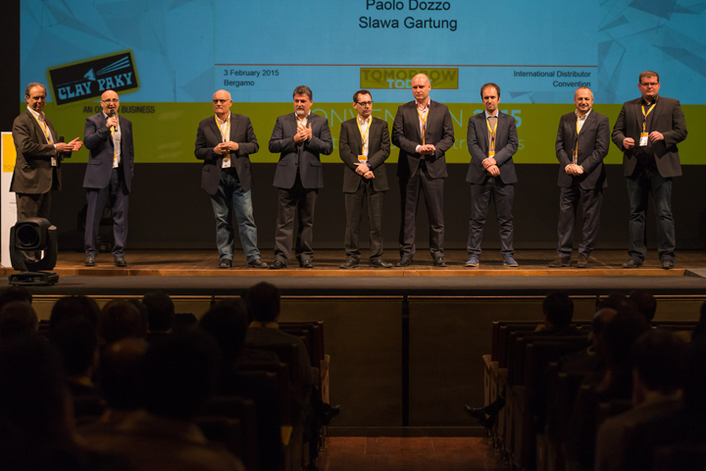 The Convention also provided a chance to present the team behind the company's success officially. The mighty sales team, led by Alberico D’Amato, who can count on eight regional Sales Managers who coordinate the sales in different regions of the world. The competent well-staffed research and development department, whose range of skills include micro-mechanics, electronics and precision optics. Giovanni Zucchinali, a great expert in show lighting and Clay Paky Product Portfolio Manager, gave a brief presentation of the new products that the company intends to launch in 2015.

The Convention was also an opportunity to give prizes to distributors for their contribution to sales in 2014. The "Ambassador of Light" awards were assigned to six companies. "Elektrik Solutions" was named "Distributor of the Year" for its outstanding achievements in a relatively small country, Norway. The Swedish "Interlite" was the "Most Progressive Distributor" for recording the largest sales increase compared to the previous year. "Doka Center", Clay Paky's Russian distributor for over twenty years, received the "Most Loyal Distributor Award". "ACT Lighting" in the United States won the "Best Performance Award" for recording the highest turnover in absolute terms. The Turkish company "Asimetrik" was given the award for organizing the best "Open Day" in 2014. They put on a spectacular Clay Paky product demo, which was attended by more than 600 customers. Lastly “RMB Lights and Sounds Trading” in the Philippines received the "Amazing Determination Award" for managing to sell over 500 Sharpys in a country in which Chinese companies that offer low-priced copies of Clay Paky's invention are highly active.

The Convention dinner took place in the medieval Malpaga Castle (1350), which once belonged to the legendary local condottiero (warlord) Bartolomeo Colleoni. It was beautifully lit for the occasion by Clay Paky battery-powered GlowUp lights. The entire event had a historical flavour, with a show put on by flag-throwers and jugglers in medieval dress, a charming Renaissance dance with torches and fireworks, and a medieval banquet served by waiters in period clothes. 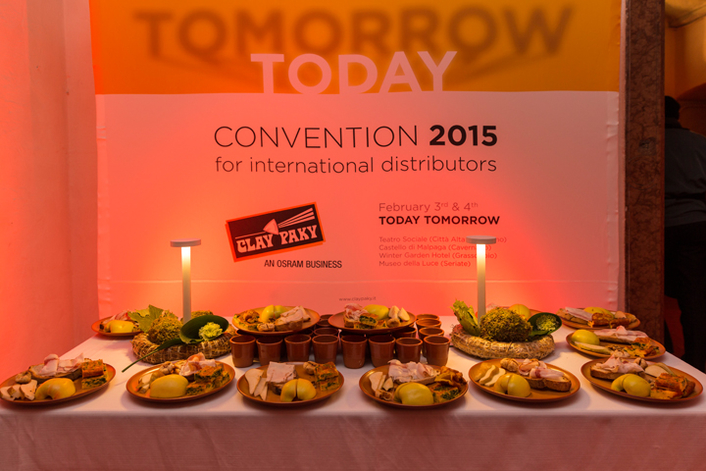 The second day of the Convention was devoted to technical workshops, concerning future technology and products, held by prestigious technical researchers from OSRAM and Philips, who - despite being competitors on the market - share a huge interest in working with Clay Paky owing to our great capacity for innovation.
On closing the Convention, Pio Nahum reminded us that 2015 is the International Year of Light and Clay Paky will be present in many halls at the Expo in Milan.