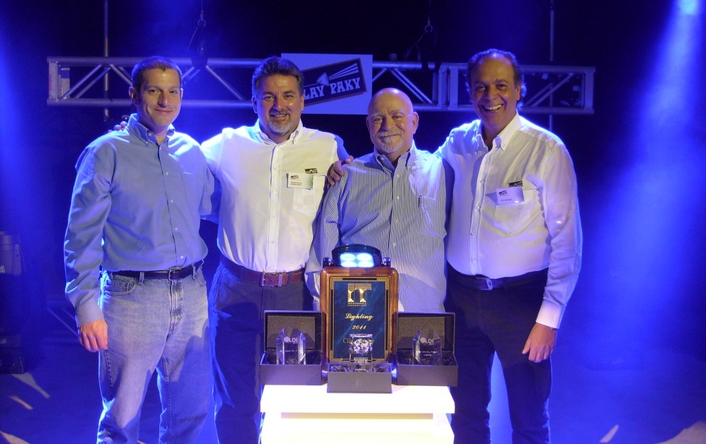 ·    The Sharpy won a 4th Rock Our World Award at a reception organized by PLASA in connection with the annual LDI show. The jury, chaired by Mike Wood, gave the Sharpy their enthusiastic backing. Designer Natasha Katz said, ‘this is the beginning of more lights that have to be like this. Efficient and green,’ while Nick Jones said: ‘Absolutely brilliant - an amazing amount of light coming out of such a small piece of kit.’

·    Two days later success struck again when the Sharpy won a Parnelli Award in the category for Most Indispensable Technology. The Parnellis are unique in the industry for the way they are decided. Initially shortlisted by an industry jury, the winners are then decided by a poll of over 40,000 subscribers to PLSN and Front of House magazines. The award is often seen as an accurate barometer of public opinion and shows the extent to which the Sharpy has established itself in the minds of lighting professionals.

·    The Alpha Spot 800 QWO, one of several new products launched at the US show, won the most keenly contested award of all – LDI’s prize for Best Debuting Product, given in recognition of the year’s most promising technology. The projector impressed the jury with its uncompromising set of optical features: its impressive 7.6° to 55° zoom range; uniform beam distribution at any zoom angle; the unique Stay-Sharp-Zoom feature that keeps images locked in focus while zooming; and the new Dyna-Cue Creator, that enables complex animations with minimal programming effort – everything contained within a small, lightweight construction.

·    An award for Most Creative Use of Lighting went to Clay Paky for their booth, which caught the attention of both LDI judges and the countless visitors who stopped to film the Clay Paky light show. The centerpiece of the design was the all-new, patented Kinetic Light Ring by Parasol Advanced Systems featuring 12 Sharpys configured in a ring. The system, which is able to move the position of moving lights along a predefined path, creates an entirely new approach to stage lighting design. Both the light shows and the booth were designed by Clay Paky veterans Massimo Piccinini and Giovanni Zucchinali.

Pio Nahum, Clay Paky Chief Commercial Officer, warmly welcomed the awards: "Four awards in a single event is a record even for a company as old as ours! We are particularly happy because the awards are for products launched last year – which are proving a massive success – and for new products making their very first appearance. This confirms to me that we are progressing continuously and in the right direction, and that our users appreciate what we’re doing."

Over the last twelve months, Clay Paky has won two other awards in the USA, a 2011 Live Design Lighting Product of the Year and an LDI Best Debuting Product of 2010. Both awards confirm the Sharpy as one of the most popular lighting fixtures in the US market.

Francesco Romagnoli, Clay Paky’s Area Manager Clay for the Americas, commented: "This year Clay Paky has seen a sharp advance in the US thanks to the precious efforts of our distributors, in particular, ACT Lighting, who has been extremely active in supporting our products throughout the country. Currently, Clay Paky’s products are present on many of America’s most important live productions. We hope next year to take another step forward, focusing even more effort and investment on this market.”