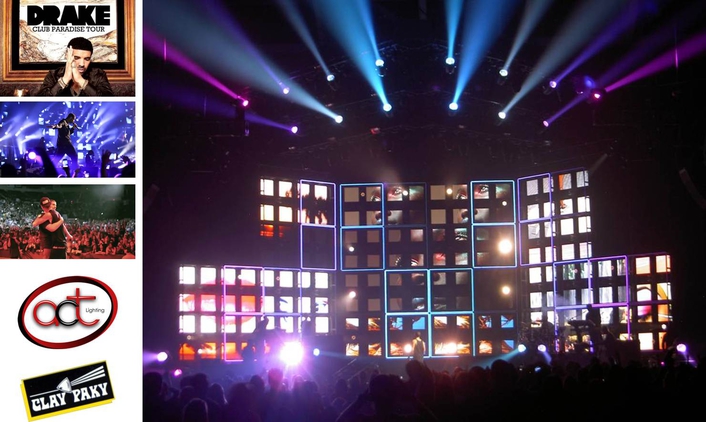 .
As a key part of the lighting rig for hip-hop artist Drake’s Club Paradise Tour, Clay Paky Sharpys are proving how heavenly they are to work with.  The fixtures have been selected by lighting designer Patrick Dierson for Drake’s European and North American tour in support of his second studio album, “Take Care.”

Dierson has described the tour’s aesthetic as “a seemingly factory-like structure of equipment…strong, angular, geometric, almost harsh” reflecting the “strong, masculine stance” of much of Drake’s artistry.  Dierson was charged with creating a very customized look for the show’s lighting from as little custom equipment as possible.

60 Sharpys form the basis of the touring rigs hung in chevron-like formations above the stage and mounted at 90º angles in the show’s iconic ParaCube wall.  “The units are used as aerial beam effects, overall stage washes and, as unconventional as it may seem, also key light for several intimate moments in the show,” Dierson explains.

He believes that the Sharpys have brought “a definitive look to the show. We were looking to create a very masculine and aggressive look to the overall design, and the Sharpy's tight beam, prismatic effects, fast movement and unrivaled output made it the obvious choice.”

But the fixtures can also showcase Drake’s softer side.  Although Dierson tapped the Sharpys’  “speed and raw output to put forth very aggressive looks” he also capitalized on “the beam’s aerial image quality and consistently repeatable positioning to produce some very intimate moments.”

Over the course of the tour, which commenced in February, the Sharpys have “performed flawlessly,” according to Dierson, who has experienced similar results from other shows on which he’s used the lights.  “The competing products simply can’t match Clay Paky’s reliability, particularly in harsh environments.

Sharpys’ unmatched reliability and beautiful quality of light output continue the legacy for which Clay Paky has always been known,” he adds.  “I’m very much looking forward to whatever new tools they’ll be releasing this year.”

Francesco Romagnoli, Clay Paky Area Manager for North and Latin America, adds, “Patrick is an excellent and creative designer, we’re please to see him using our lights on so many of his projects.”