Clay Paky Sees Top Ratings on ‘The Voice’ in Australia 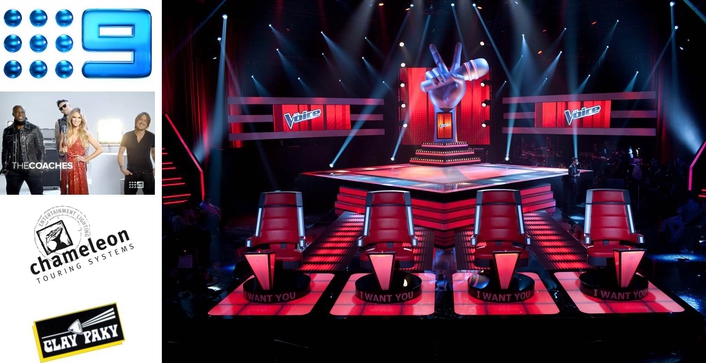 .
A huge rig of Clay Paky luminaires, supplied to Australian lighting designer Hugh Taranto by Sidney based Chameleon Touring Systems, is beaming a rock ‘n’ roll look into millions of Australian homes as the country’s version of hit TV show ‘The Voice’ kicks off.

Lighting designer Hugh Taranto – who has lit some of Australia’s biggest events including Coldplay at the Sydney Opera House, the Nickelodeon Kids’ Choice Awards and Sydney’s Astra Awards – is harnessing the power of 40 Clay Paky Alpha Profile 1500s and 48 Clay Paky Alpha Beam 700s to dazzle audiences across the country.

The set and lighting design follow the template of the overseas versions of ‘The Voice’, which originally hails from the Netherlands. Filmed in daylight colour temperature, ‘The Voice’ sparkles under the effects of the Clay Paky Alpha Profile 1500 fixtures, which Taranto is using as key lighting for the various hosting positions on stage. The range of effect and projection options offered by the Clay Paky Alpha Spot 1500 fixtures, along with their high luminosity, sharpness of image, richness of colour and graphic effects are all features that help Taranto’s creative vision become a reality.

“They’re very good for that as they have an even colour temperature and the shuttering system is very useful,” he comments. “We also use them for effects lighting during the performances where their gobos and colours get a work out. It’s a great light, bright and with fantastic optics.”

Taranto also specified 48 Alpha Beam 700s, which he has scattered throughout the rig. Conceived as an automated ACL to create parallel light beams, they are visible even in the brightest scenes.

The producers wanted a rock concert feel to the lighting and the Alpha Beams really deliver that ACL beam rock’n’roll look,” says Taranto. “We’ve used them from the first show and steadily increased their number to forty-eight to create the feeling of being in an arena watching a rock concert. As an effects and beam light they’re absolutely amazing and can really punch through. They are also quite small and light which makes them ideal for integrating into sets.”

The Australian Channel 9 ratings winner is broadcast from Sydney’s Fox Studios and features Delta Goodrem, Seal, Joel Madden and Keith Urban as coaches and mentors in the quest to find Australia's next great voice.

Pio Nahum, chief commercial officer for Clay Paky says: “It’s great to see the distinctive lighting effects that the Clay Paky luminare can deliver become synonymous with a show that has become so popular worldwide. Clay Paky prides itself on providing unique design tools that add value to any show and, as in the case of ‘The Voice’, can deliver a look that is as integral part of the show’s branding as the revolving chairs!”