Forming part of the Samsung Galaxy S4 World Tour, the Galaxy S4 was launched to the South African market at the Sandton Convention Centre in Johannesburg recently and attended by some 2 000 guests.

The elaborate event, which Clay Paky Alpha Spots and Sharpys have helped to illuminate, consisted of two parts; a formal conference followed by a spectacular surprise party where the entertainment included everything from aerial acts to ballerinas in LED tutus and popular DJs. Lighting was breath-taking.

This was the largest event Victor Vermaak from AV Unlimited (AVU) had worked on as Production Manager. It was also the proudest moment of his career so far. AVU were commissioned to supply the full technical.

The greatest challenge for Vermaak and Garrith Castelyn (AVU’s in house creative and designer) was designing a concept that would fit into the budget without losing the essence of the concept pitched. Top prize would be incorporating the extras that would change the look of the event completely, one of them being a cleverly designed LED “chandelier” that made up a part of the elaborate DJ booth and stage centre to the after party room. 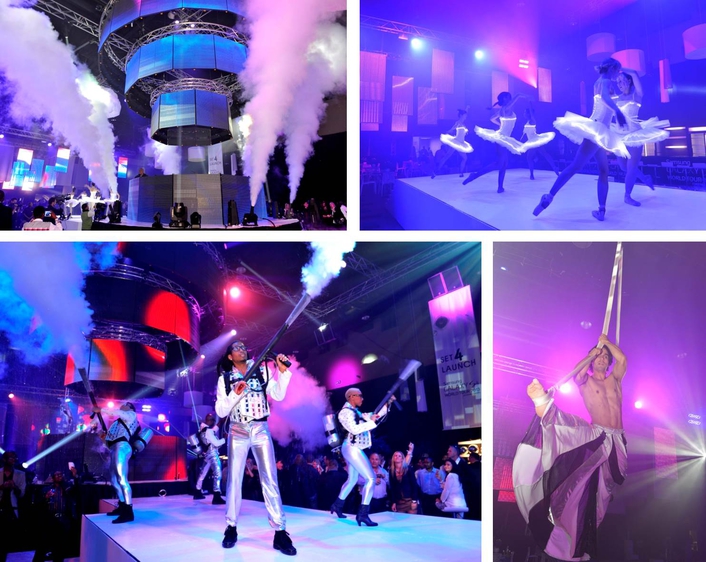 A mere two weeks prior to the event, AVU received the green light from their client, Mela Events to go ahead with the full concept. “I actually knew from the beginning when I sent out the hopeful budgets that the show would be amazing,” said Vermaak. “When they signed it off and the Lighting Designer, AVU’s very own Renaldo Van De Berg, had all the fixtures on his dream list, I knew it could only go well.”

On a show of this calibre and with all the innovative technical ideas it made sense to call in the experts in the fields! The DuoLED screens were supplied and installed by LED Vision and LazerX was contracted to supply all the lasers for the show.

The Pavillion room at the Sandton Convention Centre was stratigically divided into two allocated areas. In fact, when guests attended the conference and reveal of the new smartphone, they had no idea that a curtain on a 35m electronic track, would open after the launch and they would escape to world of colour, music and sensation.

“We had Sunday, 21st April for rigging,” said Vermaak. “There were five riggers and 116 points. All rigging and trussing was flown.”. The kit was loaded in and set up on Monday and Tuesday, with a full day’s rehearsal on Wednesday and Thursday. The official event took place on Thursday evening.

Conference Area
Dividing walls isolated the conference area. Mela Events, wanting to create an intimate atmosphere, added a ceiling made from Honeycomb mesh and brought in by Afresh, the contracted décor company. It served as a versatile surface onto which lighting could be projected. The cinema style seating saw presentations projected onto an enormous 34m screen, and the event was further complimented by musicians playing background music on either side of the stage – which was the same length as the screen. Feelancer Ligting Operator, Johnny Scholtz used soft colours and an Avolites Tiger Touch to create a clean corporate feel. 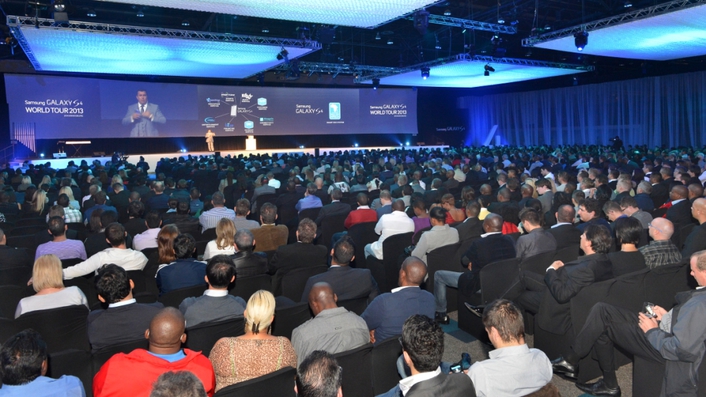 Entertainment / Party Area
At a touch of a button, the curtains revealed the festivity zone. “The best part of the whole event was setting up and seeing everything come together as we had planned,” said Renaldo van der Berg. He had chosen specific lighting fixtures, amongst others Clay Paky, for the event. The Clay Paky Alpha Spots, in particular, caught v d Berg’s attention and he loved the brightness, function and gobos of the unit.

In the centre of the room, a DJ booth had DJs Fresh, Euphonic, Roger Goode and DJ Luis playing to a full dance floor surrounded the DJ booth, and it was imperative to have brilliant lighting all around.  The show incorporated marvellous flying acts, dancers and performers using CO² cannon guns to blast the audience. The rig was symmetrical and while often two acts would perform simultaneously on either side, each was lit with a totally unique look.

At the end of the day, careful planning saw Production Manager Victor Vermaak, strike gold.  “You’re only as good as the team you choose,” he said. “Everything was so well planned and executed, I almost felt like a third wheel. Each person knew what they had to do and they did it.”