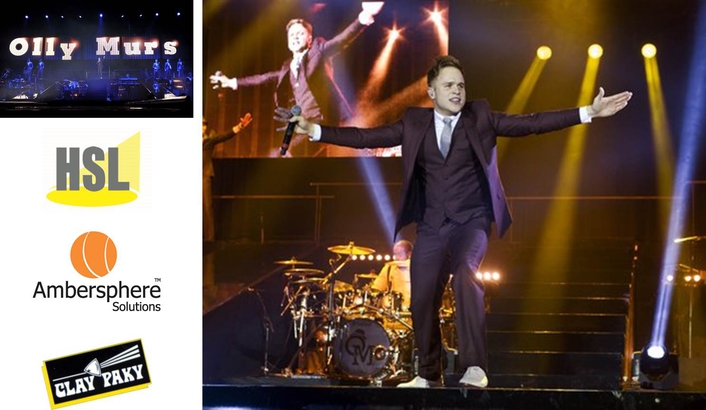 .
One of the UK’s biggest pop sensations is dancing his way around Britain’s biggest arenas in the sharp focus of 24 shape-shifting Clay Paky Sharpys.

Multimillion-selling artist Olly Murs is benefitting from the pure-beam brilliance of the high output Sharpys in a live show with lighting design by the UK’s ‘guru of pop lighting design’ Peter Barnes.

“I needed a fixture I could mount on the trussing picture frames around the LED screens that was small enough to ensure that the body of the lamp remained within the dimensions of the truss. The fixtures also needed to be light enough that we could out-rig them from the face of the trussing without tipping the frame off balance,” explains Barnes. “As well as being light and small they needed to deliver a brightness that could compete with all the LED in the set.”

The Sharpys were supplied to Barnes by HSL, Project Manager Mike Oates comments: “The Sharpys helped to create the bold and dynamic look of Pete’s design. It’s a great and reliable fixture and they’re in constant demand - we struggle to turn them around quick enough in between jobs!”

Weighing in at just 19kg, the Clay Paky’s Sharpy is already a must-specify for many lighting designers across all sectors,” adds Glyn O’Donoghue, managing director for UK distributor for Clay Paky, Ambersphere. “Today LDs are looking for a fixture that will add a powerful, punchy impact to shows that are designed around bright LED screens and ensure the performer on stage remains the focus of the show.”

Murs, whose hits include Dance with Me Tonight, performed at Britain’s biggest arenas, including London’s O2, Liverpool’s Echo and Motorpoint in Cardiff.