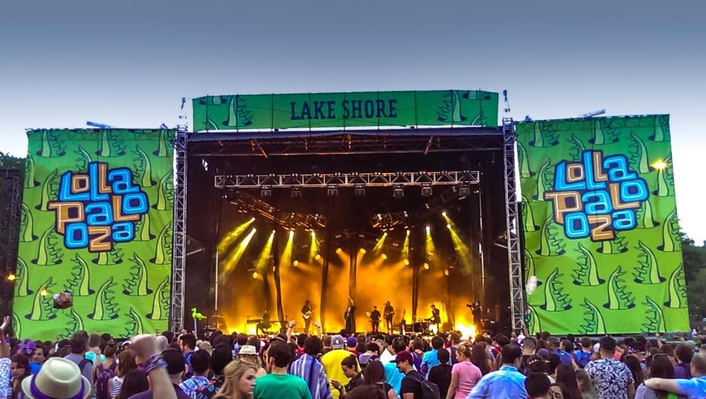 Lollapalooza was held July 31- August 2 and headlined by Eminem, Outkast and Lorde with hundreds of other performers and bands on hand for the three-day celebration of alternative rock, heavy metal, punk rock and hip hop.

Lighting designer/lighting coordinator Seth Jackson did plots for Lollapalooza’s four stages working with the lighting designers who accompany the bands.  “It’s a three-month process going back and forth with the bands,” he explains.  “This year we had 10 B-EYEs on two of the stages, supplied by LD Systems, on the Lake Shore and Grove stages.”

Lollapalooza marked Jackson’s first time using B-EYEs.  “I had seen a demo of the fixtures and was really excited about them,” he says.  “Most of the bands’ lighting designers hadn’t seen them before either.  But it’s been great fun to see how every designer has used them, and they all love them.”

Jackson mounted all the B-EYEs on the upstage truss with a lot of smaller fixtures in between.  “The idea of those two stages was to look big but not be big,” he says.  “I had the B-EYEs upstage looking down on a pyramid creating this monster wall of color and movement in the back.  They powered over all the other fixtures in front of them.”

The B-EYEs also stood out from a distance.  “If you were on stage at the other end of the field you could see them even before it got dark,” he reports.  “It was really nice to see them cut through at that distance.”

Jackson says the fixtures not only “looked great” but “performed beautifully.  There were no issues at all with the mechanics, and LD Systems was pleased by the simplicity of getting the fixtures in and out.  Everybody at the festival was very happy with the B-EYEs.”

Francesco Romagnoli, Clay Paky Area Manager for North and Latin America, commented, “We’re glad to see Mr. Jackson working with our B-EYEs and look forward to seeing what else he may do with them.”