Clay Paky with the Artists of “Afrikaans is Groot” 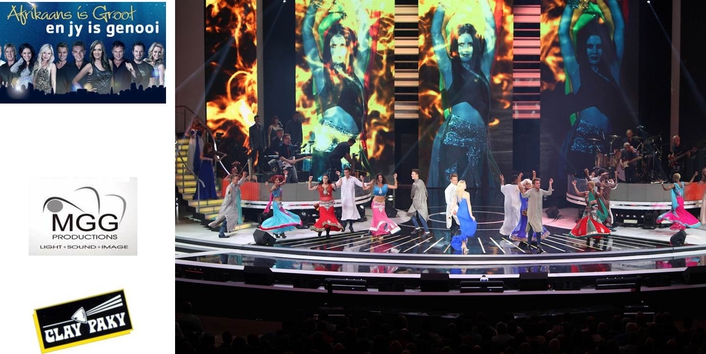 .
Within just six hours of ticket sales opening, the Pretoria leg of ‘Afrikaans is Groot’ was sold out.  Just goes to show how Groot Afrikaans is’! The Cape Town leg followed suite with its three performances selling out by the end of that day.

Featuring this amount of talent meant that the set and production for both the Moreleta Park Church Auditorium and the Grand Arena, GrandWest, had to be on point. Designed by Michael Gill and built by Gearhouse SDS, the set was the perfect balance of light and metal finishes. With concentric circles and strips of light built into the stage, the focus was drawn to each of the performances. To reach as many audience members as possible, two round performance platforms either side of the stage extended the performance area. 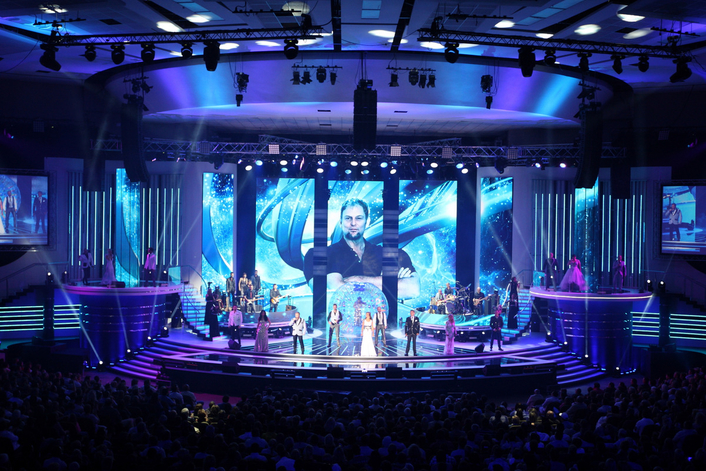 A production of this magnitude is no mean feat. It was for this reason that the team called on, for a second consecutive year, the impeccable Project Management skills of Denzil Smith. Smith’s meticulous planning, along with his passion ensured that his MGG team, the sole technical supplier, put many hours of hard work into the pre-production and build. The result of such efforts was a definite level of professionalism.

The lighting was conceptualised and programmed by Mauritz Jacobs of Dream Sets. Jacobs thouroughly enjoyed the task due to the fact that Coleske Artist’s ‘Afrikaans is Groot’ is not like any other show. His preparation included listening to the play lists and watching previous recordings of the show. The basic objective was to light for a fantastic live show that had 5 LED Walls to compete with, and also light for the DVD recording.

After a month of programming, the final week of preparation took place at the premises of Coleske Artists. Jacobs worked closely with Arnold Coleske where Jacobs fondly stated “From the start, I enjoyed the Coleske Brothers and from the word go we got on well”. 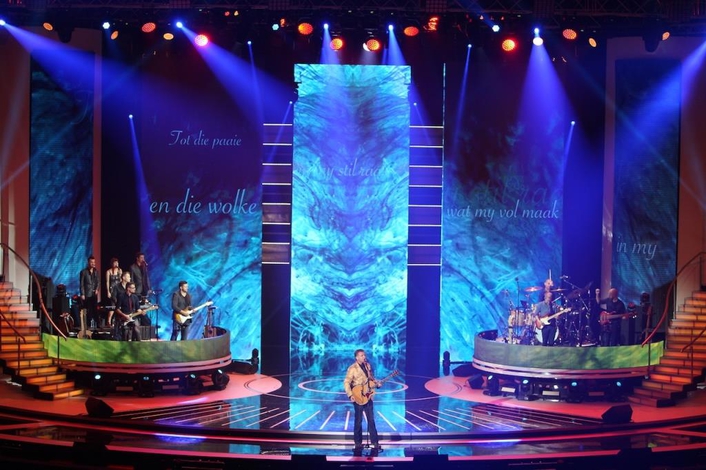 The best part, for both Jacobs and Smith, was the energy leading up to the show. With that many die-hard fans, it was no wonder that the excitement was tangible.

Not only were the audience and the performances phenomenal, but the team that pulled this show together was too. With a project of that magnitude, it’s all about team work “If everyone didn’t pull their weight, it wouldn’t have succeeded,” said Jacobs.

A special thank you must go to the entire team from MGG Productions, and to Herman Wessels and Marcell Wahl whose efforts did not go unnoticed.