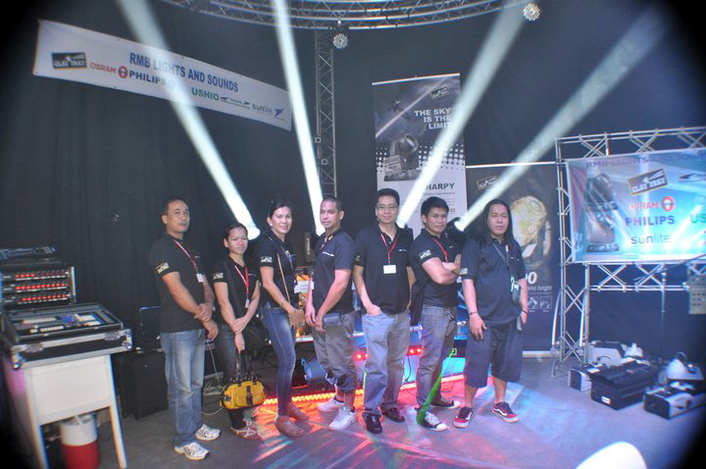 .
Professional entertainment lighting manufacturer Clay Paky has appointed RMB Lights and Sounds as its distributor in the Philippines. Serving the theatrical and television industry for twelve years, RMB is a wholesale provider of specialty lamps throughout the Philippines.

“By working alongside RMB, I am certain that Clay Paky will become an increasingly visible brand in the Philippine market and surrounding regions,” said Massimo Bolandrina, Clay Paky Sales Manager for the region. “This relationship has come about as the result of RMB’s regular use of Clay Paky products on a number of high profile projects in the region and the excellent product support the company offers to its clients.”

Clay Paky’s innovative fixtures are no strangers to the Philippine entertainment industry. The manufacturer partnered with RMB Lights and Sounds in 2011 to bring Clay Paky’s popular Sharpy fixture to several major projects including: Party Pililinas, ASAP Rocks, and WillTime BigTime - all appearing on major television networks in the Philippines. In 2012 Clay Paky fixtures supported the expertise of lighting designer Ms Skakira Villa Symes at New Year’s events with the Republiq Club Resort, the Tanduay RockFest at the SM Mall of Asia and the Requiem Concert at the NBC Tent.

“I’ve always been impressed with the innovation, quality, and feature sets of the products plus the backup service I’ve received from the Clay Paky team,” says Mercedes L. Rufino, RMB’s Vice President and Marketing Director of RMB.

Rufino has been specifying the Clay Paky product on RMB projects since 2010 and is delighted by the new partnership saying: “There’s no doubt that Clay Paky fixtures offer exactly the type of product our market is crying out for. The construction quality, reliability and performance of the fixtures are second to none.”

Originally named Nictron Marketing, RMB Lights and Sounds has been a wholesale provider of special lamps for television studios and projector lamps since 2000. In 2002, the company started importing audio equipment and entertainment lighting while opening the company’s first store at “Raon, Quiapo”, the Electronics capital of the Philippines. Now located in Quezon City, RMB Lights and Sounds has a vision of delivering high quality products and excellent after sales service. In the future, RMB is planning to have units available for rental to stage and lighting companies, TV Stations and the theatre industry. In addition, RMB is planning product installations in hotels, restaurants, cinemas, theme parks and entertainment venues.

The partnership between Clay Paky and RMB promises to have excellent benefits for both companies as Clay Paky products continue to gain visibility in the region.