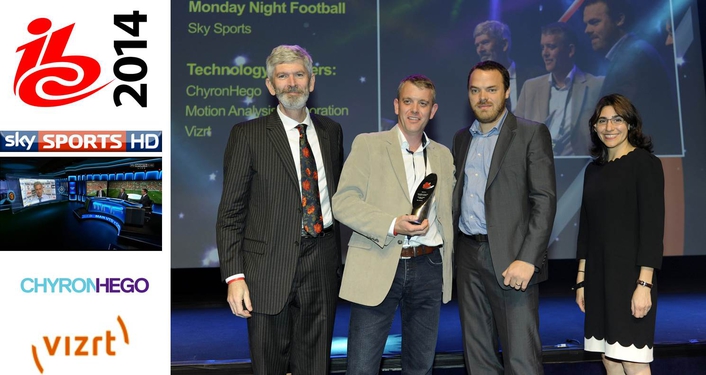 Vizrt's Rex Jenkins accepted the award along with Mike Ruddell from Sky Sports, Mark Bowden from ChyronHego and Carolyn Giardina
Vizrt, together with Sky Sports and ChyronHego, win the IBC 2014 Innovation award in a ceremony held at the Amsterdam RAI during IBC2014.

Vizrt worked with Sky Sports and ChyronHego to create a unique studio production for their flagship production “Monday Night Football” (MNF). The production that aired first on August 19th 2013 is a game-changing evolution of the show which premiered in 1992 when Sky Sports first first obtained English Premier League rights. The key innovation that led to the award was the creation of a virtual set that gave the illusion of having a much larger physical set in the MNF studio.

The award ceremony, held Sunday, September 14th at the Amsterdam RAI, featured several awards for innovation in broadcasting. Vizrt's Rex Jenkins accepted the award along with Mike Ruddell from Sky Sports, and Mark Bowden from ChyronHego.

Building a a new studio
A unique requirement of the Sky Sports studio is that the virtual studio graphics should sit alongside and to be visually-indistinguishable from the physical-set elements. This meant that not only must the graphical rendering be ‘photo-real’ but the tracking must be accurate enough so that when cameras move, the rendered virtual graphics would exhibit a seamlessly blend between with reality and virtual.

Sky’s creative team have been designing Vizrt 3D graphics for live coverage for over 10 years, so they are accustomed to designing in Viz Artist. However, the concept of  Virtual Studio design to this degree of photo-realism was new. Given the design-complexity of the 3D studio design and required functionality built into it, care had to be taken to ensure graphics-rendering performance was optimised to run in real-time.

The result was a genuine collaborative effort, not just on implementing the design, but also with the Sky Engineers who needed to learn how to operate and support the new technology. From the time when the installation started and to the first live-broadcast show in August 2013, regular training-sessions were conducted for Sky designers and technical staff at Sky and the Vizrt UK staff.

The final on-air product is a studio which appears massive in size but also very flexible, allowing the Sky MNF presenters to have several set locations. The presenters could utilize data driven-graphics displayed in monitors or immersed into the studio as part of the virtual set. Using a tracking system by MotionAnalysis, the virtual set was able to be tracked with extreme precision, allowing the physical and virtual set appear seamless as the camera pans from one part of the set to another. 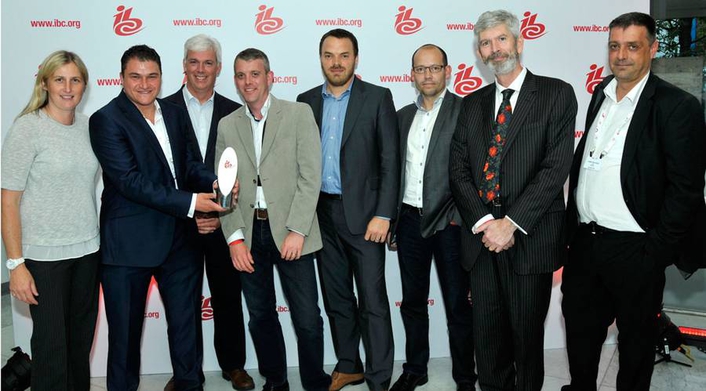