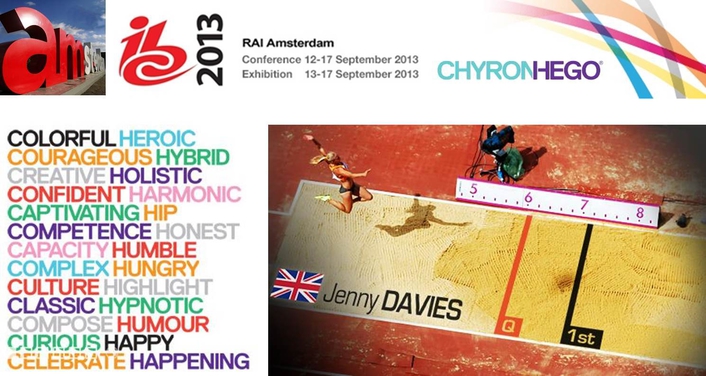 .
“IBC2013 marks a very exciting time for ChyronHego as we will debut our all-new company and complete product line to the European, Middle Eastern and African markets. We're looking forward to impressing visitors with powerful solutions for sports, news, and live television, including our latest in graphics creation and playout, player tracking, sports analysis, virtual product placement — and everything in between. ChyronHego remains focused on developing innovative, flexible and reliable products and services that help broadcasters deliver high-quality content that engages their viewers.” — Michael Wellesley-Wesley, CEO at ChyronHego

TRACAB Image Tracking
The TRACAB Image Tracking System™ uses image processing technology to identify the position of all moving objects in a sports arena in real-time. The outcome of the analysis is a data feed with X, Y and Z coordinates for all objects. Data can be streamed to various visualization platforms such as broadcast graphics and second screens, and can be used to prepare comprehensive sets of performance statistics. The system is based on stereo vision technology and features two small multi-camera units.

AKI Paint
AKI Paint is an advanced telestration tool that produces impressive analysis graphics with ease of use and rapid turnaround times. The system features a 3-channel built-in clip recorder, as well as a keyer that allows the user to easily add virtual tied-to-surface graphics. AKI Paint also features camera motion tracking that allows graphics to remain in the same position even when the camera moves away, a rich set of easy-to-use tools that are customizable to look and feel, and a user-friendly interface that is easily accessible during production.

Virtual Placement
Virtual Placement is a powerful tool for adding virtual graphics to video in real-time without the need for camera sensors. Ideal for use in studios and outdoor product placement, Virtual Placement allows the user to easily incorporate clips, animations, images, texts and live video sources into a 3D space that is extracted in real-time from up to three simultaneous live cameras. It also features a built-in keyer that allows for the positioning of objects behind or under objects in the actual video. The system requires minimal calibration and features additional sports-specific packages for virtual enhancements.

AKI GS2 Multi-Touch
The GS2 Multi-Touch studio touchscreen platform is a combined product and service offering that puts state-of-the-art touchscreen technology in the hands of the presenter. This interactive offering boasts features including a built-in second output, EVS control with thumbnail browsing, Red Bee Piero remote control, and the ability to display up to twelve outputs of live video with full touchscreen capability. Touchscreen can also be used for data sharing with leading sports data provider, Opta Sports, and others.