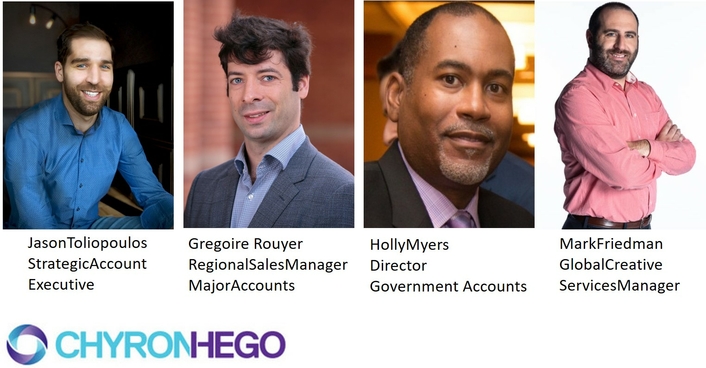 "We're pleased to welcome these high-caliber sales and creative professionals to our Americas broadcast team. All four bring stellar expertise, relationships, and experience built through many years of working with high-profile broadcasters and broadcasting technology companies," said Marco Lopez, CEO of ChyronHego. "As momentum continues to build throughout the Americas for our world-class graphics solutions, we're confident that this team will help us cement our leadership in the region."

Jason Toliopoulos is transitioning into a new role as strategic account executive after serving over four years as ChyronHego's manager of creative services. In his new position, he will be managing some of ChyronHego's largest strategic accounts in the U.S and Canada. In addition, Toliopoulos will manage both direct and channel sales in Canada. Toliopoulos is an 18-year veteran in the broadcast industry, having worked as a creative director for Canada's largest broadcasters — including CBC, CTV, and TVA. Toliopoulos also holds a bachelor's degree with honors from Ryerson University, where he taught design and special effects prior to joining ChyronHego.

As regional sales manager, major accounts based in Los Angeles, Gregoire Rouyer will oversee key broadcast accounts and drive company growth by identifying new market opportunities and potential clients. He joins ChyronHego from Dalet Digital Media Systems, where he had served since 2010 in a range of engineering, project management, and sales management roles. Most recently at Dalet, he was a sales account manager based in Los Angeles. Royer holds degrees in information, energy, and systems engineering from École Supérieure d'Électricité in Paris, and he is an MBA candidate at the UCLA Anderson School of Management in Los Angeles.

Based in Washington, D.C., Holly Myers will leverage his strong relationships with Department of Defense (DOD) and civilian federal agency decision-makers and contractors to build ChyronHego's presence in the government sector. Myers served at Sony for 16 years as account manager, federal sales, where he managed multimillion-dollar technology upgrades with agencies such as the DOD, the White House, Voice of America, the Department of Health and Human Services/National Institutes of Health, and the Department of Homeland Security. Just prior to joining ChyronHego, he was regional account manager, federal sales, for Strategic Communications. He holds a bachelor's degree in marketing from James Madison University.

As global creative services manager, Mark Friedman will work with broadcast customers around the world to engage with audiences that use ChyronHego's award-winning graphics-rendering technologies. Prior to joining ChyronHego, he served 10 years with NBC Sports Washington, most recently as director of creative services and advanced technologies. He joined NBC Sports Washington as creative producer in 2009 and also served as its manager of technical innovation. Before that, Friedman was executive producer at 3plus2 Creative for eight years, where he specialized in in-venue graphics solutions for stadium and arena scoreboards. He was also the former associate producer at the YES Network. Friedman holds a bachelor's degree in history from Washington University.