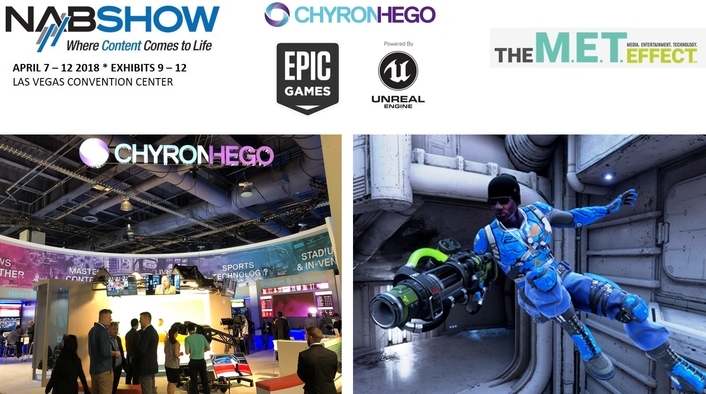 ChyronHego announced a partnership with leading game developer Epic Games to integrate the Unreal Engine with ChyronHego’s family of augmented reality (AR) graphics and virtual set solutions. With the integration, news broadcasters and other customers of ChyronHego’s Neon and Plutonium software will be able to leverage Unreal’s industry-leading rendering and real-time special effects capabilities to add powerful new photorealistic and hyper-realistic elements to their on-air virtual sets.

“In an environment that’s more competitive than ever, our broadcast news customers are on a constant search for innovative ways to tell a better story and captivate viewers,” said Olivier Cohen, senior product manager, virtual solutions, ChyronHego. “Virtual sets that harness the amazing graphics capabilities of world-class gaming engines are the wave of the future for news, sports, and weather broadcasting, and Epic Games is the perfect partner to take us there. The integration with Unreal is just the latest link in our CAMIO Universe strategy to place the industry’s most powerful storytelling tools at news producers’ fingertips and drive template-based, unified news and weather workflows.”

“Since we launched Unreal Engine 4, it has become one of the world’s most powerful rendering engines for the game industry — but its flexibility, real-time performance, and robust set of tools make it ideal in just about any type of content creation workflow,” said Marc Petit, general manager, Unreal Engine Enterprise at Epic Games. “ChyronHego’s AR and virtual set solutions for broadcast production are the ideal match for Unreal Engine. By partnering with one of the leading broadcast graphics providers, we can continue to expand our presence in the broadcast, film, and entertainment industries.”

Cohen added, “As one of the world’s most powerful rendering engines from one of the world’s foremost gaming companies, Unreal will bring new levels of openness and scalability to our virtual set solutions. Unreal Engine is easily customizable and expandable, and five million users around the world will benefit from Epic Games’ vast reach across the global community of gamers and game developers. It means news broadcasters will be able to render effects in their virtual sets that rival anything their viewers have seen in the gaming world, with special effects like real-time shaders, bumps, sliders, and highly photorealistic objects.”