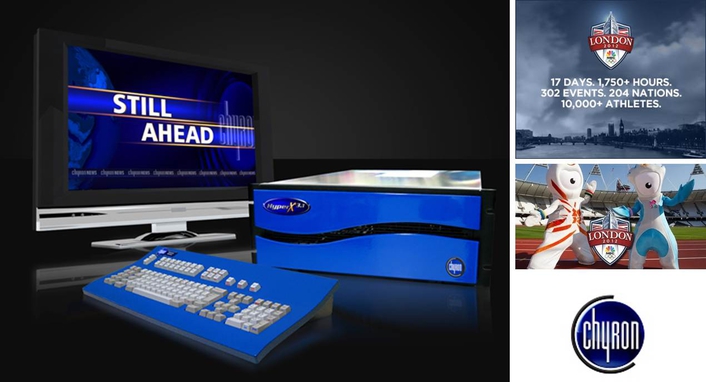 "In our operation, there's no room for error, and every second counts. The centralized asset storage capability powered by Chyron's HyperX³.¹ and Apple®'s Xsan 2 is a tremendous time-saver, enabling our operators to instantly access media assets that were once only available to the Mac® systems," Paully said.

NBC Olympics worked closely with Chyron and Dynamic Performance Technologies to integrate this powerful graphics workflow solution. After building graphics elements in Adobe® Creative Suite®, the NBC Olympics production team is able to move them seamlessly to editing suites and then to devices for playout to air. Since HyperX³.¹ supports Adobe's XMP metadata platform, artists are able to embed critical information about each graphical element, for instance, the correctly spelled name, age, and home country embedded in a specific athlete's head shot.

The finished graphics can then be instantly accessed by the HyperX³.¹ operators by clicking a folder from their workstations, a capability that previously was only possible by searching for the assets on a server and then downloading them into the playout system. Any changes to image metadata need only be made once, and the metadata fields are automatically populated at every point at which the graphic will be used. When the graphic is inserted into the programming, the accompanying metadata is automatically extracted and displayed, so NBC Olympics' production staff no longer needs to worry if names are spelled correctly and information about the graphic is accurate.

"This summer's London Olympic Games promise to be a record-breaker, with more than 3,500 hours of broadcast content over a 19-day period from more than a dozen different sports venues. Since much of this programming will be produced live, accuracy and efficiency is critical to success," Morrone said. "We are honored to provide NBC Olympics with state-of-the-art HyperX³.¹ graphics playout systems integrated with Adobe's XMP and Apple's Xsan 2 for their production of the London Olympics."

About NBC Olympics
WA division of the NBC Sports Group, NBC Olympics is responsible for producing, programming and promoting NBCUniversal's Olympic coverage. It is renowned for its unsurpassed Olympic heritage, award-winning production, and ability to aggregate the largest audiences in U.S. television history.

NBC has won an unprecedented 91 Emmy Awards for its Olympics coverage, as well as a prestigious Peabody Award for its presentation of the Beijing Opening Ceremony in 2008, which USA Today said was "the best overall Olympic experience ever provided by a U.S. network."

In addition to its unsurpassed heritage and award-winning production, NBCUniversal is known for aggregating large Olympic audiences, as nine of the top 11 most-watched U.S. television events of all time are Olympic Games presented across the networks of NBCUniversal. The Beijing Summer Olympics rank No. 1 with 215 million viewers.