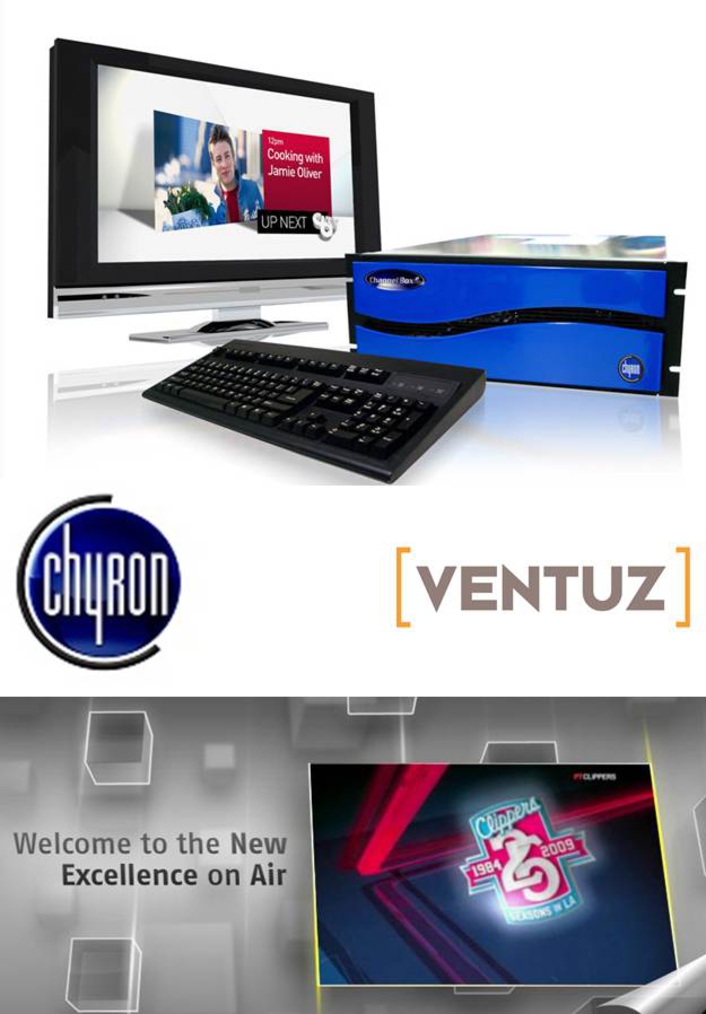 Industry Leaders in Broadcast Graphics and High-End Live 3D Presentation Graphics Team Raise Bar for Interactive OnAir Graphics
Chyron and German software developer Ventuz Technology AG today announced that they are entering into a strategic technology partnership. Ventuz is known for 3D real-time software, which is used predominantly for high-end presentations, interactive applications, and on-air graphics. Through this important partnership, both companies will expand the range of live graphics solutions they can make available to their customers.

"This partnership combines the world's best technology for graphics presentation with the industry standard for broadcast graphics technology," said Joachim Sturmes, CEO at Ventuz Technology. "With these solutions, our customers can take interactive data-rich presentations to a level never before seen in the broadcast realm."

Ventuz software provides an easy-to-use authoring environment for high-end video, animation, and 2D/3D graphics playback and control in an interactive setting. The software suite is the gold standard of the presentation market, and has been employed to bring style, sophistication, and innovation to many of the world's most prestigious brands. The partnership between Chyron and Ventuz will build on the proven, scalable, and widely deployed Chyron broadcast infrastructure that already is well-established in the broadcast market, bringing broadcasters an added degree of versatility and creativity in dynamic real-time graphics for live events such as news, elections, sports, and entertainment programming.

"Ventuz is an impressively flexible tool for creating visually stunning interactive in-studio applications," said Michael Wellesley-Wesley, president and CEO at Chyron. "We're very pleased to be working with the company as its software opens up an exciting new range of possibilities for both new and existing Chyron customers around the globe."

About Ventuz
Ventuz Technology AG, located in Munich, Germany, is developer of 3D real-time technologies for presentations, events, and TV graphics. The company's main goal is the creation of solutions that combine state-of-the-art technologies with high-class design, thus surpassing the visual expectations of any audience. A central focus lies on interactive applications. Among the brands that have used Ventuz for their events and presentations are Microsoft, Porsche, Bosch, Adidas, and many more. Furthermore, several TV stations and production companies worldwide are utilizing the broadcast version of Ventuz, such as Fox Sports. Some of the best known productions which have been produced with Ventuz are "Who wants to be a millionaire?," "Million Pound Drop" and "Big Brother."

About Chyron
Chyron is a leading provider of Graphics as a Service for on-air and digital video applications including newsrooms, studios, sports broadcasting facilities, and corporate video environments. An EmmyÂ® Award-winning company whose products have defined the world of digital and broadcast graphics, Chyron's graphics solutions include the Axis World Graphics online content creation software and order management system, on-air graphics systems, clip servers, channel branding, and graphics asset management solutions, all of which may be incorporated into the company's BlueNet™ end-to-end graphics workflow.