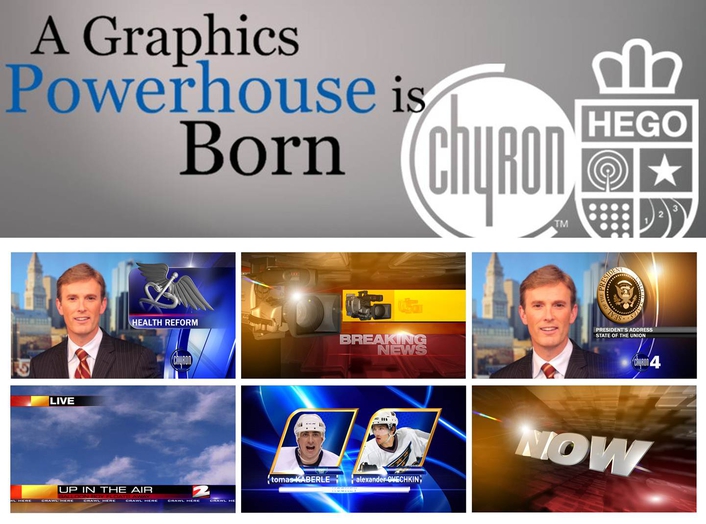 New Driving Force in the Fields of TV Graphics, Data Visualization and Production Services for Live TV, News, Sports Production
Chyron Corporation (NASDAQ: CHYR), a leading provider of Graphics as a Service for on-air and digital video applications, today announced that it has signed a definitive agreement to acquire Hego AB and its subsidiaries (collectively, “Hego Group”), a leading provider of powerful graphics and data visualization solutions for TV and sports. Hego Group is a privately-held company with its headquarters in Stockholm, Sweden, and has operations in Norway, Finland, Czech Republic, UK and USA. The combined company will be rebranded as ChyronHego.

“The merger of Chyron and Hego brings together two pioneering companies to create a global leader in broadcast graphics creation, playout, and real-time data visualization. This is a truly transformative transaction for Chyron,” said Michael Wellesley-Wesley. “By combining the teams and resources of Chyron and Hego, we will deliver to our customers a highly diverse and compelling broadcast graphics capability.”

The Chyron and Hego product lines are complementary with very little overlap. Hego’s solutions predominantly address the needs of live sports production with product categories such as Augmented Reality and Virtual Product Placement, Telestration, and Production Services offerings based around their proprietary Image and Player Tracking solutions. For its part, Chyron has recently been more focused on graphics solutions for live and near-live news production workflows. Upon consummation of the transaction, it is anticipated that ChyronHego would vault to second place in terms of global market share.

Mr. Wellesley-Wesley also added, “Hego is a well-managed, fast growing, profitable company with state-of-the-art products. ChyronHego will be focused on near- and long-term value creation for its shareholders, and we believe its comprehensive and competitive product portfolio will quickly make it a market leader in our industry.”

“With this merger, we are looking forward to integrating Hego and Chyron solutions and working together to innovate new products and services,” stated Johan Apel, chairman and CEO of Hego Group. “Our objective is to develop powerful, easy-to-use solutions for sports, news and live TV. Hego has grown quickly over the last few years but this merger takes us to a whole new level, especially in North and South America where our offerings have been generating significant interest. We’re excited about this combined company and I believe that our customers are the real beneficiaries.”

About Hego Group
Founded in 1969, Hego has spent over four decades helping broadcasters and the sports industry offer audiences a more engaging live entertainment experience. Hego has a reputation for being at the forefront of enhancing the presentation of live data and video through its innovative technology in real-time graphics, virtual graphics, touch and telestration, as well as its revolutionary 3D player tracking system. These capabilities are delivered either as products or as full production services.

About Chyron
Chyron (NASDQ: CHYR) is a leading provider of Graphics as a Service for on-air and digital video applications including newsrooms, studios, sports broadcasting facilities, and corporate video environments. An Emmy® Award-winning company whose products have defined the world of digital and broadcast graphics, Chyron’s graphics solutions include the Axis World Graphics online content creation software and order management system, on-air graphics systems, clip servers, channel branding, and graphics asset management solutions, all of which may be incorporated into the company’s BlueNet™ end-to-end graphics workflow.