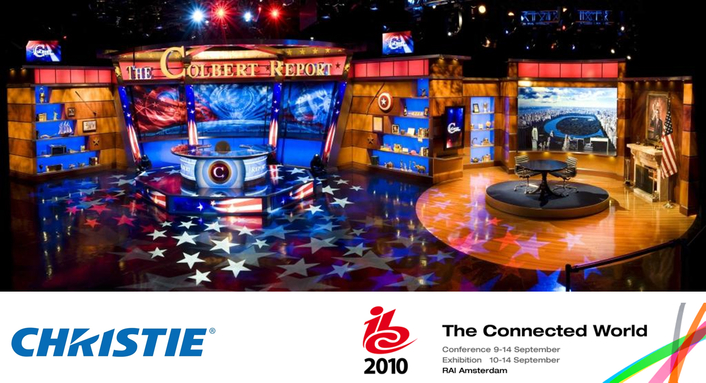 Christie at IBC Stand 11.E72
Christie has announced that at IBC it will be presenting the recently launched Christie Mirage WU7K-M, the future of 3D projection technology, that displays stunning 3D images. 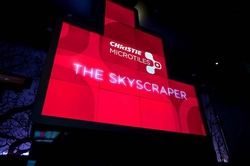 Christie is excited to show Christie MicroTiles™, the New Digital Canvas and recent winner of the Janus de l'Industrie Award 2010 from L'Institut Franчais du Design. Christie MicroTiles have already been used to great effect built into the set of The Colbert Report in a number of different shapes and sizes. Visit Christie in Hall 11, Stand E72, to see for yourself how these tiled arrays lend themselves to a variety of applications, demonstrating true versatility, limited only by your imagination.

Alongside to Christie's award-winning range of projectors, other new products on display at the Christie stand will include the very latest in Christie LCD technology projectors, which balance smooth colour tone and flawless video playback with exceptionally low power demands.

Both at the Christie stand and in the IBC Production Village, Christie are to demonstrate the capabilities of the Christie Entero™, winner of the 2010 InAVation Award for Most InAVative Commercial Display

Christie, a wholly-owned subsidiary of Ushio, Inc., Japan, (JP:6925), is a leader in visual solutions for world-class organisations, offering diverse applications for business, entertainment, and industry. A leading innovator in film projection since 1929 and a pioneer in digital projection systems since 1979, Christie has established a global reputation as a total service provider and the world's single source manufacturer of a variety of display technologies and solutions. With the acquisition of Vista Controls Systems, Corp., Christie offers the most complete and advanced solutions for cinema, live venues, control rooms, business presentations, training facilities, 3D and Virtual Reality, simulation and education as well as industrial and government environments.